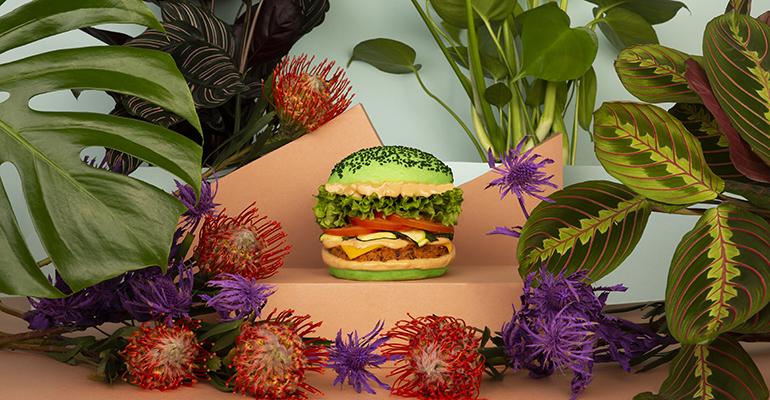 Flower Burger, the Milan plant-based burger concept, has landed in Los Angeles. The unit is helmed by Elena Platt and Barbara Lazaroff, famed restaurant designer and co-founder of many of Wolfgang Puck's early restaurants, including Spago, Chinois on Main and Granita. The concept’s defining feature is something customers won't easily forget: the buns range in color from bright pink to purple to lime green.

Elena and David Platt first discovered the concept after eating “too much pasta” on a trip to Italy and looking for a healthy alternative. That’s when they stumbled upon Flower Burger, a plant-based concept from Matteo Toto founded in 2015, in Milan. It seemingly brought fun to plant-based, better-for-you food.

The Platts, in partnership with Los Angeles entrepreneur and friend Lazaroff, decided to open the first North American outpost of Flower Burger as a delivery-only ghost kitchen with plans for a brick-and-mortar later this summer.

There are more than a dozen locations across Italy, France, London and the Netherlands.

Part of the “better-for-you” experience with the plant-based patties at Flower Burger is that the concept makes its own proprietary patties to avoid premade patties, which are often filled with artificial ingredients and high in sodium.

The buns, despite their unnatural colors, are also made of natural ingredients, no boxed dye. The chefs use foods that are naturally high in color pigmentation (beets, spirulina, turmeric and purple carrot extract to achieve the pink, green, yellow and violet buns respectively). The flour is imported from Italy. 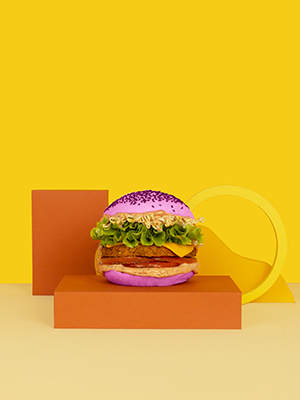 There are six plant-based burgers available at Flower Burger: The Jungle Burger, an oat and red bean patty with oven-baked zucchini on a green bun; The Classic Chickpea and the Spicy Chickpea, both chickpea patties on a yellow bun; The Tangy Chickpea, a chickpea patty with Tartarella sauce (Flower Burger’s vegan version of tartar sauce) flavored with capers and pickles; The Cherry Bomb, a lentil-based patty on a pink bun; and the signature Flower Burger, a red kidney bean patty on a violet bun.

Though the food is all plant-based (read: vegan) the Platts believe the food is appealing and tasty to those who eat meat as well, and they say that’s the whole point.

“Even if we can just get people to eat at Flower Burger or vegan once a week, it’s powerful. And we’re trying to not make it boring,” David said.

While the food is vegan and the Platts are “95% vegan” themselves, they don’t like using the word vegan. Rather, the entire menu at Flower Burger is plant-based to avoid the politicization of words like vegan and vegetarian.

Alongside the patties and social media-worthy buns, Flower Burger crafts plant-based proprietary sauces and cheeses, all vegan. Sauces and cheeses include: The Flower Cheddar (cheddar cheese), made with coconut oil; Flower Mayo, made from 100% Italian soy milk; Rocktail (thousand island dressing), made with ketchup, mayo and nori; and Wild Sauce, a plant-based barbecue sauce.

Sides include potato wedges, edamame, and Patatas Buenas drizzled with Flower Mayo and spicy ketchup. Desserts range from the Coco-nuts, a coconut-based frozen treat layered with espresso, cocoa-roasted almonds and hazelnuts, to the Chocolate Salami, a rolled and sliced confection made from dark chocolate and oat-based biscuits.

While Flower Burger is operating out of a ghost kitchen in Culver City at the moment, Elena and David have plans to open a brick-and-mortar location later this summer and expand in the coming years. They plan to use the ghost kitchen as a central kitchen, preparing patties and buns for locations across the city to expand at a rapid pace, according to David.