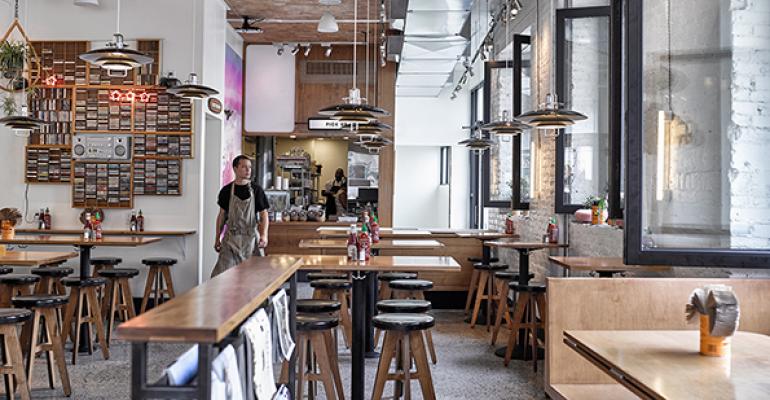 AvroKO Hospitality Group, the folks behind several terrific NYC restaurants (Public, Saxon + Parole and Genuine Roadside), recently opened a fast-casual version of the last concept. Called Genuine Superette, its menu focuses on “California roadside eats with a gourmet twist.” The space is reminiscent of the casual cafes and superettes lining the California coast. The restaurant has been outfitted to make seamless transitions between all meal periods with light fixtures that move up and down along with light levels to create both daytime and more intimate evening atmospheres. Chef Brad Farmerie created the breakfast, lunch and dinner menus, with contributions from two-Michelin-starred chef Paul Liebrandt, who offers his take on fish and chips. Pocket sliding menu boards allow for menus to be hidden or showcased, depending on the time of day. Award-winning pastry chef Sam Mason developed several sweet menu items, including a “real” ice cream sandwich using a brioche bun and a waffle iron. If that’s not enough, master mixologist Eben Freeman has developed a line of creative juices that can be converted into cocktails at night. This is not your daddy’s fast-casual spot. Here’s a look.