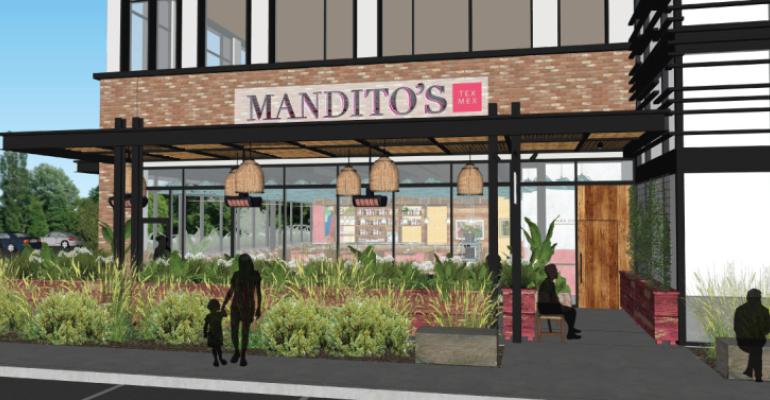 45 years after debuting its first restaurant, the restaurant group is hitting its stride

Armando Palacios opened his first restaurant in Houston’s River Oaks neighborhood in 1978. Armando’s has since become an iconic Tex-Mex restaurant that’s still thriving today and will celebrate its 45th anniversary this year.

For decades, Palacios operated his solitary restaurant, but in 2017 he and his wife Cinda opened Mandito’s, aka “little Armando’s,” in Round Top, Texas, about halfway between Houston and Austin. This casual, cantina-style version of their Houston spot serves fajitas, enchiladas, fish tacos, twice-refried beans and fresh margaritas.

“For me, business is all about timing,” Cinda Palacios, co-owner and CEO of Palacios Murphy Hospitality Group said.

Armando Palacios owned property in Round Top for 30 years, and many of their Houston customers have second homes, ranches or farms in the area. The couple were regularly encouraged to open a restaurant in the town, which sports a tiny population of only about 100 permanent residents but has visitor-friendly shops, galleries and restaurants, and draws hundreds of thousands of attendees to the twice-annual Round Top Antiques Fair.

Cinda Palacios calls Round Top a bucolic retreat from city life that draws an interesting demographic of visitors, and she compares it to the Hamptons or the Cotswolds for Texans. When she and her husband were approached about taking over a Tex-Mex restaurant that was closing, they took the plunge.

“We decided it was a good idea to diversify our company should anything ever happen to the property in Houston, with developers constantly on the prowl,” Palacios explained. She and her husband considered the Round Top expansion a lab experiment, and its success led to them opening additional concepts.

Since then, the newly established Palacios Murphy Restaurant Group has been busy. They opened an Italian-restaurant called Lulu’s in Round Top in 2018, followed by a Houston location in 2021. They also own the 14-room Hotel Lulu and nearby Popi Burger, which serves burgers, hot dogs and sandwiches, also in Round Top. Now they’re preparing to open a second Mandito’s location in early 2023 in the Houston suburb of Bellaire.

The new Mandito’s was designed in collaboration with New York-based architect Rocco DiLeo and will seat 165 guests between the dining room and temperature-controlled patio.

The menu will largely follow Mandito’s original location and include favorites like the “world Famous” burrito bowl, plus enchiladas, tacos and other Tex-Mex classics. Guests can also expect a few plant-based options, a creative kids’ menu, and a reimagined bar program, with a variety of original cocktails and margaritas. Many of the dishes will make use of the BE&SCO Press and Oven, which can make 900 tortillas per hour.

“We believe food is one of the most important ways to tell a story, and Tex-Mex has a lot to say,” Cinda Palacios said. “For over 50 years, the stories of Tex-Mex cuisine have been largely disregarded, much like the people who have made the food iconic, and we want to preserve those stories and tell them to the world. Bringing Mandito’s to Bellaire is one further step toward achieving that ambitious goal.”

Palacios Murphy’s COO Alex Curley, said the group is currently working on opening three more locations in the next year and a half, all in the Houston area, and he anticipates an accelerating growth rate that will eventually take them out of the region.

“We are blessed with the fact that our operations and executive teams have operated successfully within a broad range of markets, including but not limited to Washington D.C., Maryland, Virginia, Illinois, California, New York, Philadelphia, Colorado, North and South Carolina, Massachusetts, Connecticut, and Georgia, as well as international locations,” Curley said. “We can safely say that none of those markets are off the table for us.”