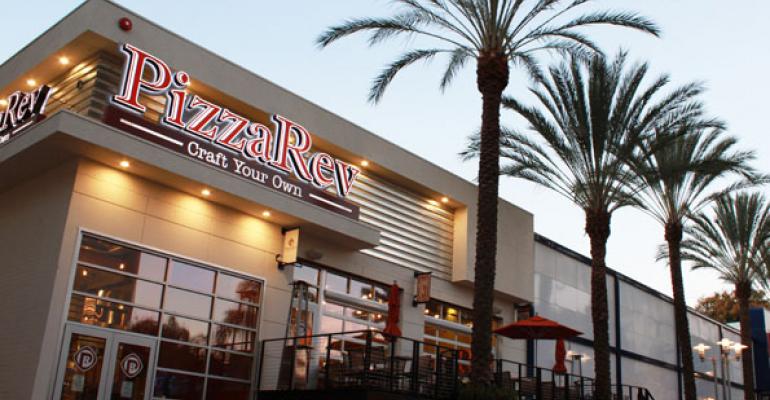 Full speed ahead for PizzaRev

Although a recent study from the U.S. Department of Agriculture showed how popular pizza is for dinner, it’s the lunch daypart that has Irv Zuckerman most excited about PizzaRev and the growing fast-casual pizza space.

“It’s a paradigm shift to lunch,” says Zuckerman, a longtime entertainment industry exec and now co-c.e.o. of PizzaRev, a Los Angeles-based customizable gourmet pizza concept. “Pizza in two to three minutes, high quality and at a good value? You’re taking an item that was never available for lunch, so people with just 20 minutes leaving work or shopping can now take advantage of it. Dinner will take care of itself, lunch growth will lead our way.”

Zuckerman isn’t alone in that line of thinking. More than a dozen competitors have pizza concepts with similar characteristics and their battles to become the Chipotle of pizza are well documented (check out our breakdown of the key players).

“It further validates the customizable pizza space,” says Zuckerman, who believes the key will be which concepts can differentiate themselves the most. PizzaRev offers a thinner Roman-style crust and numerous high-quality toppings, and it recently added a “Rev it Up” section that allows customers to add up to 20 more flavors through additional sauces and spices.

And Buffalo Wild Wings, a minority investor in the company, will become the first franchisee with a store soon opening in Minneapolis. The unit will not be considered corporate owned because the wing king wanted to be treated like any other franchisee and it’s an additional investment. “They viewed it as a positive to see what the other side is like,” Zuckerman says.

Pizza Rev will continue to grow in Southern California through corporate development, with another seven to 10 stores opening by year’s end. That should match the amount of franchised locations that debut in other markets. Zuckerman expects to have a total of 20 to 30 units open by 2015. Will that put Pizza Rev ahead of the game in the race to become market leader?

“It’s a marathon at a sprinter’s pace. We’re being careful, diligent and selecting the right markets,” says Zuckerman, who later added that all the pizza players could see continued growth: “A rising tide will lift all boats, but eventually there will be a dropoff for a variety of reasons.”