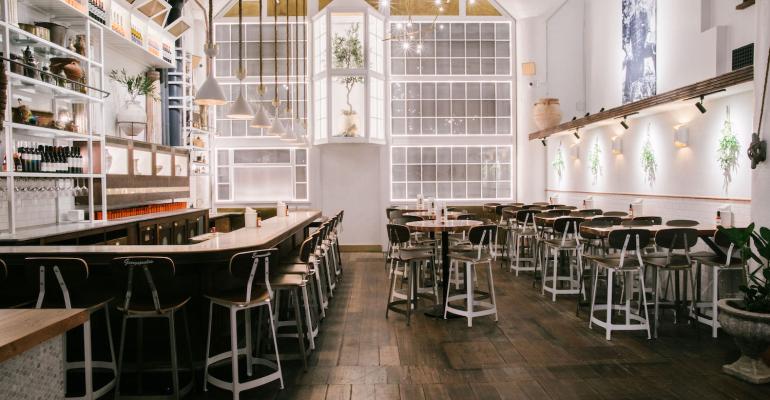 Jordan Wise
The newest location of Souvla will have a wine bar.
Trends>New Restaurant Concepts

The Dogpatch location to feature mezze and other shareable items

The fifth location of Souvla, the highly acclaimed fast-casual restaurant in San Francisco specializing in Greek-influenced sandwiches and salads, will have an expanded menu and a bar with a larger by-the-glass wine list, the company’s management said.

Slated to open Aug. 16 in the Dogpatch neighborhood, the new 70-seat location will offer counter and bar service and serve chef Tony Cervone’s shareable appetizers, or mezze, including a chilled octopus salad with shaved radishes, lemon and parsley, lamb meatballs with mushrooms and roasted tomato sauce, and dakos, a dish from Crete made of tomatoes and feta cheese over wheat rusks. Traditional mezze including saganaki, or broiled cheese, stuffed grape leaves and spanakopita, or spinach hand pies, will also be served along with spreads such as garlicky yogurt tzatziki, the fish roe dip taramasalata and roasted eggplant or melizanasalata. Prices range between $8 and $18. Additionally the fried dough dessert loukoumades will be available for $10. For the first time, Souvla’s whole feta=brined, spit-roasted chicken will be available for dine-in, rather than as an off-menu takeout item, for $33.

The chain’s regular gyro items will be available, too, of course.

“This is our first restaurant in three years and we’re taking the opportunity to not only evolve what a Souvla restaurant looks like, but also really double down on our Greek heritage and the traditional fine-dining backgrounds that many on our team members have,” founder and CEO Charles Bililies said in a press release announcing the opening. Bililies himself designed the restaurant, as he has with all other Souvla locations, making use of the space’s 19-foot ceilings.

Souvla, which opened its first location in 2014, has always had an all-Greek beverage selection, but the new restaurant will feature a wider variety of wines, including its own private-label bottles, and others ranging from crisp, minerally white wines from the island Santorini to full-bodied reds from the Nemea wine-growing region on the Peloponesus, plus ancient-style wines aged in large earthenware vases called amphorae.

The new restaurant will be around the corner from a new five-story Restoration Hardware and its Palm Court Restaurant as well as the 28-acre Pier 70 waterfront development.

This article has been updated to better reflect Souvla's menu as well as to correct the number of restaurants currently in operation.
TAGS: Food & Drink
0 comments
Hide comments
Recommended Reading