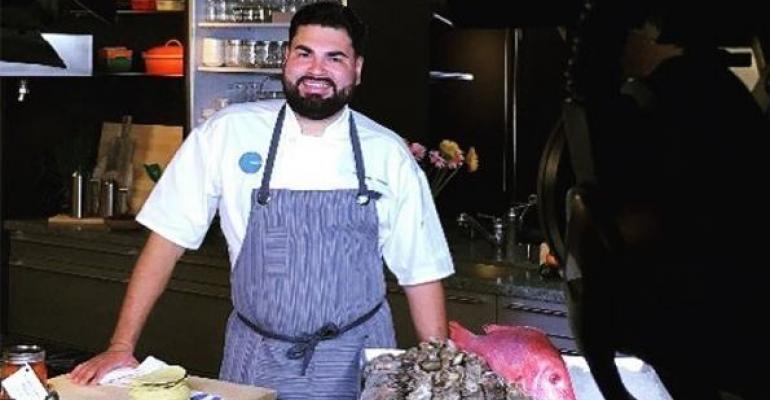 It has been 20 years since Emeril Lagasse has opened a restaurant in his adopted hometown of New Orleans, but the town’s famed chef is back with something all new and a more casual twist.

The new Meril, named for Lagasse’s daughter, was scheduled to open Sept. 24 in the city’s Warehouse District. It’s the 13th restaurant for the company, which also operates restaurants in Las Vegas, Orlando and Pennsylvania, and it’s the fourth concept for Lagasse in New Orleans, where Emeril’s New Orleans, NOLA Restaurant and Emeril’s Delmonico have long been mainstays.

In the kitchen at Meril as chef de cuisine is Will Avelar, who has worked with Lagasse since 2005, most recently as executive sous chef at Delmonico.

Here’s what Avelar says about the new eatery:

Can you describe what Meril will be?

It will be casual dining, but the service will still compare with and be just as good as any of the existing restaurants. We won’t have three servers at table at all times dropping food, like in the more formal manner you see at Emeril’s fine dining restaurants where everybody gets served at the same time.

Why go that route?

We’ve noticed that diners have changed the way they eat. A lot of people still like dressing up in a suit and tie, but mostly what we’ve seen over the past 10 years is people want to be a little more relaxed. They want to pop in for lunch or come in on the weekend and not feel like it’s an occasion.

Tell me about menu at Meril?

We’ll have fresh pastas, pizzas and we’ll also be highlighting a really cool robata grill, a Japanese-style grill that uses coal. We’ll be doing a lot of marinated meat, scallops, Korean-style short ribs served with traditional kimchi cucumbers. Some of the stuff out of Emeril’s latest cookbook will be on the menu as well, like sticky ribs.

Emeril just traveled to China for his latest show he’s doing through Amazon and brought a lot of good ideas back with him, like dumplings and different flavor combinations. He went to Korea as well, so Korea will definitely be among the notes we’ll hit at Meril.

People are going to talk about our baked oysters with a topping of bone marrow, and hog’s head meat boiled in Cajun flavors. It’s topped with caramelized onions and roasted garlic and we serve it with accouterments like salsa verde or some lemon or pickled green beans, and grilled baguettes.

Also, another signature dish will be fried turkey necks, marinated and boiled and marinated again with a Puerto Rican sofrito, then we drop them in a deep fryer and crisp them up, and toss them with a mojo sauce made with Crystal hot sauce.

So you’re going all over the place with this menu?

It tells you where New Orleans is in 2016. We’re not only sticking to your jambalayas and gumbos and étouffées. We know how to do all those dishes, but we want to tap into the rest of the world and show we’re very well rounded.

What are you thinking price-point wise?

Lower. Meril will have dishes in the $7 to $22 range. The size of dishes will be a bit smaller, so diners will have more choices, to be able to budget their dinner. You can find a salad at $7, for example, and we’ll have a snack section with items from  $6 to $12.