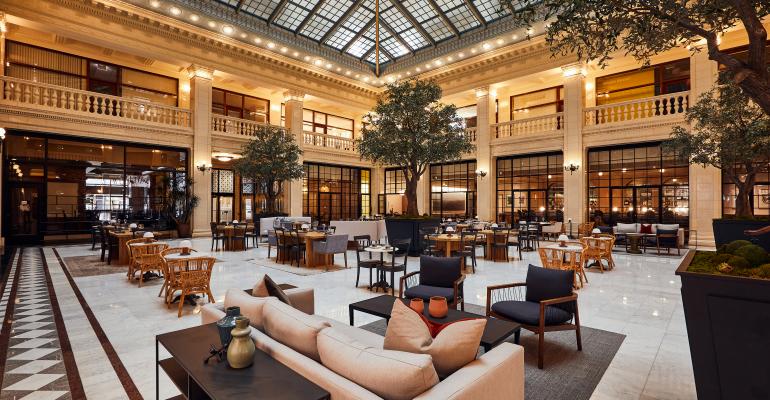 The event space for The Exchange, the Atrium is one of Chicago's most photographed rooms.
Trends>New Restaurant Concepts

With The Assembly food hall in D.C., The Exchange in Chicago and a new delivery startup, restaurateur David Morton’s Chicago-based company has never been busier

Restaurateur David Morton is probably one of few people in the industry who would say the pandemic has been really good for business.

The owner of Chicago-based multiconcept group DMK Restaurants and the son of famed restaurateur Arnie Morton, David Morton had long established himself as the operator of concepts such as DMK Burger Bar, Fish Bar, and more recently Marshall’s Landing in Chicago’s Merchandise Mart, now just called the Mart.

This year, however, has been one of the group’s busiest ever. DMK in July opened a unique new food hall in the Washington, D.C. area called The Assembly, with six in-house-developed fast-casual brands and two new full-service concepts.

In Chicago, DMK is in the process of launching a stunning multi-part space called The Exchange in a building where iconic architect Daniel Burnham once worked.

And yet to be revealed are exciting new plans for New York City with Vornado Realty Trust, one of the largest property owners in Manhattan, which also developed the Mart.

In addition, Morton is launching a startup delivery company called Jogg that’s environmentally friendly and much less costly for restaurant operators, at least compared with the bigger third-party marketplaces like DoorDash and Grubhub. 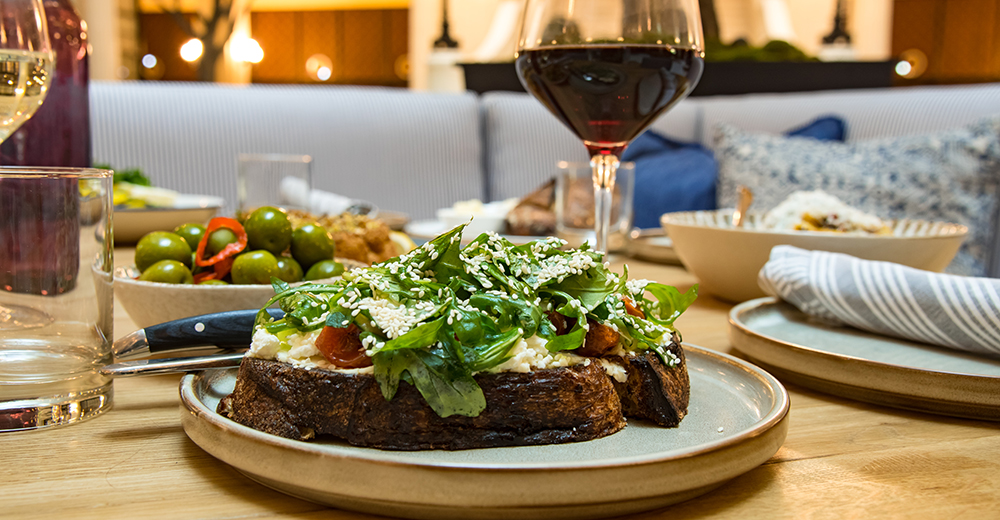 A running theme behind all this activity are the partnerships DMK has been building with real estate companies to create unique experiences in very large format spaces, said Morton.

Whether it’s filling nearly 30,000-square-feet with an assortment of bespoke dining options or figuring out a way to move food (and other retail products) from point A to point B in places where cars can’t really go, Morton says his phone keeps ringing.

“The pandemic has been incredibly friendly to DMK,” said Morton. “The company’s growing faster than it ever has. We’re delighted, and we also never worked harder.”

Here are the highlights of what’s new:

Morton calls this tech start up “the response to the double-edged sword of using third-party delivery.”

There are a few key differences to this delivery service, which is in place at the Mart in Chicago, the nation’s largest private commercial real estate development and home to hundreds of retail, restaurant and office tenants spanning 4.2 million square feet and 25 stories over two city blocks.

The idea is to take gas-guzzling vehicles — with their polluting emissions and costly insurance — out of the delivery equation. Instead, Jogg invests more in the employees themselves. The “hospitality agents,” as they are called, are employees of Jogg, not independent contractors. 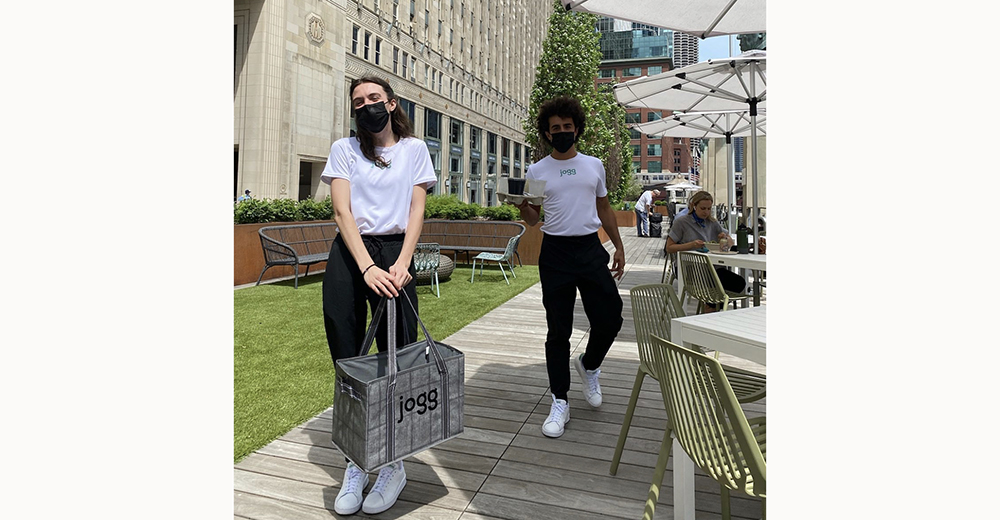 This delivery company uses human messengers to deliver on foot in places where cars can't go.

Those Jogg agents also use a specially designed vessel for carrying food and other products in a way that reduces packaging waste and avoids damage to the product being delivered, Morton said.

For restaurants, the delivery commission is 12.5%, which is significantly less than the 30% that is more typically charged by the larger third-party platforms.

Morton said the idea is to use Jogg in partnership with landlords to provide this hyper-local delivery service in other large-format venues, especially places where cars are a detriment, like airports, stadiums, college campuses and corporate office parks.

DMK’s newest food hall in Arlington, Va., is another location where Jogg’s services will likely be applied as the service expands to new markets.

The 29,000-square-foot venue in Rosslyn City Center over a busy metro stop is designed to create a variety of “third place” spaces for area residents to dine, drink and hang out. Unlike most food halls, guests can order from their phones and sit wherever they like, rather than standing in lines.

Often at food halls, people end up going to the venue with the shortest line, even if it’s not the food they really want, said Morton. “This democratizes the process,” he said. “It was a strategy to eliminate lines but without affecting the speed of service.” 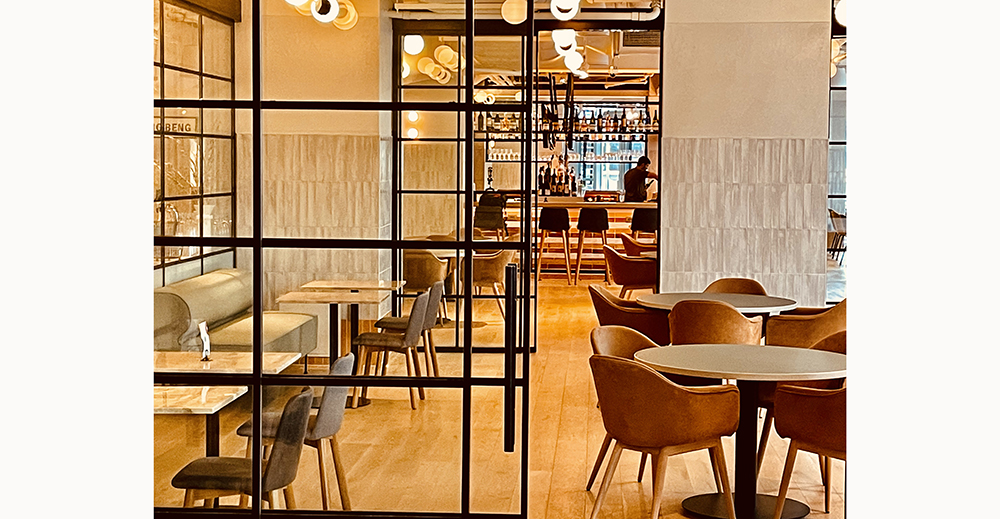 The Assembly in Washington, D.C. includes a collection of six fast-casual outlets and two full-service restaurants, as well as dining on a roof terrace.

All of the concepts were developed by DMK executive chef Brian Huston and chef Cameron Cousin specifically for The Assembly. Morton said there are no plans to multiply them in other markets.

“We thought that was a better way, versus a collection of companies side-by-side, which is kind of what’s common,” said Morton.

Among the concepts are the fast-casual outlets of Big Day Coffee, which offers beverages from multiple roasters, rather than devoting the menu to just one. Pastries are made in house daily, and guests are encouraged to come, plug in and work or socialize.

Full-service concepts include the seafood-focused Fog Point Oyster Bar. And The PNTRY is a gourmet prepared food bar and market for grab-and-go options.

Back home in Chicago, DMK this year opened The Exchange, which includes several parts that have opened in phases in a building that Morton calls an architectural gem. “In my humble opinion, it might be the finest work DMK has done to date,” he said.

First came The Listening Room, a restaurant loosely based on Japanese listening cafes. The restaurant is a vegetable-centric steakhouse, but it’s also a “pristine audio experience” where the music is one of the stars of the show, said Morton. “But that doesn’t mean you can’t talk. It’s busy, busy, busy.” 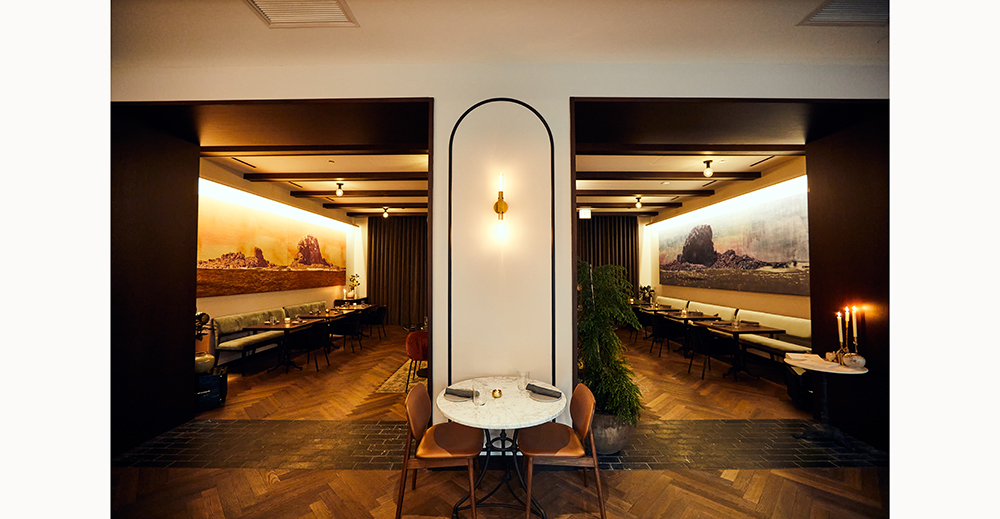 The Listening Room at The Exchange is inspired by Japanese listening cafes.

Also in the building is the Atrium, a glass-enclosed event space that will be open for a la carte dining when not in use. Scheduled to be fully open by the end of the year, Morton said the Atrium is “one of the most photographed rooms in Chicago.”

Then there’s a bar called Theo’s scheduled to open in late September with an “incredible art collection,” said Morton, though it’s also a fine spot for watching Bears or Cubs games.

DMK is evolving in other ways, Morton noted.

The company was founded in 2009 with chef and partner Michael Kornick — known for the restaurant MK and the Nine Steakhouse chain — who Morton describes as “like a brother.” But Kornick, who is about 10 years older than Morton, retired earlier this year. He moved to Colorado to hike and ski.

“He’s still a brother to me,” said Morton. “We had a 12-year honeymoon. It was the most productive, loving partnership professionally I’ve ever had the opportunity to be a part of.”

Meanwhile, Morton has reworked a restaurant he developed with his actual brother Michael Morton.

The two brothers joined forces for the first time to create MB Steak, which was housed in the Hard Rock Hotel in Las Vegas, a property founded by their half-brother Peter Morton. When the property was acquired and rebranded as a Virgin Hotel, the Morton brothers also reworked their restaurant there and renamed it One Steakhouse, which reopened this year.

One Steakhouse is a concept the two Mortons would like to grow in other markets. DMK is also opening two more DMK Burger Bars in Chicago over the next 12 months.

And there will be more news from New York City, where David Morton said DMK will expand on its work with Vornado. But the company is not ready to reveal their plans there — though David Morton said it will be yet another very large format, hospitality-driven project scheduled to open in the first quarter next year.

“There’s just been endless demand for DMK to come work with institutional real estate partners … to inject hospitality into the commercial real estate space,” he said.