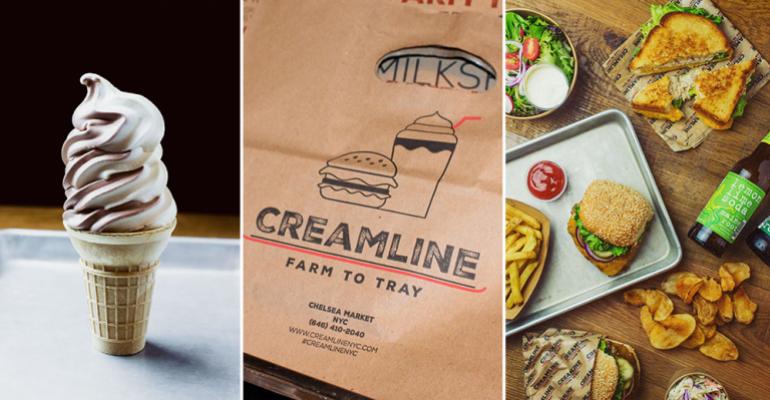 Creamline is one of the newer concepts in New York City’s Chelsea Market food destination, having opened last year, but it has close ties to the original inhabitant of its space, Ronnybrook Farm Dairy.

“We are partnered with Ronnybrook in the fullest meaning of the word,” said Harris Mayer-Selinger, chef and owner of Creamline. “They are a business partner and our most important supplier.”

The dairy producer, based in Ancramdale, N.Y., provides the milk, ice cream, butter and other ingredients used in Creamline’s milk shakes, burgers, pancakes and other classic American menu items. It’s also one of approximately 10 investors in Creamline.

“The name is a big part of telling the story,” Mayer-Selinger said. “Creamline is the name of Ronnybrook’s signature milk.”

Using local, high-quality suppliers, or “farm-to-tray,” as Creamline’s motto states, is at the core of the concept. In addition to Ronnybrook, the restaurant taps Chelsea Market neighbor Dickson’s Farmstand Meats to supply the beef for its burgers. The meat is pasture-raised, dry-aged and has a very beefy flavor, according to Mayer-Selinger.

So far, business has been strong and the young concept is already expanding. A second location has opened in New York City, and others are in the works.

“We’re really proud that we can maybe change the standards that people have for fast food,” Mayer-Selinger said.