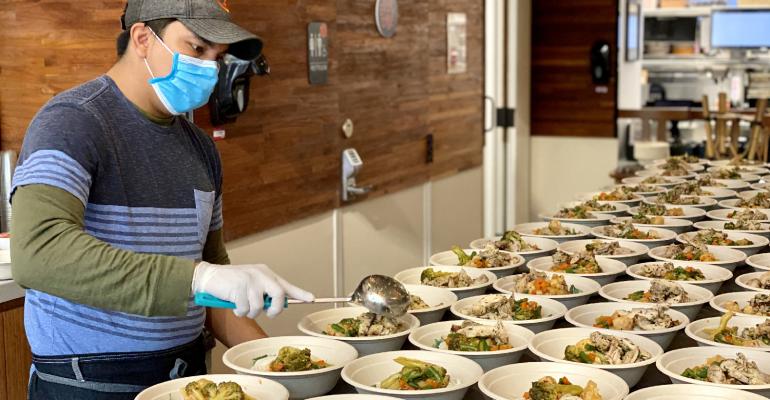 As the coronavirus pandemic forced the closure of dining rooms in early March, many restaurants responded by immediately volunteering to serve as community kitchens to feed frontline workers in hospitals, first responders and those in need in their communities.

It wasn’t just a feel-good effort. It became a way for operators to try to save their businesses and keep workers on the payroll.

World Central Kitchen’s Chefs for America initiative, for example, became a model. Offering a revenue source to restaurants willing to prepare meals for those in need, the program gave restaurant partners like Alma Cocina Latina in Baltimore and Immigrant Food in Washington, D.C., the extra boost they needed to survive the difficult first few months of the pandemic-related shut down.

As the fallout from the pandemic deepens, these charitable programs are evolving into a longer-term aspect of the business. 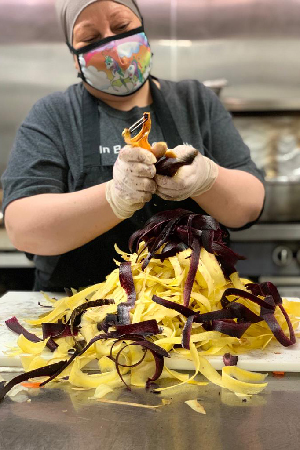 Alma Cocina Latina owner Irena Stein is using the World Central Kitchen model to open up her own community kitchen in Baltimore, an idea that she calls “social gastronomy.”

“I think the future of the world and our country will never be the same or not anytime soon,” Stein said. “The problems we have now are acute and the pandemic has accented them. We committed to making a kitchen with purpose, to really be part of the Baltimore community.”

Alma Cocina Latina — a Venezuelan restaurant that opened five years ago — closed temporarily at the start of the pandemic and initially began working with Mera Kitchen Collective, a food co-operative that helps refugee chefs.

In April, Alma Cocina Latina began a partnership with World Central Kitchen — a nonprofit founded by chef José Andrés with a long history of helping to feed people in the wake of disasters. Through the partnership, the restaurant received $10 per meal to prepare food for people in need and seniors.

Between both partnerships, the restaurant was able to employ most of their staff, keep up with rent and utilities, and produce about 3,000 meals per week for the community, she said.

Stein said she was inspired by her charity partnerships over the past few months and now wants to move forward with creating a community kitchen of her own, in partnership with the MK Foundation, part of the Mera Kitchen Collective.

They’re currently courting community groups and the local city government for partnerships and they are looking for a space to move into to start Alma Cocina Latina’s as-of-yet-unnamed charitable arm. Stein plans to create a menu of meals with sliding-scale pricing so that some meals may be paid for and others may be donated to those in need. The key to keeping costs down is to create strong relationships with supplier and purveyors, she said.

“Our strategy is to market this idea of social gastronomy and do all our marketing to alert the city of Baltimore to contribute to us,” Stein said. “They want to support their community, well, that’s nice — put your money where your mouth is. […] This is not going to be easy to sustain. We will just have to keep on adjusting and analyzing and look at the thin profit margins and try again.” 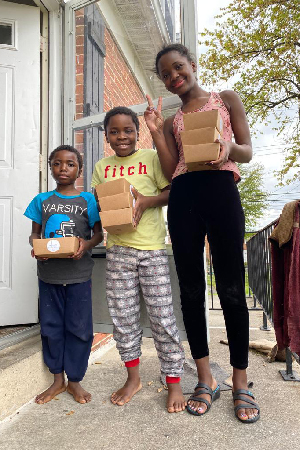 Before the pandemic began, another World Central Kitchen restaurant partner, Immigrant Food — a “gastro-advocacy” concept down the street from the White House in Washington, D.C. — was already a community-minded outlet. It’s a restaurant, but guests also can also peruse an “engagement menu” that allows them to donate to various immigrant organizations or participate in activities. The concept also loans space to local non-governmental organizations for things like volunteer training and citizenship classes.

When the pandemic hit in March, Immigrant Food closed for two weeks. They reopened to partner with World Central Kitchen to donate 250 meals a week to local nonprofit, Martha’s Table.

As a result, the restaurant was able to rehire nine of 13 employees. They also launched their Plate It Forward initiative, a partnership with refugee and immigrant chef organization Tables Without Borders.

Immigrant Food’s chef and co-founder Enrique Limardo — who also helped create Alma Cocina Latina’s menu, pre-pandemic — created an Iranian-inspired lunch bowl in honor of Tables Without Borders chef Taraneh Salehi, who is Iranian. Customers can choose to donate one, five, or 20 bowls to three of their partners: healthcare workers at a D.C.-area hospital, or the immigrant community through the advocacy organizations Ayuda or CAIR Coalition.

“I think [these partnerships] have grounded us even more,” said Tea Ivanovic, director of communications and outreach at Immigrant Food.  “We’re even more convinced of how important social activism is, and we’ve all seen that with Black Lives Matter and protests, how important it is for us to engage on social issues and move community forward.”

But a large part of their strategy of being able to give back while also staying afloat themselves is to be creative and flexible.

Ivanovic said that they have found relief by selling tickets to virtual programming, like an online wine tasting events and a speaker series. Around six weeks ago, Immigrant Food also began hosting dinners, helmed by a different chef every week, serving different cuisines like Venezuelan arepas and Mexican tacos.

Moving forward, Ivanovic said that they would continue to work with nonprofit organizations to become even more entrenched in the surrounding community, even after the partnership with World Central Kitchen ends. 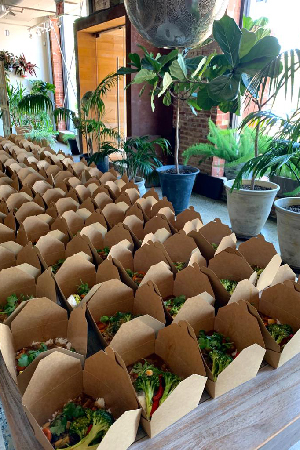 While many of the COVID-era restaurant community and charity partnerships do have an end point, restaurants are continuing with nonprofit efforts even as their restaurants reopen their doors.

Ani Ramen — which opened its two community kitchens earlier during the pandemic, Rock City Pizza Co. and Bang Bang Chicken, — will keep its pop-up nonprofit restaurants open for another two to three months, according to founder and CEO Luck Sarabhayavanija. The company has the goal of reopening Ani Ramen locations when they’ve hit about 40,000 meals donated and they are able to reopen their dining rooms at 50% capacity or more.

Until then, it does not make financial sense to reopen their for-profit restaurants, he said.

“Our model for this doesn’t work in the long run because we’re discounting our food,” Sarabhayavanija said. “If we increased prices across the board, we’d be more sustainable but breaking even is better than not operating at all [under current restrictions]. For us, we look at it as operating a nonprofit, so this is us volunteering our time and allowing 30% of our staff to have their jobs back. We’re paying our rent and utilities so that when we do decide to reopen Ani Ramen, we’ll have a clean slate. We’re losing money, but not losing as much money as if we’d remained closed completely.”

When Ani Ramen reopens, Rock City Pizza Co. and Bang Bang Chicken will likely become for-profit ventures. Luck said that they will also always have a donate-a-pie or -chicken feature in the restaurants and plans to open his own permanent nonprofit organization one day to run alongside the expanding Ani Ramen concept.

“The more we give back in our towns the more support we get back,” he said.