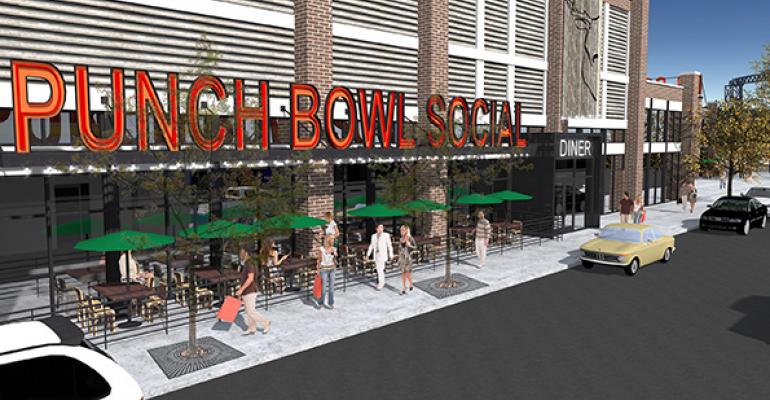 <p>A rendering of the Punch Bowl Social expected to open in The Flats neighborhood of downtown Cleveland in June.</p>
Trends>New Restaurant Concepts

Have you ever heard of that hot place downtown, the Punch Bowl Social? If you haven’t, you soon will.

Punch Bowl Social is an absolute home run concept. Here’s the gist: No longer does a night out require a driver or multiple cabs to get from drinks to dinner to entertainment to afterparty. Punch Bowl Social provides all of that under one roof. Come for the drinks, stick around for dinner (100-percent scratch kitchen gastropub), and then … I don’t know … bowl a few frames, challenge your buddy to ping-pong, team up for shuffleboard, hit up skee ball with your wife, reminisce with some vintage video games, take a stroll along the rooftop, whatever suits your fancy.

Yes, Punch Bowl Social offers all of that. It’s a project launched just two years ago by Denver-based Robert Thompson, who already has raised enough investment capital to open locations in Denver, Austin, Portland and Detroit. The Denver location is doing so well that Thompson is contemplating a second one there. On top of that, he has pretty aggressive plans to open Punch Bowl Social properties in Chicago, Los Angeles, Seattle, Indianapolis, Pittsburgh, Dallas and Cleveland—all within the next three years.

Ironically, the next location is scheduled to open in June in Cleveland, located a hop-skip-and-jump away from the Restaurant Hospitality editorial office. Punch Bowl Social Cleveland will anchor a phase of redevelopment of The Flats, a part of town that fell hard from its grace in the 1980s and is just now mounting a comeback. So, if it means trekking down to The Flats for a beer and a hardhat tour, we plan on keeping tabs on the project.

Not only because it’s in Cleveland, but because we’re sold on Thompson’s idea of an “eatertainment” destination. Admittedly, our immediate thought was that the entertainment would trump the food and we’re back at Dave & Busters. But Thompson promises the food and beverage will be 90% of his team’s focus, with the entertainment simply falling into place.

The PBS menu changes 15-20 percent from one location to the next. That’s because Thompson wants to welcome a community atmosphere by bringing in local dishes. He’s set on using a local organic ketchup at each restaurant and a local hormone-free beef product.

How did Thompson and PBS land in Cleveland?

“I spend a lot of time in the market just analyzing traffic patterns, talking to people, understanding the history and seeing where things are,” he says. “My cab rides pushed me over the edge in Cleveland. I asked the driver: ‘Can you and I drive all around Cleveland?’ We went to every entertainment district and I spent two hours in a taxi with a driver who had seen every area of Cleveland over the past 50 years. What I found was that every district, every pocket of downtown, was busy, and that made me feel very confident in the location.”

Let’s hope the cab drivers in other major cities are just as accommodating. If so, we’re confident you’ll be seeing Punch Bowl Social buildings sprouting up like weeds.