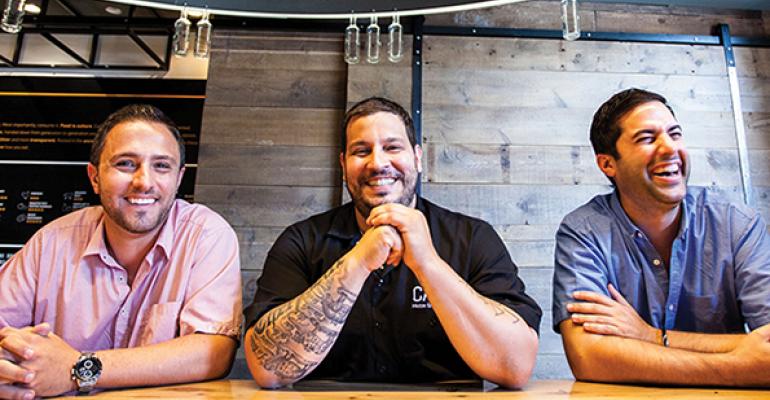 Fine dining hasn’t totally vanished from the U.S. restaurant landscape, but formal restaurants have definitely taken a back seat to more relaxed concepts. Chefs aren’t blind to where the growth is. They understand that to remain relevant they need to broaden their horizons beyond their white tablecloth worlds.

Celebrity chefs like Tom Colicchio, Rick Bayless, Michael Symon and Bobby Flay have already cracked the casual code; others are following in their wake. Consider:

• Food truck pioneer Roy Choi, who launched the sophisticated Commissary and Pot concepts in L.A. last year, is teaming up with another heavy hitter, Daniel Patterson, of San Francisco’s Coi, to launch a quick-service concept called Loco’l, promising wholesome and affordable fare. They hope to open the first two units in San Francisco and in L.A. this year. “The vision is to create a fast food concept that’s delicious, but do it with the heart of a chef,” Choi told Eater.com.

• Kent Rathbun, the Dallas-based chef known for his upscale Abacus and more relaxed Jasper’s, has a burgers-and-barbecue concept in the works. Hickory, planned for a mixed-use complex in suburban Plano, will have 150-160 seats with a fireplace and a patio. Rathbun envision it as a fun, relaxed spot that will work in a variety of locations, both in the Dallas-Fort Worth market and beyond.

• Bradley Ogden and son Bryan Ogden cemented their reputations in the fine dining arena (Bradley Ogden in Las Vegas, Lark Creek Inn in Northern California, etc.), but they are banking on the popularity of locally sourced roasted and fried chicken with their latest concept, Funky Chicken, which debuted in Houston just over a year ago. They view the concept as a growth vehicle.

• In L.A., Karen and Quinn Hatfield recently shuttered their critically acclaimed upscale Hatfield’s, where the focus was on minimalist haute cuisine. The couple are turning their attention to The Sycamore Kitchen, their bakery and café, and a few doors away they just opened a casual churrasco and grill concept called Odys + Penelope.

• Takashi Yagihashi closed his eponymous Michelin-starred restaurant in Chicago at the end of 2014. Doing so will give him more time to focus on his two casual Slurping Turtle noodle bar locations, as well as a noodles concept at the Chicago Macy’s, catering and private dining businesses.

Chefs venturing into casual territory get there via a variety of paths, as the concepts on the next three pages demonstrate.

Rachel Yang and husband/partner Seif Chirchi have come a long way from their time at Alain Ducasse at NYC’s Essex House hotel. Eight years ago they pulled up stakes, headed west to Seattle and opened Joule, a Korean-French eatery, followed in 2010 by the more relaxed Revel, where Korean-influenced small plates rule.

Last fall, Yang and Chirchi launched something altogether different from either of their existing concepts: Trove, a sprawling 100-seat space that encompasses a Korean barbecue; noodle bar; an integrated food truck that dishes up parfaits; and a cocktail lounge.

In the works for years, Trove started out as a Korean barbecue and morphed into something else, for two main reasons: Retrofitting tables with grills turned out to be a wildly expensive (each table needed its own hood), and the couple wanted to eliminate the veto vote from groups hesitant to try Korean barbecue. They knew noodles had broad appeal.Together with the bar and ice cream, the 4,000-foot space with its four distinct areas is designed to satisfy a number of appetites: a quick lunch, a fun dinner, drinks and dessert.

Yang likes the casual dining space because, she says, guests have fewer preconceived notions about it. “Fine dining has a price tag on it, and people have a different expectation,” she says. “It’s harder to please people. There are certain things that they want you to be.

“With the lower price tag and a casual atmosphere, people come in to enjoy themselves more,” she adds. “We wanted to create an environment where people are having fun, not being shushed.”

The price difference is significant. Checks at Joule average $45, while “you can get out feeling very full for $15-$20” at Trove, Yang says.

That low price point means guests can afford to be regulars, something Yang and Chirchi intended. The barbecue might attract groups and families looking for a novel way to spend the evening, but noodles and ice cream are more familiar comfort foods. “When creating the menu we made sure to give people something they crave every day,” Yang says.

It’s not too surprising, given their backgrounds, that the chefs do not stint on quality at Trove, despite the lower price points. “It’s a misconception that upscale restaurants use more high-quality ingredients,” Yang says. “In some cases that is true, but we use the same quality at all three of our concepts. The bigger impact on the bottom line, she says, comes from staffing levels, which at Joule are much higher. Given Trove’s much lower check averages, she says, “in the end, we are really relying on volume.”

So far, reactions to the multiplex approach have been positive. “It’s a little like Joule, a little like Revel, and a whole lot of fun,” a Seattle Times reviewer wrote.

It’s a good bet that most people, even food people, have no idea what a temakeria does. But Uma Temakeria cofounder Chris Jaeckle is betting on pent-up demand for his concept, inspired by a trend in Brazil toward simple, affordable high-quality Japanese fare in a casual atmosphere.

Jaeckle’s path to Uma wasn’t linear: After winning a Michelin star at NYC’s Ai Fiori, he signed on at the legendary Morimoto so he could explore Asian cuisine. “I was progressing and started to feel I was ready to be a chef, but I wanted to try something Chinese or Japanese and play with those flavors before I took the next step,” Jaeckle says. “At Morimoto, it turned out I became quite passionate about it.” He spent three years making sushi rice each night as well as the family meal for the staff, which consisted of simpler versions of the day’s more complicated dishes.

Ultimately a mutual acquaintance introduced him to Cynthia Kuepper, an entrepreneur and investment banker who discovered temakerias during a trip to Brazil. Both she and Jaeckle saw the gap in the market for convenient, affordable sushi, and thus was born Uma, a fast-casual concept with growth in mind.

The specialty of the house is temaki, or cone-shaped hand-roll sushi, made to order with ethically sourced ingredients. Jaeckle created the recipes and trained the staff, juggling those duties with his day job as executive chef and partner at All’onda, a tony Italian restaurant. At Uma, he prefers the title cofounder to chef, he says, because “I don’t want people to expect to see me behind the counter.”

It wasn’t easy sourcing high-quality sustainable seafood at that price point. “Finding a tuna at a quality level I deem high enough for sushi I’m selling for $6, I must have tried 20 different tunas. It was the same with the crab. It was really about networking and using my contacts in the industry,” Jaeckle says.

He and Kuepper have raised capital to expand the concept to more locations, but Jaeckle says it’s too early to talk specifics. “It’s going to be a New York thing for the next few years,” he told Grubstreet.com. “But I’d love to see this in every city in America.” 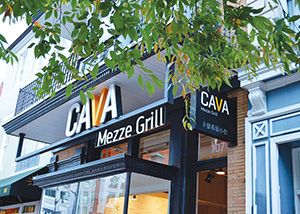 The three partners at Cava Mezze, a group of three Washington DC-based Mediterranean restaurants, hit on the idea of a fast-casual spinoff around the time the third location opened. It was a way, partner Ted Xenohristos explains, for the group to reach a broader audience.

“It’s not that Cava Mezze was an expensive restaurant, but it was a little pricier than fast casual,” he says. “For us it was important to connect with people who were time-conscious, health-conscious and budget-conscious.”

The end result was Cava Grill, which launched in 2011 and has expanded to eight locations in the DC metro area. The partners also are eyeing expansion in Southern California.

Cava Grill riffs off the menu at Cava Mezze, developed by chef/cofounder Dimitri Moshovitis and adapted to tighter facilities with lower price points. (Checks average $30-$40 at Mezze, $8-$10 at Grill.) Some of the savings comes from value engineering the menu with smaller portions, “working with purveyors and smart shopping,” Moshovitis says. Cava Grills use sous vide to provide quicker turnaround times and less onsite labor. With smaller kitchens, some of them designed as display kitchens, staff can turn out the menu with quick grilling, frying and other techniques. All the units are adding stone-fired ovens as well.

Local partnerships are integral to Cava Grills. They have worked with a local dough company to create a fresh pita that can be baked off in house; the beer selections include local brews; pickles and teas come from nearby suppliers.
Cost of construction is another key lure. “Fast casual is much easier to expand,” says Xenohristos. “When you’re talking about full-service you need so many components, a general manager, a sommelier, so many servers.” About half the business at the Cava Grill locations has been takeout, so the dining room can be smaller. Combined with a less-complicated kitchen, that brings the cost down by about half. New units range around 2,000-2,500 square feet with 50-75 seats.

Those economics are driving Cava Grill’s expansion at a healthy clip, with three new units opening last spring and three more planned for this year, including one at Reagan National Airport in DC. A fourth Cava Mezze is in the works as well, in Baltimore.

Cava Grill management is also eyeing expansion to other markets, including Southern California. It probably doesn’t hurt that Whole Foods stores in some regions already carry a line of Cava Foods dips, so the brand won’t be a complete novelty in new markets.

If branching out pays off, Xenohristos adds, expect to see more Cava Grills popping up elsewhere. “Right now we need to concentrate on building the team. We don’t want to mess up the quality and consistency.”