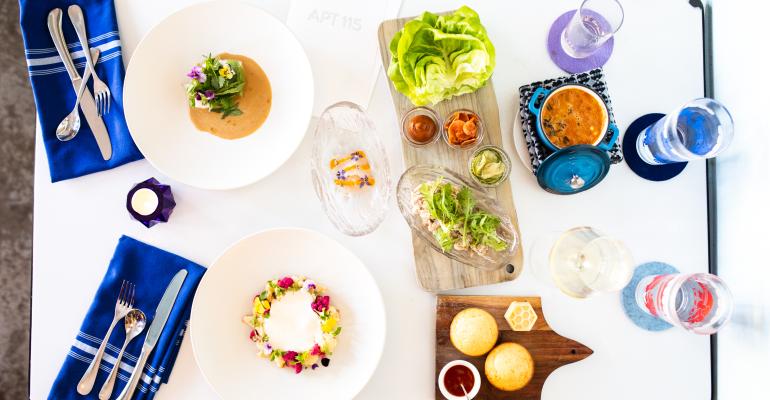 Charles Zhuo whips up a nightly feast with no staff, or even a real kitchen, at APT 115 in Austin, Texas

The chef says the limitations have made him a better cook

"Based on the lack of staffing, equipment, and space limitations, I have found myself maturing as a chef," said Zhuo in a phone interview. "It's a neat bag of tricks that I use to try and hide the fact that it's just one person in the kitchen."

Zhuo didn't start out with so little. In fact, the classically trained chef's career includes a stint in Washington, D.C., as a sous chef at the two-Michelin starred restaurant Minibar by José Andrés. It also includes holding the titles of research & development chef, and then head chef, at Kemuri Tatsu-Ya in Austin and, most recently, executive sous chef at Barley Swine, also in Austin. So he’s used to having a team of prep cooks at his side, not to mention actual ovens and stovetops.

But at the 22-seat APT 115, it's just Zhuo in an apartment-sized kitchen doing all the work. Each week he serves tasting menus to 40-50 customers, along with some à la carte items for customers looking to just sample wine and nibble at the bar. Now, a year into the business, he said he still loves it.

Having complete control of the menu and execution has helped him grow as a chef, he said, as well as learn a lot about local and seasonal foods, and how to bring his own upbringing in China to the plate in a way that combines techniques from all over the world.

"Coming here was an exciting opportunity and I basically have carte-blanche to do what I want and evolve my own style," said the 34-year-old, who took a year off work during the pandemic and focused on what he really wanted to do, which, it turns out, is still cooking.

"I get to challenge myself and push myself harder in terms of what is possible with just one person in the kitchen," he said

Zhuo blends Texas Hill Country ingredients with flavors pulled from his own childhood. Each tasting menu runs $125 a person, plus an optional $50 wine pairing, and includes around 10 to 12 courses, or, as he put it, varying-sized plates running one-to-three bites each.

The meal may start out with a "celebration" of local produce, which the chef plays with so that a bite-sized butterfly-shaped leaf tastes like buttered corn. Diners might also get a strip of carrot jerky or cured salmon topped with lemon drop and guajillo chilies.

Larger dishes tend to lean on Chinese spices and cooking techniques — for example a soup duck course that includes a soup dumpling filled with rich duck broth, a steamed duck egg custard with truffles, and a lettuce wrap made with duck leg confit and crispy duck skin. Currently, because it's the season of the Chinese mid-autumn festival, Zhuo has added a tofu dish infused with chrysanthemum flowers and served with smoked trout roe and an apple-chrysanthemum broth.

"I choose apples because they just became available locally, and I still like to listen to what's happening with farms and ranches around here," he said, adding that he enjoys being able to put things on the menu because he wants to, not necessarily because it's a big selling item. "I feel lucky enough to say we are attracting enough people who appreciate what I am doing, and I don't always have to have beef on the menu to attract guests."

Aside from the tasting menu, Zhuo also has a small, ever-changing à la carte selection with mainly vegetarian fare, such as lion's mane mushroom ssam ($24), potato with smoked cheddar and green chiles ($15), and a tasting of Spanish ham ($30).

While freedom in the kitchen proves enjoyable for Zhuo, it's not easy. The chef averages 70 to 80 hours a week in the kitchen, and even though APT 115 is closed two days a week, he uses one if not both of those days to prep food and plan his menu. He also has limited refrigerator space, which partly dictates how he shops.

Because he wants ingredients, especially produce, to be as local as possible, fermentation has become a big part of the program and many dishes showcase pickles, dried chiles and herb-infused oils. And, while many Asian ingredients aren't synonymous with Texas agriculture, the chef said he was excited by what he could find locally.

"Right now I can get locally sourced jujubes, which is ubiquitous with soups in China but no one uses it here," he said. In fact, while native to Asia, the jujube plant, a type of red date, has been cultivated in Texas since the late 1800s.

"Overall I have found there's a market for this sort of tasting menu, even if it's serving up things with ingredients that aren't well known in Austin," he said, adding that he has a lot of support from APT 115's owner, Joseph Pannenbacker. "I don't want to have to do what is just going to sell or worry about if it's a big seller. If I want to put organ meat on the menu, I will do it," he said.

Despite all the work, Zhuo finds the minimalist kitchen a great place to be as he continues to grow as a chef and create intricate tasting menus.