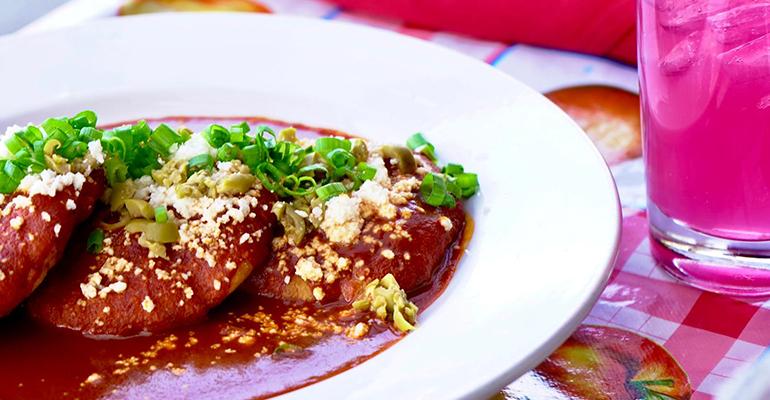 Flores Concepts
Carlotta Flores, 75, is planning the next stage for the family restaurants: Making sure her children and grandchildren are set up to keep it a success.
Trends>New Restaurant Concepts

Carlotta Flores of El Charro Café in Tucson, Ariz., possible birthplace of the chimichanga, prepares for the next generation

In 1922 Monica Flin opened her one-room Mexican restaurant, El Charro Café, in Tucson, Ariz., which among other things, is credited by some as the inventor of the chimichanga. A hundred years later the eatery remains a community fixture and is still run by Flin's family, namely her niece Carlotta Flores, who took the reins of it 50 years ago.

Since then the brand has grown into Flores Concepts, which includes four units of El Charro Café, a vegan concept called Charro Vida and Barrio Charro, which she owns with Don Guerra of Barrio Bread and which specializes in tortas and all-day brunch.

Flores, 75, is planning the next stage for the family restaurants: Making sure her children and grandchildren are set up to keep it a success.

Restaurant Hospitality caught up with Flores to discuss how she has maintained such a strong and consistent brand, what it's like expanding and how her aunt created a winning restaurant in the first place. 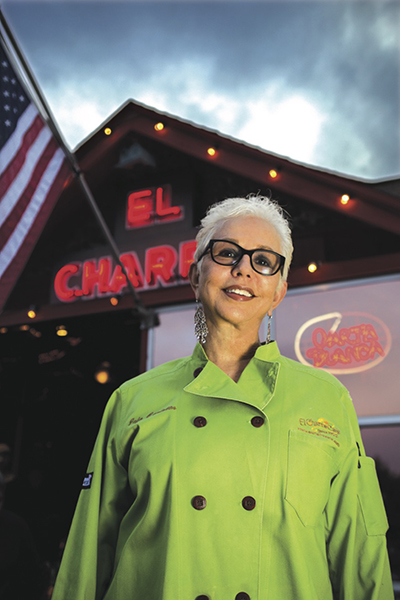 How did El Charro come to be?

When my aunt founded the restaurant in 1922 she had a streak of bad luck. She opened it with borrowed money and would go to the Chinese grocery, get the groceries on credit, make the food, and then go back and pay the grocer. She lived on-premise and we were raised with her like [she was our] grandma. We would stay there and we would dress up in her nightgowns and big slippers.

We're famous for creating the chimichanga, a traditional beef [burrito] … that's fried. In its original form, my aunt stayed true to the Arizona desert and Sonoran-style, or Tucson-style Mexican food. We did a lot of cooking in her kitchen. She didn't drive, but she had a brother that would drive her out, and when he picked her up she came out in a full regalia of a black hunting outfit. She would come back with venison, or quail or rabbit. That's where we learned to eat different types of food.

How did you learn the business?

I grew up in the restaurant business, it was part of my life. I went to school and had a small catering company in [Los Angeles]. When we came back to Tucson, the restaurant was going to be sold, I didn't want it to sell so I said, "Let’s stay here."

The employees had as much love for it as I did. I became a sous chef to my chefs and it just fell into place. Here we are 50 years later.

How did you change the business when you took over 50 years ago?

When I took over my father had a heart attack shortly after and passed away. I immediately went to change some things. In some recipes, I made proteins in smaller portions, and tried to take on the fact that restaurants shouldn't be filling people so full. I made my recipes work so that if it was good, it was good for your health. I started entering yogurt into sauces and changed to different oils. I incorporated different vegetables.

It really impacted my own thinking. Three years ago I ended up opening a restaurant called Charro Vida. It's a plant-based Mexican restaurant. It's doing wonderful.

How have you kept El Charro Café and the subsequent businesses going strong for the past 50 years?

There are two women that have been at the helm of the restaurant, myself and my tia [aunt], Monica Flin. Women are determined to see things through. My first 25 years it was run by me, the second half it's all been about keeping the legacy of El Charro alive with the interpretation from my family.

I feel like my family has always understood the fact that we are a restaurant and part of a community. The community has been very supportive, and the restaurant means just as much to them as it does to us. Each of my children have other things they have done, but they always come back here. It's nice to work with your family and younger people. They understand where all this comes from and where they are, and they pass that down to the community and that legacy to their families and the families that work here.

We have people in our kitchens that are the second and third generations of people that have worked with us. We have a feeling of family camaraderie and trust, and a general interest in doing a good job. I think that sums it up. 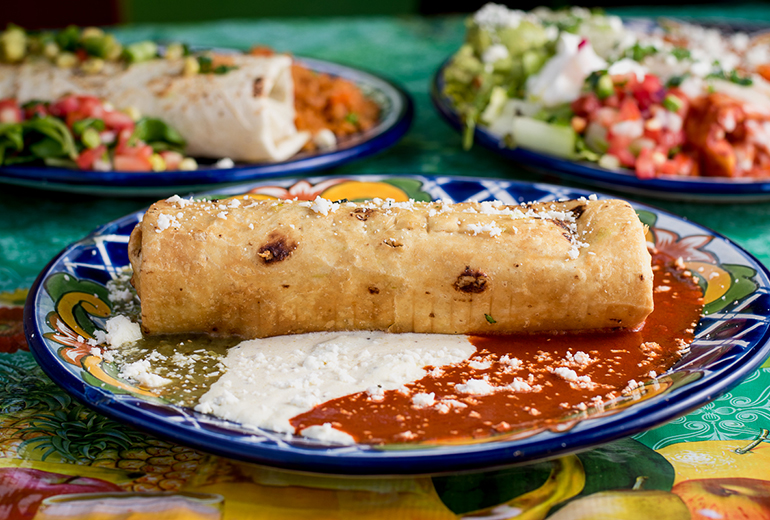 With hundreds of employees working for Flores Concepts, how many members of your family work for the company?

In my immediate family there are 13, including my sister's family and their families. Then about 35 people who are other members of the family.

Of course, when you have employees working for you for 25 to 30 years, and even got married during this time, they had their families, then their families become part of this whole big picture, too. One of the things I am most proud of is when I see the second generations go through higher education.

I have just countless people that have gone through our doors when they have been in school, and then they come back to see us with their own families. Most of them always have a special place here and they talk about their time in the restaurants.

Do your children and grandchildren help keep the restaurant modern and/or more current?

One hundred percent. They all have special things they do and they all have their own creativity and ideas. To have a restaurant now, it's not as easy as what I thought was difficult 25 years ago. The technology alone, it's superseded everything we do. As far as new designs and new ideas, those are pretty much done by my oldest son, Raymond. I don't think he sleeps, he is trying to carry on the family legacy.

My son Marcus runs the oldest store downtown, which is nostalgic. There it's about knowing the customer and being able to remember. Yesterday we had someone call to tell us that one of the family members, who had been my customer, and her grandchildren worked for our restaurant, had passed away and their celebration of life included food from El Charro. They specifically asked for our son that does that older location to handle it.

My daughter is in charge of events and catering. She is working with the people that come to see and talk to her, making sure that their event and menu is personal for them.

Why do you think so many people remain loyal to your restaurants?

In every city, when you travel, you go to a restaurant to know about the people and learn about the people through their cuisine. Tucson, being a city of gastronomy, it really has that backbone with people of all races and nationalities, working, I would say, through the love of food, community and family life. It has been very important here.

We also have the University of Arizona here, and many families come through here to go to school and work at the local businesses. During that time, they create their own feelings of love and unity. And, there is no better way to welcome people than with food. Now, I think [El Charro] is something that's in each of them.

What is your current role with the restaurants?

Well, right now, I scheduled to speak to you. This afternoon I will be part of some Zoom calls. I do recipes and I am involved in each restaurant kitchen. I have a cocina granda [commissary]. I do all the recipes there, and sauces, and most of the proteins. I oversee that, and I still am a part of everything that goes on.

With so many restaurants and different concepts, how do you keep them consistent?

I have always had someone by my side. We do a lot of training, our kitchens are constantly being scrutinized and discussed. I have people that are experienced in our line, or the line they are in charge of. They take care of it as if it's their own, and in a way it is.

And, when it comes to food, it's not just calling up a restaurant and asking if everything is okay. Through technology, if I have new dish, I ask them to send me a picture of it and look at all three or four of the places and make sure they look that way. Also my own family will go out and check restaurants.

Normally everything is tested and tasted at the store. It's interesting, I will have customers write or call me up and say, 'that was really salty.' I will stop right there and go to the source, and sometimes it's human error. If it's not at all the restaurants, then I can suss out that it was happening in just the one.

And, [consistency comes] with the help of my cocina granda. If the beans are salty there, they will be salty at a catering event, let's say. Consistency of the product is truly important. I make all the sauces at the cocina granda. The restaurants do the proteins, veggies, guacamole and salsas.

I think basically everyone has the same kind of problems and we can all lament about labor. Last year I made the investment through a local culinary program at one of our colleges, and putting young people through who want to commit to the industry and move forward in that direction, but with technology. I have six people enrolled and will enroll more in the apprenticeship program.

This started in the pandemic and I was concerned about people coming back to work. The family wanted to make it a career and show it's not a dead-end job. You might learn management, food cost, community involvement, but whatever it is, it's all tied to the magic of food. We are also involved in school gardens. That's little children growing food and understanding about taking care of the product. from the seedling to the plant that can be used in food.

Would you let someone else take the reins of El Charro Cafe and Flores Concepts?

I never really entertained the fact of bringing on other chefs. Five years ago, along with my son Raymond, I decided that I am not going to be here forever. I am going to be 76, so we needed to make sure that whoever was part of our world, kind of felt and understood the true legacy and taste of our food. So we have started bringing other people in.

What about the signature sauces, who will make those in the future?

It's happening now, and if [the restaurants] have a new one, it will be under another's direction of tasting and testing. These are people that are a lot younger than me and can carry on with our family.