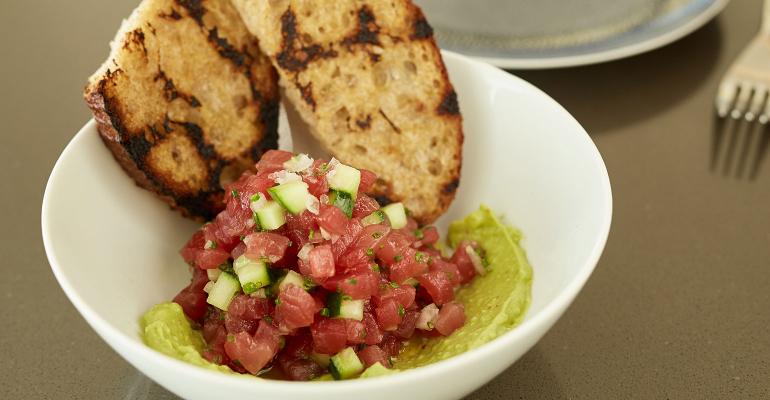 The founders of the California Pizza Kitchen chain plan to launch a new pizza concept in Los Angeles next year called Smoke & Stone.

Rick Rosenfield and Larry Flax, who founded CPK in 1985 and served as long-time co-CEOs, discussed the new concept in an interview about Bottlefish, a polished-casual seafood concept the pair opened in Los Angeles’ Brentwood neighborhood last week.

Both concepts are the product of Flax and Rosenfield Development, a company created to raise capital for new projects the duo plan to pitch to their deep network of retail developers across the country. They declined to say how much has been raised, but said a solid base of capital is available to grow both brands. Flax and Rosenfield spent years building CPK as an anchor restaurant outside malls. In those early years, mall operators were reluctant.

“They saw us as parasites,” Rosenfield said.

But full-service restaurant pads outside malls soon became the norm.

The two sold their interests in CPK with the brand’s acquisition by private-equity firm Golden Gate Capital in 2011, for $470 million. They also stepped down as co-CEOs.

Flax and Rosenfield, both former attorneys, did not sign a noncompete agreement that might have prevented them from returning to the pizza business.

The new Smoke & Stone will fall in the casual-dining space, but will be very different from CPK, Rosenfield said, although details are still in development.

CPK introduced the world to its signature barbecue-chicken pizza under the co-CEOs. But Smoke & Stone will aim to break new ground in pizza innovation, Flax said.

“We’re not going to do pizzas everybody is familiar with,” he said. “They may become familiar.”

For instance, the two haven’t decided whether the new restaurant will use wood-fired or gas-fired ovens.

CPK was founded with wood-fired ovens, but when the brand moved into airport locations, it began to switch to gas-fired due to venting requirements. It eventually converted the entire chain to gas-fired, and quietly dropped the phrase “wood-fired” from its logo.

“We may end up with some sort of hybrid,” he said of Smoke & Stone.

Like Bottlefish, Smoke & Stone will be polished casual, focusing on from-scratch preparation and premium ingredients, they said.

Casual dining has suffered in recent years because legacy brands have a “credibility problem” with today’s consumers, who look for healthful dining options, Rosenfield said.

Bottlefish targets seafood because a growing number of diners are moving away from meat, including Flax, who had a recent health scare that put him in the hospital for nine days battling an infection. Now he tries to “eat clean,” reading labels and choosing organic, he said. Bottlefish and Smoke & Stone are designed to be multiplied as destination restaurants that could be co-located and will bring foot traffic to malls at a time when consumers are increasingly shopping online.

Observers have been predicting the death of malls for 30 years, Rosenfield said. But instead, malls are increasingly becoming lifestyle centers and restaurant hubs, like the landmark retail center The Grove in Los Angeles by developer Rick Caruso, who was also CPK’s first franchisee, and served on the chain’s board.

Shortly after Flax and Rosenfield left CPK, they announced plans to open a fast-casual pizza concept. But they later decided against it, saying fast casual “isn’t in their DNA,” Rosenfield said.

“I think fast casual is running its course,” Flax said. “With our customer base, people want to be served.”

Both Flax and Rosenfield say they wish CPK well.

Bottlefish, it should be noted, is located in a former Daily Grill unit, next to a CPK restaurant, which they opened in 1998, and where Flax dated his now wife.

The two, however, said they can offer a new take on casual-dining pizza with Smoke & Stone.

“Unique is so important,” Flax said. “If there’s one thing we were able to prove at CPK, it’s that we’re pretty creative.”