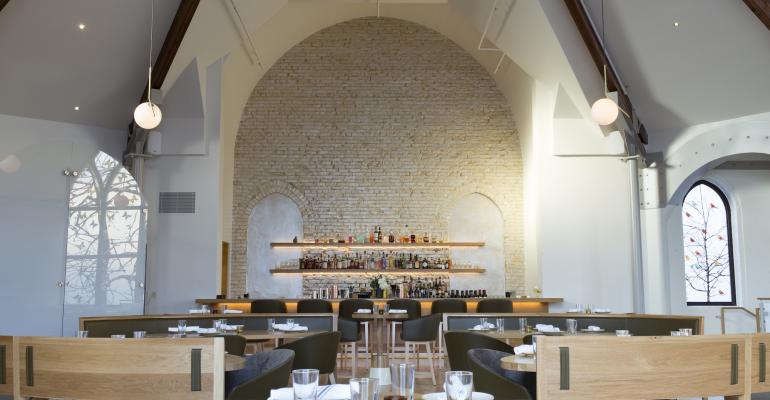 The Preacher’s Son inhabits the former First Christian Church of Bentonville, which was built in 1904 and is located just off the downtown Bentonville square.
Trends>New Restaurant Concepts

Is Bentonville, Ark., the next great restaurant town?

James Beard-nominated The Preacher’s Son is drawing national attention to this corner of Arkansas, with the help of Chef Neal Gray and GM Adam Greene

Certain cities always lead the conversation when discussing the best restaurant markets in America. New York, San Francisco, Los Angeles and Chicago are mainstays, and Portland, Ore., Washington, D.C., Philadelphia, New Orleans and Houston are also ubiquitous. But in recent years, smaller cities have begun to open and operate some of the most exciting concepts in the country, so it has become increasingly difficult to ignore places like Greenville, S.C. and Birmingham, Ala. With three recent James Beard nominations, we can add Bentonville, Ark. to the list.

The Preacher’s Son inhabits the former First Christian Church of Bentonville, which was built in 1904 and is located just off the downtown Bentonville square. The design leans into that heritage and features vaulted ceilings, an updated bell tower with 288 hanging gold bells and modern stained-glass windows constructed by a local artist. The floors are hand-hewn hickory, artwork lines the walls and there’s a tapestry behind the bar.

The Preacher’s Son is part of Ropeswing Hospitality Group, which has several other local concepts in its portfolio, including Pressroom, Record, Louise, Blake St. and Co-op. The group is backed by the Walton family. Managing principal Tom Walton is the grandson of Helen and Sam Walton, who founded Walmart, as well as the Walton Family Foundation.

An Arkansas native, Gray returned home after stints at some of the most prestigious restaurants in the country, including The French Laundry in California, and Blue Hill at Stone Barns in New York. Most recently, he was chef du cuisine at Simon & the Whale in New York City.

“My wife and I were starting our family in March of 2020 when the pandemic gripped NYC and our restaurants closed,” said Gray. “This allowed us the time to turn our attention to other possibilities and we began looking into Northwest Arkansas.”

He was inspired by all the investment going into Bentonville and saw growth potential there, he said. After talks with Ropeswing, he accepted an offer to relocate and run the kitchen at The Preacher’s Son.

Gray was joined by general manager Adam Greene, who also left New York for Arkansas, and quickly became enamored with Bentonville. Together, they oversee the 75-seat dining room, plus a patio and rooftop deck. There’s also Undercroft, a speakeasy-style bar below the restaurant with 10 bar seats and tables that accommodate another 50 to 60 guests. Undercroft supplements its menu of craft cocktails and small plates with quarterly pop-ups that embrace themes like a tropical oasis or Miracle, the international holiday pop-up.

Greene admits that operating in a smaller market can prove challenging at times. Supply chain issues make certain ingredients hard to find, and they can’t get all the same beverage options available on the coasts. But both Greene and Gray sing the praises of Bentonville.

“It has a small-town feel, but it’s really quite sophisticated,” said Greene, noting that the city has a lot of good restaurants, and that the James Beard nominations bring attention to the area. “People understand good food, service and hospitality. They know when they’re being treated well and with care. Neal puts a lot of attention and detail into the food and flavors, and I put a lot of attention into our staff. We’re blessed to have such a good team here.”

Their work paid off, and in 2022 The Preacher’s Son was named a semifinalist for the James Beard Foundation Outstanding Hospitality Award, joining local spots The Hive and Yeyo’s, which both got Best Chef South nominations.

Bentonville may be a smaller pond than Gray’s previous stints, but he approaches his work now with a similar dedication to place. Certain ingredients like raw oysters and mussels are sourced from the coasts, but he looks internally for much of the menu’s meat, poultry and vegetables.

“We get to know all of our local farmers, and the amazing animals and foodstuffs they raise really inform our menus,” he said. “We strive to keep preparation simple and let the quality of good farming shine.”