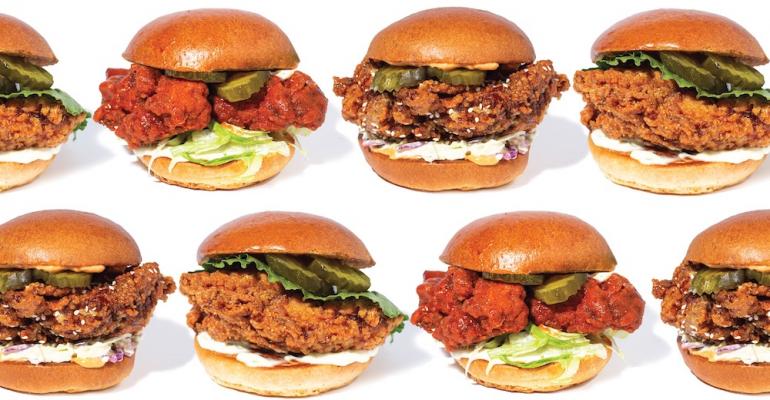 The idea for How Crispy began in 2018: Serve good fried chicken to the people of Atlanta. But after finding a location for the restaurant, plans were derailed by demolition and construction issues. Eventually, the owners moved the operation to a 750-square-foot spot and decided to focus on sandwiches. Then the pandemic hit, and their investors backed out.

This isn’t the typical recipe for success, but the trio of founders — William Silbernagel, Greg Best and Bart Sasso — used the setback as a chance to test their venture with a series of pop-ups. They began hawking chicken out of Halfway Crooks, a beer joint across the street, and then at Best’s and Sasso’s restaurant and bar, Ticonderoga Club.

The delay turned out to be a blessing in disguise.

“We were lucky to draw lots of people to the pop-ups, and we got to refine our processes,” said Silbernagel, the former chef at Argosy and Bookhouse Pub. They built up buzz and goodwill in the community, and by the time How Crispy Express officially opened in January, there was a line around the block.

The tightly curated menu features four chicken sandwiches ($8-10), all made with fried chicken thighs that are marinated in herbs, spices and lemon juice, and then bathed in buttermilk. The flavor profile is lemony and herby, fitting for a town where lemon-pepper is king.

“What makes us different is we use dark meat and have sandwiches available in several different varieties — it’s not just normal or painfully hot,” said Silbernagel. “We do a double-fry that’s super fast. It’s actually more express than we thought.”

Sides include vegan collard greens, mac and cheese, a salad and yucca fries. “They’re a little lighter and more creative than the usual sides, but still accessible and not too chef-y,” he said.

How Crispy Express was always meant to be a takeout place where diners could grab a quick lunch and go on their way. But those who want to eat on site can hang out at the standing drink rails. Soon, they’ll be able to score a seat inside, but due to shipping delays, the restaurant’s stools haven’t arrived yet — Silbernagel said they’re currently stuck on a barge somewhere.

Another How Crispy location is already in the works. It’s slated to open downtown in the fourth quarter in a space about double the size of the current operation. It will still be takeout-focused without much seating, but you can expect a more expansive menu that will include buckets of fried chicken.

That’s just the start. Silbernagel said that, eventually, the group would like to expand to more markets within the state and elsewhere along the east coast.

He credits the restaurant’s replicability to its tight menu and casual nature. “Get the basics right, and it’s a pretty easy concept,” he said.