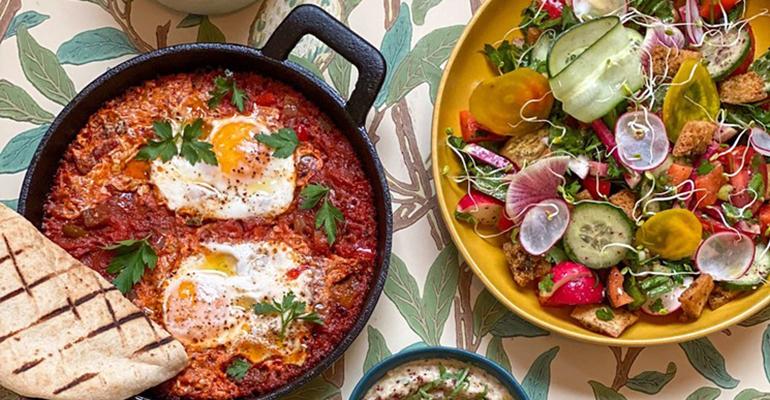 Two Florida restaurateurs have partnered to bring Tel Aviv-style family dining to Miami Beach at the new Abba, which opened in March.

James Beard Award semi-finalist Sam Gorenstein, chef at My Ceviche and Zuuk Mediterranean Kitchen, has joined with Omer Horev, co-founder and CEO of the five-unit fast-casual Pura Vida Miami, on the new concept, which attempts to meld the cultures of the Israeli city Tel Aviv with that of Miami.

“Opening Abba is a homecoming for both of us,” said Horev in a statement. “We feel like we’re coming full circle, opening a restaurant that reflects what we like to eat at home in a neighborhood that feels like home to both of us —and we welcome our neighbors to feel like Abba is their home as well.”

Both fathers themselves, Gorenstein and Horev decided to go with the name Abba, which means “father” in Hebrew.

While Horev is Israeli, Gorenstein was raised in Columbia eating the Syrian food of his ancestors, so the menu is a combination of multiple flavor profiles and cuisines that are similar but different.

Just don’t call it Israeli cuisine. As Gorenstein told Restaurant Hospitality, “We're not an Israeli restaurant … we’re Tel Avivian,” which he contends is much closer to the culture of Miami.

“When we opened Abba, we said ‘Hey, Tel Aviv and Miami are truly connected in so many ways.’ We want to bring that connection together by opening this restaurant,” said Gorenstein. “Tel Aviv and Miami share so many similarities. Both of them are coastal cities, both of them are summer almost year-round. So, you have the beach, sunny weather and Art Deco architecture. Both cities are a melting pot of culture.” 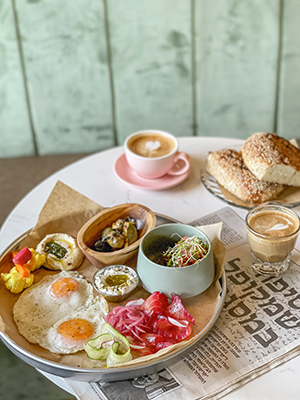 The menu also seeks to go beyond hummus and pita — which is most Americans’ view of Middle Eastern food. This menu encompasses a broader range of Mediterranean and Middle Eastern food — from Gorenstein’s favorite shakshuka to breakfast pastries made in-house like the Nutella Babka or Burekas (an Israeli puff pastry, stuffed with fillings such as spinach and Bulgarian feta, potato and caramelized onion).

And for something more filling, there are pitas stuffed with falafel and lamb kofta and Jerusalem bagels served open face and topped with avocado, egg and feta cheese, along with hummus, arugula, tomato, and tahini. The pita is made in-house.

Menu prices at lunch range from $15 to $34, with sides and starters around $6; and $16 to $24 at breakfast. The restaurant is expected to offer beer and wine down the road.

“I think this is like a little piece of paradise where, if you're a guest, you can come in, relax and forget about everything else that goes on in your life and just enjoy a wonderful experience,” said Gorenstein.

Eventually the 50-seat restaurant will open for all-day dining but for now, it’s open breakfast through sunset, with breakfast pastries eventually being offered only on weekends — though that’s subject to change as Gorenstein said the pastries have become quite popular on weekday mornings.

The restaurant itself has both indoor and outdoor seating year round for customers to pick which they are more comfortable with at this point in the pandemic.

As seasoned restaurateurs, both Horev and Gorenstein knew opening during the pandemic would be difficult and one of the largest challenges would be finding staff. While Miami and the state of Florida on the whole have been fully open for months, Abba — like restaurants in much of the country — had initial trouble finding staff.

But now that they’ve been open for five weeks, Gorenstein said he feels confident with his staffing levels. “If you operate your business correctly, people will stay,” he said.

“I feel proud that I opened a business that's successful, at least up ‘til now, and I'm able to provide employment to a lot of people that need it,” said Gorenstein. “We’ve got to get the economy going again and it starts with business owners.”