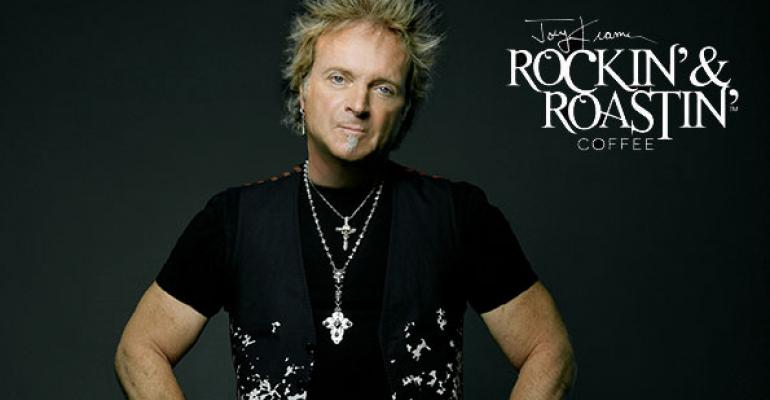 Whether you’re entertaining fans with a monster drum solo or entertaining customers with a signature Ethiopian espresso, it’s all about putting passion into your work. While many struggle to strike a chord, a number of musicians have successfully channeled their music careers into the restaurant space.

Add Aerosmith drummer Joey Kramer to the list. Kramer founded Rockin’ & Roastin’ coffee brand in 2012 and will open his first brick and mortar location early next year in N. Attleborough, MA. Kramer’s coffee brand is already distributed through more than 1,000 grocery stores in 13 states on the East Coast. The company is selling bagged coffee now and is developing single-serve cups.

Next up: a brick and mortar location in N. Attleborough, which is just north of Providence, RI, and about an hour south of Boston. Baristas will prepare a variety of coffee drinks using the traditional Rockin’ & Roastin’ brews (Guatemala, Ethiopia and Sumatra), a signature espresso, a Swiss water-based decaffeinated version and organic flavored coffees. Joey Kramer’s Rockin’ & Roastin’ Café will offer breakfast sandwiches and fresh baked goods, including coffee cakes, Danishes, pastries and muffins that are baked in house.

The atmosphere at Rockin’ & Roastin’ will focus on—you guessed it—rock ‘n’ roll. The 1,500-square-foot coffee shop will feature Kramer’s full drum kit from the “Let Rock Rule!” world tour, backlit in a glass jewel case visible from the road. Signage will display the Rockin’ & Roastin’ dragon, and the coffee shop ceiling will be lined with rock images and memorabilia.

The shop will offer table seating and plush couches, dark crimson tones and ornate moldings and fixtures. Rock videos and concerts will play on screens in the background and the store will offer complimentary WiFi. 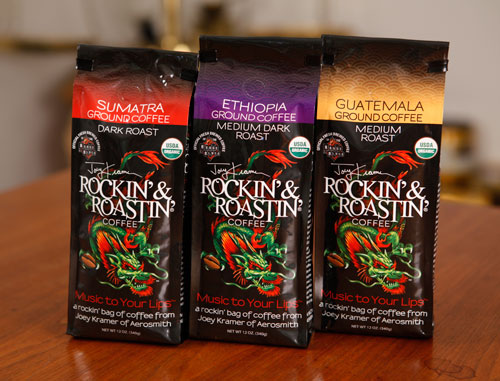 “I’ve always wanted to start my own business and I’m humbled by how far Rockin’ & Roastin’ has come in the past couple of years,” he says. “Opening up our flagship café is another way that I can continue to entertain fans in new and unique ways.”

Restaurants are a common business venture musicians look to when hoping to diversify their interests. There are plenty of examples where it didn’t work out, but also plenty of success stories.

• In nine years, Toby Keith has opened 16 full-service I love This Bar & Grill locations with 10 more in development. The country singer’s restaurants feature large bars in the shape of guitars and serve American cuisine with a focus on Southern food. The bars regularly have live musical entertainment from local performers.

• One restaurant chain just wasn’t enough for Jimmy Buffett, who licensed song titles for both Cheeseburger in Paradise and Margaritaville restaurant chains. While Cheeseburger in Paradise changed hands multiple times and eventually ended up closing more than half of its locations, the casual Margaritaville continues to be a hit and now boasts more than 20 locations.