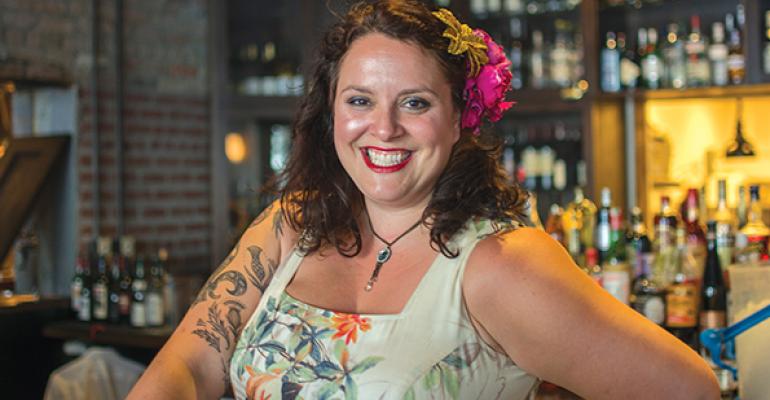 We first crossed paths with Gullo in New Orleans at SoBou where she made us a show-stopping rye whiskey cocktail called Charbonneau Way. She entered that drink in Restaurant Hospitality’s Best Cocktails in America Contest and won. It was no contest, really, for a chick who blogs under the name RyeGirl.

Despite her experience as an off-Broadway singer, actress and theater teacher in New York City, Gullo was destined to hold court behind a bar. At age seven her grandfather Vincent taught her how to make a Manhattan, and during a time years ago living in Dublin, she turned her apartment into a classic cocktail salon.

A member of the New York chapter of the Ladies United for the Preservation of Endangered Cocktails, Gullo served as the head bartender at Fort Defiance in Brooklyn and later helped open The Beagle in the East Village. That job and frequent trips to Tales of the Cocktail took her to New Orleans, where she landed the gig at SoBou, which is part of the Commander’s Palace stable of restaurants.

Gullo’s latest post is just miles away at chef Nina Compton’s new eatery, Compére Lapin, in the Old No. 77 Hotel & Chandlery. If you get a chance, drop in and order a Big Chief [2 oz. Buffalo Trace, ½ oz. Averna and ½ oz. Punt e Mes]. It’s served up in a coupe with a flamed orange peel garnish. The cocktail traces Gullo’s circuitous journey from Manhattan to Louisiana.

“I wanted to use Averna because the Sicilian influence is very strong here in New Orleans,” she says. “It’s also what I like to imagine my great-great grandfather doing a shot of before he left Palermo for the New World.”

We’re not so sure about doing a shot of Averna, but our journey will always lead us to where Gullo’s shaking and stirring things up.