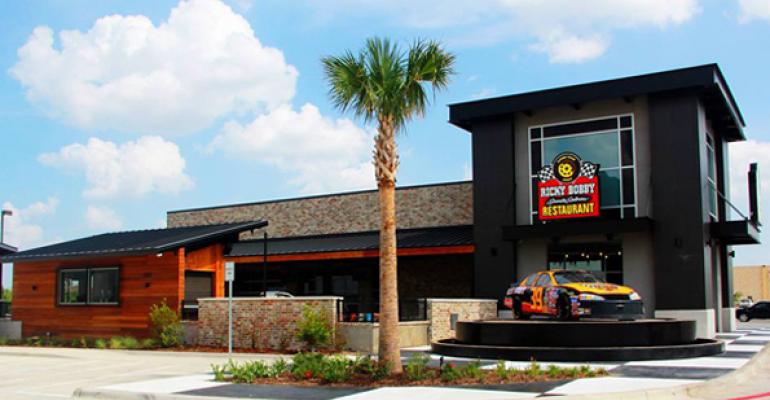 Maybe it will be smooth sailing for the owners of Fort Worth’s just-opened Ricky Bobby Sports Saloon and Restaurant, a concept based on the hilarious Will Ferrell NASCAR movie “Talladega Nights: The Ballad of Ricky Bobby.” Or maybe the legal department of Columbia Pictures will demand an immediate name change instead. But keep an eye on what—if anything—happens, because this situation could create a new and perhaps cost-free way for restaurant owners to adopt an instantly popular theme.

It’s not like the backers of Ricky Bobby Sports Saloon and Restaurant are naïve business people. The owner is Rick’s Cabaret International (RCI), a company that is primarily in the upscale adult nightclub business—34 clubs in all—and has recently opened a few restaurant-only ventures. The first was Bombshells, a “breastaurant” also located in Fort Worth. Ricky Bobby’s is the second.

This publicly traded company—market cap: $83 million—has attorneys, too, and you can bet they vetted the use of the Ricky Bobby name well before the restaurant opened. The Dallas Observer paraphrased the remarks of RCI official James Watkins this way: “with the movie being trademarked and all, they can't use direct quotes or anything from the movie. But since proper names can't be trademarked, they used it.”

"It's really just a play off things," Watkins added.

“’It is clear that when cartoons or movies are copyrighted, a component of that copyright protection extends to the characters themselves, to the extent that such characters are sufficiently distinctive. See, e.g., Gaiman v. McFarlane, 360 F.3d 644, 661 (7th Cir. 2004) (“[A] stock character, once he was drawn and named and given speech [in a comic book series] . . . became sufficiently distinctive to be copyrightable.”); Olson v. Nat’l Broad. Co., Inc., 855 F.2d 1446, 1452 (9th Cir. 1988) (holding that “copyright protection may be afforded to characters visually depicted in a television series or in a movie” for “characters who are especially distinctive”); Metro-Goldwyn-Mayer, 900 F. Supp. at 1296 (holding that plaintiffs’ copyrighted James Bond films established a copyright in the character of James Bond).’"

Who’s right? We’ll let the intellectual property attorneys sort this one out—if, indeed, the issue ever comes up. After all, this movie was first released in 2006.

In the meantime, the restaurant is going great guns. Located near the Texas Motor Speedway, it attracts sports fans of all types, not just NASCAR devotees. Menu creator David Simmons describes the food offerings this way:

“We have traditional items with a Ricky Bobby flair such as our Mac ‘n Cheese Bacon Burger, Crazy Corn, Funnel Cake and, yes, the largest Chicken Fried Steak in Texas,” Simmons says. “And forget the potato skins; you’ve got to try the jalapeno skins stuffed with cream cheese.” One beverage highlight: snow cone shots.

Let’s hope this restaurant gets to keep its name. It could open the door for other operators to use equally familiar names drawn from popular culture. Just stay away from Harry Potter and other money-coining franchises the studios will want to keep for themselves.