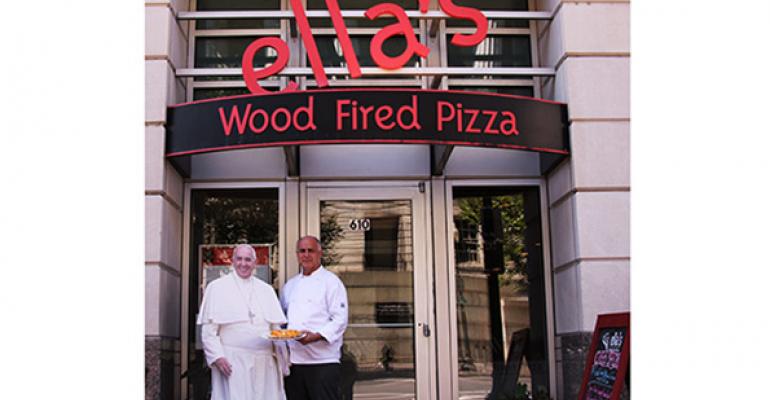 Pope Francis visit: The promotional opportunity you’ve been praying for

It seems unlikely there could be a tie-in between a global religious leader’s visit and the promotional needs of a full-service restaurant. But Ed Hanson, chef/owner of Ella’s Wood Fired Pizza in Washington DC, has come up with one. He’ll be serving a special “Pope’s Pizza” during the upcoming U.S. visit of Pope Francis.

The Washington segment of the Pope’s three-city itinerary will be jam-packed. He’ll be meeting with President Obama and is scheduled to address Congress while in DC. But he’d sneak out to Ella’s for a slice if he could.  When queried earlier this year about whether there is anything he doesn’t like about being pope, Pope Francis replied that “the only thing I would like is to go out one day, without being recognized, and go to a pizzeria for a pizza.”

He’d probably find Ella’s Pope’s Pizza especially appealing. It reflects the color scheme of the gold and white Vatican flag. The pizza is made with fresh mozzarella, ricotta and vine-ripened yellow tomatoes that have been marinated in olive oil and basil, all of it set atop the restaurant’s signature thin crust. The 10-inch pie is priced at $15, $20 if paired with Birra Moretti, an imported Italian beer.  A seven-inch version can be had for $6 in the restaurant’s bar during happy hour.

The Pope’s Pizza will be a special from Sept. 21 through the 26th. Business could be brisk. Ella’s Wood Fired Pizza is located just one block from Washington’s St. Patrick’s Church. Pope Francis will be making a brief stop there the morning of Thursday, Sept. 24, just after his speech to a joint session of Congress. He’ll head to NYC immediately after.

There’s a social media component to this promotion. Hanson acquired a life-size cutout of Pope Francis and he encourages customers to take selfies with it and tweet them to @ellaspizzadec #Ella’sPopePizza. The restaurant will award a pair of $50 gift certificates to the person who takes the best selfie and to whomever submits the most selfies with the Pope.

Only the “World Meeting of Families Icon Holy Water Font” ($25, the same price as an “official” Pope Francis bobblehead doll) seems to have a direct tie to the Catholic faith.

It’s not too late for other operators to come up with a Pope Francis promotion of their own. The pontiff will be in the U.S. from Sept. 22 through Sept. 27, finishing off his trip with an outdoor mass in Philadelphia expected to draw 1.5 million worshippers. The media coverage will be massive, so a creative short-term special similar to Ella’s could be effective for many other restaurants.