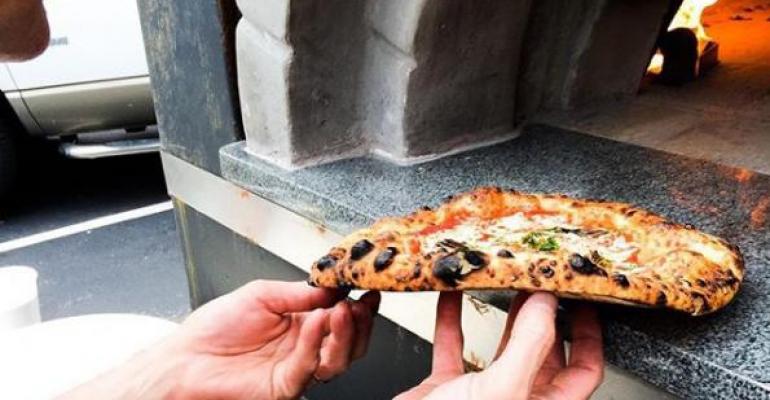 A pop-up restaurant or event is a buzz-worthy marketing tool. Whether you’re introducing a new restaurant, highlighting your cocktails, or showcasing your creativity in the kitchen, here are some ways a pop-up event can bring you and your guests closer together.

Preview a new restaurant
Opening a restaurant in a new city can be tough. So when Gerard Craft, chef and owner of St. Louis-based Niche Food Group decided to open an outpost of Pastaria in Nashville, he chose to host a series of pop-ups leading up to the restaurant’s grand opening this September.

“We partnered with a popular local restaurant and were able to spread the word through their social media, local media and our own friends and family,” says Craft. “We’ve held two events so far—the first was a sit-down pasta dinner, and the second offered pizzas from a walk-up tent. We plan to hold three more pop-ups before the opening.”

While Craft says a pop up in a new town can be challenging in some respects, it has its advantages, as long as you keep it simple. “You’re cooking in a kitchen you’re not familiar with, and it rained during our last event,” he says. “But we served 150 guests at each event, which was a great way to introduce the concept, gauge our new audience, and build our local social media presence.”

Highlight your cocktail program
Mixologist Lauren Parton, who heads up the beverage program at Loews Chicago, also hosts her own underground Chicago cocktail parties four to five times a year under the name Sub Rosa. “The events provide a more intimate space to meet and talk with people,” says Parton. “It ends up being great for networking and there’s always a lot of exchanging numbers and cards during the evening.”

With pop-up events, Parton suggests keeping things basic. “Don’t get too fancy with it,” she says. “You’re always going to forget something. I usually pre-batch my alcohol so I can spend more time talking and connecting with my guests.”

Helping to keep the events running smoothly, Parton’s husband, also a bartender, assists behind the bar, and one or two servers keep the menu of three cocktails, light bites, beer and wine on track.

Promotion is a vital component of the Sub Rosa pop ups, seeing as they’re all held in secret locations around the city where she shares a percentage with the hosting restaurant. “I reach out through my newsletter, blog, mailing list and social media. Once tickets are purchased, the location is revealed to attendees a couple of days before the event,” says Parton.

Go beyond your four walls
After working in kitchens such as Fat Duck in Bray, UK, McCrady’s in Charleston, SC., and Saison in San Francisco; Jeffrey Stoneberger decided to explore his own creativity with his dedicated pop-up, 2 Nixons, back in Charleston.

“In a restaurant, everything is cost-based, but if you take away the process of having to pay rent for something, then you can have really high quality ingredients at a much more affordable price,” says Stoneberger. “The way that sources are secured is exactly the same, but it’s so much more affordable when you don’t have the costs of a restaurant.”

For prep work, Stoneberger uses a local commissary and kitchen, which makes the legalities of licensure easier and provides 2 Nixons with a home base. “I crank the promotions harder than anyone I know,” says Stoneberger. “And I try to offer something that no one else does. There’s ramen everywhere, but we offer a product that’s very unique, including rotating broths based on ingredients available locally.”

Generally, Stoneberger offers two steady ramens as well as a secret menu. “The secret menu is where I’m able to get really creative,” he says. “I think the secret sauce behind any pop up is based on excitement and fun. The whole point is that you never know what you’re going to get.” At the same time, Stoneberger says that the food has to be approachable for the masses. “Offer something that’s super unique and ingredients you had to bust your butt to get.”

Give back
“One of the coolest and most moving pop-up events we ever held was when Niche partnered with a local grocery store and popped up at a soup kitchen,” says Craft. “The majority of those people don’t have the opportunity to get waited on a lot; we created a three-course meal and had servers take their orders.”