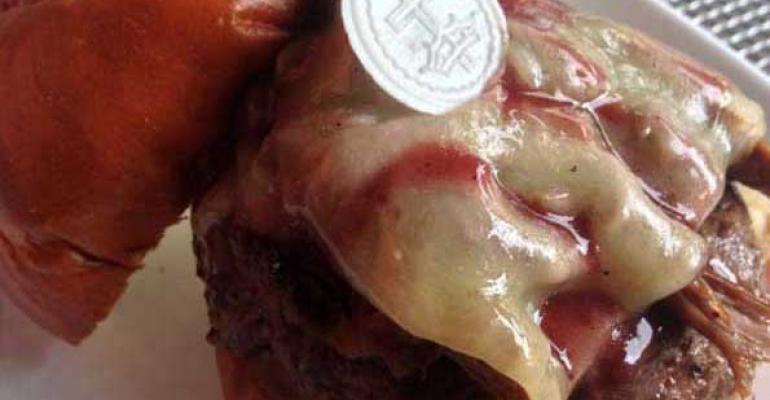 It’s OK when a restaurant promotion is a little edgy, but you have to know where the edge actually is and be careful not to go over it. That’s the lesson Chicago burger restaurant Kuma’s Corner is learning after it chose to garnish its October burger-of-the-month special with a communion wafer. It’s a move that is generating the kind of negative feedback—not all of it from Catholics—that no restaurant would want.

The idea seemed innocent enough at first. Kuma’s Corner has a heavy metal orientation and routinely names its monthly burger specials after bands from that genre. Its October special was designed to honor Swedish metal band Ghost, a big-deal band that played Coachella this year and has put out a Grammy-nominated album. Ghost's members claim to be Satan worshippers, so the ingredients in the Ghostburger seemed like just the thing that would attract metal fans to Kuma’s Corner.

Here’s how the restaurant put the word out on its Facebook page:


Both local and national media pounced on this story immediately. Kuma’s Corner backpedaled a bit, saying it meant no offense but would stick to its guns and serve the Ghost burger all month.

“Kuma’s Corner is aware that in some cases, people have unfortunately found reason to find offense at our recent special menu addition the Ghost. We make hamburgers for a living. We are a small nine-table restaurant in the Avondale neighborhood of Chicago. And we love heavy metal. There is a band doing music that we enjoy particularly called Ghost. They are from Sweden. As with all of our burgers, the Ghost was created to pay homage to the music they’ve created. We work very hard on coming up with creative combinations for our food just as a band would work very hard to be creative with their music and we think it shows in their regard so we found it appropriate that with them being on tour this month, and this month being October, we honor them in this way.

“…we, in no way, created this as a commentary on religion or as an attack on anyone’s personal beliefs. In the past we have done a number of burgers dealing with this same exact topic to very little fanfare. Never in the spirit of offending anyone, and always in mindset of praising a band for the work that they do.”

No harm, no foul, the restaurant seems to be saying. But as a gesture of good faith, Kuma’s Corner “made a $1,500 donation to the Catholic Charities of the Chicago Archdiocese as we understand that they share our mentality of serving anyone in need from any walk of life.”

It’s the kind of public relations move that can help put a controversy to rest…providing the recipient accepts the gift. The Chicago Archdiocese didn’t.

"Catholic Charities has not received nor will we accept a donation from Kuma's Corner,” a spokesperson told NBC Chicago. “The Eucharist is a central part of the Catholic faith and we strongly urge Kuma's Corner to discontinue selling a burger that disrespects that faith and the faith of all Christians.”

Kuma’s Corner isn’t backing off. “The thing with this is, the communion wafer is unconsecrated, so until that happens, it's really just a cracker," director of operations Luke Tobias told the Chicago Tribune.

Kuma’s Corner had a solid business prior to this flap, and operates a second location in Chicago. It’s going to be interesting to see what effect the Ghost burger controversy has. But we’re betting November’s special burger at Kuma’s is going to be a lot less likely to cause controversy than this one has turned out to be.

Quirks That Work: Ideas to Get Your Marketing Message Across
Sep 01, 2009

How to create a following for your restaurant
Mar 01, 2013