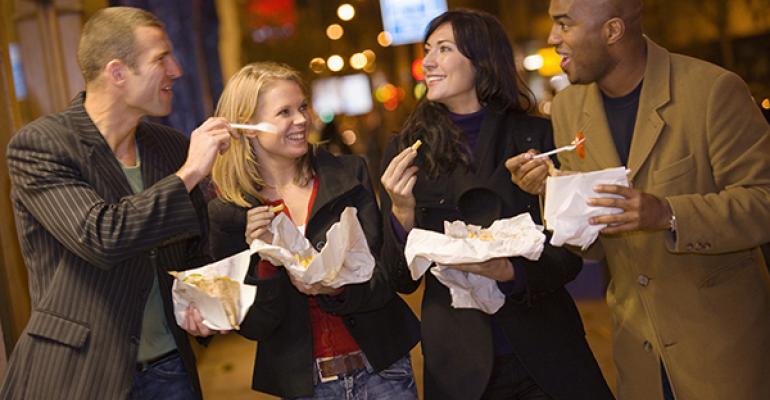 Takeout and delivery customers get cash back when they order food using Groupon To Go, but the hefty discount doesn’t come out of the restaurant operator’s pocket.Yet.

Tech giants like Amazon, Uber and Yelp want a piece of the $70 billion restaurant takeout and delivery market. So do specialist outfits like GrubHub/Seamless and DoorDash. But none of them have made a bigger initial splash than Groupon. Its new Groupon To Go service, just launched in Chicago, gives customers an immediate 10 percent cash back payment on their order—with Groupon, not the restaurant, paying for it.

The deal-of-the-day company already has 25 million active users, so restaurants that sign up for Groupon To Go will get plenty of marketing exposure right off the bat. However, potential customers who go to Groupon’s site expect a discount, preferably a big one, for every purchase. Deals are the only reason they go there. Someone will have to give them one if and when the Groupon-funded 10 percent kick back expires.

When might that be?  “The 10 percent comes out of Groupon's margin,” says company spokesperson Nick Halliwell. “It's an indefinite promotion that we're running.”

The end of the company-paid 10 percent cash back deal, should it occur, wouldn’t necessarily be a deal-breaker for restaurant operators.

Many of them already use Groupon deals as part of their marketing strategy. There’s no better way to fill up a dining room on a slow night or during a slow season or otherwise generate a ton of business—albeit at heavily discounted rates—than a Groupon deal. Operators just have to figure out how to structure takeout and delivery deals so they produce optimum results for their particular restaurant without giving away the store.

Another factor: delivery customers (but not takeout) expect to pay a delivery fee. That gives both Groupon and restaurant operators plenty of wiggle room to create dollars-off deals which would still see the meals purchased at full price.

Groupon To Go’s competitors already use this strategy. For example, for its launch into Phoenix, Silicon Valley-based delivery startup DoorDash is reducing its standard $4.99 delivery fee to just $1 for the first month of operation. It’s big savings from the customer perspective, but restaurants still get full price for their food and drink.

Groupon expects to expand its service to Boston and Austin later this year. More markets will follow quickly. Groupon purchased Baltimore-based food-delivery service OrderUp last month so it can create a national footprint in a hurry. OrderUp already does business in 40 cities, many of them college towns.

“Most people get delivery and takeout multiple times a month, and with Groupon To Go, we’re giving them an easy way to save money every time they do so,” says company vp/gm Sean Smyth. “Delivery and takeout is a natural extension of our local deals marketplace, adding hundreds of the best restaurants to Groupon—including many that haven't offered online ordering until now.

Restaurant operators already have a choice of several service providers if they want to outsource the logistics involved with processing takeout and delivery orders. Big chains like Taco Bell and Dunkin’ Donuts are testing and/or rolling out delivery service with various partners in certain markets. So are Starbucks and Chipotle.

These latter two chains work with San Francisco-based delivery service Postmates. Your restaurant may also be part of the Postmates delivery network, even if you never heard of the company and don’t want it delivering your food.

But whether you choose to work with an outside provider or take a DIY approach to takeout and delivery, all the activity in this segment indicates that there’s money to be made in it right now and should be more in the future. If you’ve already figured out how to make Groupon deals pay off for your restaurant, consider exploring the company’s Groupon To Go option. Discount takeout is a powerful marketing position if you are somehow able to make money doing it.