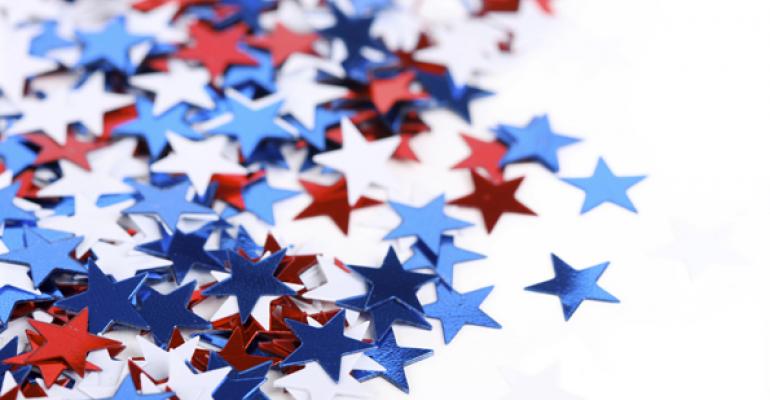 It’s a touching moment at noon each day when the lunch rush at Baltimore’s Mission BBQ comes to a halt while patrons and staff salute the U.S. flag and belt out the national anthem. But it also demonstrates that in an industry perpetually in search of marketable themes for new restaurants, simple patriotism may have been overlooked.

They’re not overlooking it at Mission BBQ. This fast casual concept opened on Sept. 11, 2011, the 10th anniversary of the World Trade Center bombings. The overall theme is honoring the men and women who serve our country, a group that includes the military, both active and retired, plus firefighters, police officers and other first responders.

The restaurant’s menu is as all-American as it gets—barbecue, ranging from Texas-style brisket and pulled pork to baby back and St. Louis style ribs. Donations to the Wounded Warrior Project, USO, Honor Flight Network and local police- and fire-related charities demonstrate the sincerity that lies behind the concept.

Mission BBQ operates two stores in Maryland and plans to open two more there this year. A York, PA, unit is scheduled to be up and running just before the end of 2013. The company’s goal is to have 40 restaurants open nationwide by 2018.

It might get there. The beauty of a patriotism-themed concept is that it comes with a large built-in constituency. In addition to military men and women and their families and police and fire workers and their families, many other U.S. citizens might be attracted to a restaurant that takes this stance.

The politics are definitely in place. While overt patriotism has always been strong on the conservative side of the political spectrum, the most liberal of liberal thought leaders now express much the same sentiment in highly visible ways. Whether it’s Rachel Maddow on MSNBC demanding better treatment of veterans or Comedy Central’s The Daily Show host Jon Stewart taking the lead on payback to 9/11 first responders and neglected wounded warriors, doing the right thing now involves honoring men and women in uniform who serve their country or local community. It hasn’t always been that way.

How’s the food at these places, which are much different from Besh’s more upscale restaurants elsewhere in New Orleans? American Sector earned a 23 (out of 30) food score from Zagat, has a three and a half star rating on Yelp and holds four stars on Urbanspoon.

Besh’s personal interest in a military theme stems in part from his service in the U.S. Marines. He saw duty as a non-commissioned officer in Operation Desert Storm.

Could a theme that emphasizes patriotism, “support our troops” or a similar sentiment work elsewhere? From the perspective of the upcoming Fourth of July weekend, it looks like a winner.