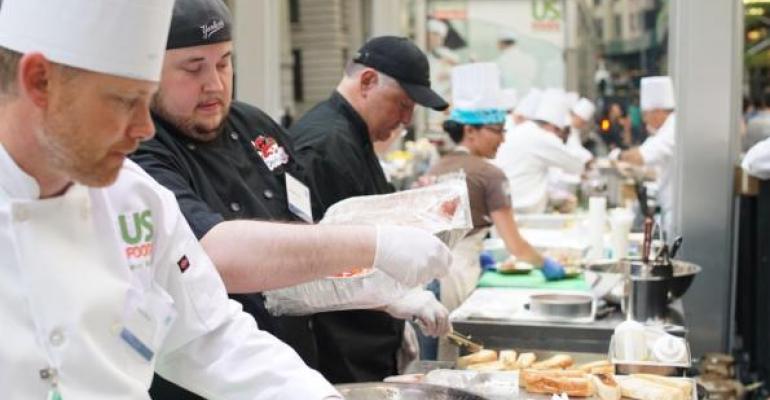 US Foods
<p>Chef Kenneth Danko (second from left) of Devilicious in Temecula, CA, prepares his signature lobster roll on a 50-foot line kitchen outside the NYSE last Thursday.</p>
Operations>Marketing

Many independent chefs and restaurateurs are accustomed to cooking in high-profile environments, but perhaps none as public as the sidewalk in front of the New York Stock Exchange. That's where five independent operators and chefs from across the country showed off their cooking skills last Thursday, feeding about 1,000 hungry Wall Street workers.

The chefs were on hand for an event sponsored by US Foods to celebrate its first day of trading on the NYSE. US Foods provided a fully functioning outdoor kitchen for the event, which featured:

With the theme of “celebrating hidden culinary gems,” the chefs cooked some of their signature dishes for the cookout, which US Foods says was aimed in part to shine a light on indies, which it called the most “under-resourced sector of the $782 billion restaurant industry.”

“Fifty-five percent of America’s restaurants are independently owned, yet more than 60 percent close within the first year,” the distributor pointed out prior to the event.