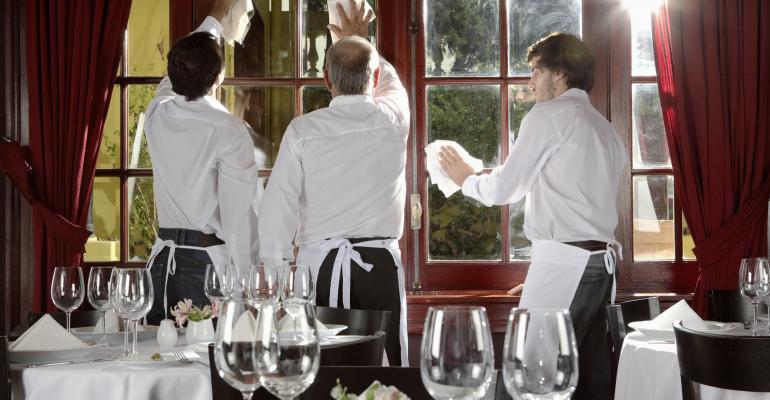 <p>Managers need to be mindful of how much time tipped employees are spending on non-tipped tasks, such as cleaning.</p>
Operations>Management

In my work as an expert witness for restaurant-related lawsuits, I have noticed that one class of suit is becoming more common: violations of the tip credit for non-tip-producing work. Here’s the legal definition of the tip credit according to the Fair Labor Standards Act (FLSA): “FLSA permits an employer to take a tip credit toward its minimum wage obligation for tipped employees equal to the difference between the required cash wage (which must be at least $2.13) and the federal minimum wage.”

Regulations related to the use of the tip credit for non-tip-producing work are specified under the heading of “Dual Jobs” in the U.S. Department of Labor, Wage and Hour Division’s Fact Sheet #15: Tipped Employees Under the Fair Labor Standards Act (FLSA). They are also referred to in the Department of Labor’s (DOL) Field Operator’s Handbook, Chapter 30d(e). Essentially the government is attempting to make sure that tipped employees receive their full and appropriate minimum wage.

The first part of this regulation, and where this section gets its name—dual jobs—occurs when an employee works for one employer in both tipped and non-tipped jobs. In this situation, the employer generally cannot utilize the tip credit for the non-tipped job. The exception to this rule is explained in the second lawsuit below. The second regulation is that an employer is allowed to use the tip credit to pay tipped employees when they do some non-tip-producing work, as long as the work is incidental (i.e., closely related) to the tipped employee’s work and this work does not take up more than 20 percent of the employee’s work week.

As opposed to Equal Employment Opportunity lawsuits where the burden of proof is on the employer, Fair Labor Standards Act cases place the burden of proof for unpaid wages on the complaining employee. Another legal challenge for these lawsuits is that if it can be proved that the law was violated for one tipped employee, it was likely violated for all tipped employees, so class action status is often pursued and granted for current and past employees. Another relevant issue may revolve around whether the tip credit violation was intentional or not.

For the most part, the regulations regarding each requirement are clear—the tip credit can be used for tip-producing work and for incidental and closely related non-tip-producing work that does not exceed 20 percent of the work week. A typical case is Driver v. AppleIllinois, LLC, in which the plaintiffs (restaurant servers) were granted summary judgment because they were required to work at non-related jobs (e.g., general cleaning, such as toilets, urinals, sinks, floors, etc.) while the employer took advantage of the tip credit. (Note: A summary judgment can be made when the court or judge feels strongly that there is no reasonable dispute as to the law and that a reasonable jury would return a verdict for whomever the judgment was in favor of—the plaintiff or defendant.) Additional factors taken into consideration were that the company had a defined policy to take advantage of the tip credit by having employees do work that would otherwise be performed either by employees at minimum wage or higher or by contract workers, that no records were kept of non-tip-producing work by tipped employees and that work on non-tip-producing duties often exceeded 20 percent of their work week.

In an interesting and positive development for restaurant owners, roughly a year ago in Schaefer v. Walker Bros. Enters., Inc., a court granted a summary judgment in favor of the defendants (restaurant owners) and against the plaintiffs (servers at the restaurant) that claimed that they were owed full minimum wage for performing work that is not routinely related to their tip-producing job (e.g., food preparation and back of the house tasks that cooks might normally take care of), and that the restaurant owners did not properly inform wait staff about the use of the tip credit. Servers would perform simple tasks that are incidental/related to tip-producing work like placing ice cream on waffles, adding blueberries to a blueberry compote, brewing iced tea, cleaning hot chocolate and lemonade machines, restocking butters and jams, garnishing plates, and they would occasionally help with maintenance (e.g., polishing brass). The court held the servers’ routine side work was incidental and related to their tip-producing work; that their non-tipped related duties were related to maintenance, were not routinely assigned and only intermittently performed, and therefore were subject to the tip credit; and that the restaurant operators did inform the staff about the use of the tip credit through posters in the restaurant. One could easily see that not allowing minor and rational deviations from the tip credit regulations would place an unreasonable burden on restaurant operators.

Restaurant owners can minimize litigation over tip credit and dual job violations by following these practices:

1. Tip credit notification. Make sure that tipped employees are aware of the tip credit regulations under the FLSA and that they know that you do your best to follow them. Including these policies in an employee handbook is generally acceptable, but to increase one’s credibility in a potential suit, it may be wise to have employees sign a checklist specifying that the policy (and other policies contained in the handbook) was effectively communicated and that they understand it. Optionally, a form that is separate from the handbook (e.g., Tip Credit Agreement) could also be prepared and signed by the employee.

4. Maintain dual job records. Tipped employees that also work in non-tipped jobs for the same employer, such as preparing salads or cleaning the restrooms, should clock in during the time that they perform such jobs so that they may receive wages that are not subject to the tip credit. The exception to this recommendation would be if non-tipped work is only occasionally or intermittently performed (i.e., not routine and not part of a tipped employee’s written side work list).

5. Document work that falls under the 20 percent rule. Some reasonable and logical means of measuring and keeping track of non-tip-producing work that is incidental or closely related to tip-producing activities should be found. If not, the operator will face an increased risk of litigation. The FLSA and Supreme Court rulings conclude it is the employer’s responsibility to record employee wages and hours. In the case of a suit where the employer has not kept accurate records, the employee’s reasonable and approximate inferences (oral or written) of the amount owed will suffice unless the employer has evidence of the precise amount (Source: 328 U.S. 680 and 687).

6. A final recommendation is that when making decisions regarding employee wages, it is important to have the advice of an attorney and accountant with relevant and current experience.

Allen Reich is a professor in the W. A. Franke College of Business, School of Hotel and Restaurant Management at Northern Arizona University in Flagstaff. He has worked in the restaurant industry for almost 50 years as a chef, manager, corporate v.p., consultant and expert witness.