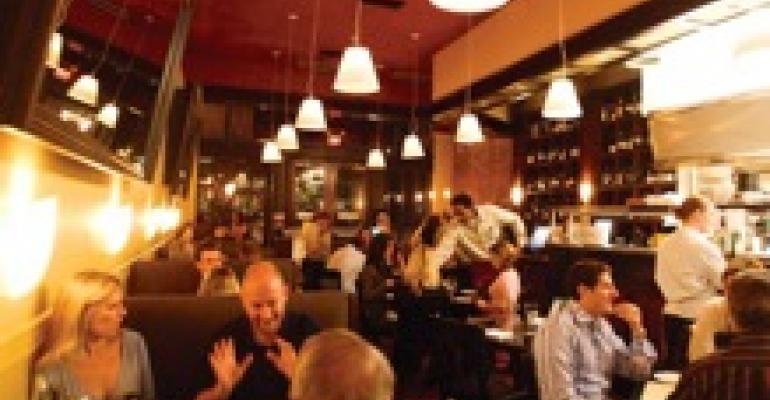 The Theme's The Thing

Having one or two slow nights, week after week? Think about a theme. Themes can accentuate the unusual (oyster festivals) or celebrate the mundane (Wednesday martinis and paninis). Done properly, offering a good value proposition or providing a rare opportunity are both good strategies for increasing customer counts and perhaps exposing your operation to some new patrons.

The menu is also designed to pull in hungry New Yorkers making a night of it in Tribeca and hospitality workers looking for a place to grab a bite after work. So far, so good, says Tracy Nieporent, director of marketing and a partner in Myriad. "It's not the volume you have during prime time, but that time of night tends to peter out, and this has brought in more business."

Carlos' Restaurant in suburban Chicago plans a steady stream of themed events to boost traffic. A no-corkage-fee policy on Monday nights has been a hit. On dinner film club nights, husband-andwife owners Carlos and Debbie Nieto host an evening of French fare and classic flicks. In addition to a set menu, popcorn is served.

Perhaps the biggest gamble, but a fun one for the Nietos, is when they invite small groups (6-8 tops) into their home in Antioch for an afternoon with them and a hands-on cooking class. The group prepares a meal that is served family style with wines and restaurant servers. It's available on Monday, Wednesday and Thursday afternoons and when enough guests request it. It's also become a popular way to celebrate showers. "Basically it's like a party," Debbie says.

Another Chicago restaurant, Adobo Grill, is known for its authentic Mexican cuisine. Adobo chef Freddy Sanchez is burnishing that image with a Mole Festival this fall. For six days, menus will pair six versions of the traditional Oaxacan sauce with meats and fish, including chipotlemarinated pan-seared scallops with a pumpkin seed mole; chicken breast stuffed with plantain sofrito in an ancho chili red mole; and wood oven-roasted pork loin in a fruity manchamanteles mole.

Ola Restaurant in Miami Beach has taken the Latin focus a step further this summer with its "Nuevo Latino Cuisine, a Passport to Summer Dining" program. From May through September, the operation features a monthly menu, drinks and music celebrating the cultures of Mexico, Brazil, Argentina, Spain and Puerto Rico. Three-course fixed menus are priced at $35 per person; each month, wine and spirits makers and local business sponsors have helped underwrite the cost of printing special menus and e-mail promotions. "Travelers" get a stamp for the spotlighted country in a mock passport; at the end of the summer, completed passports can be entered in a drawing for a trip to Puerto Rico.

Executive chef/owner Douglas Rodriguez says the passport idea was the result of a brainstorming session focusing on ways to drive business during South Florida's traditionally slow off-season. By mid-June, he could see it was working. "It's getting the word out and keeping the word out," he observes. He plans to repeat the theme next summer.

A festive atmosphere rules at Kansas City's 40 Sardines, which livens up the place with events throughout the week. Sundays are Live Jazz Nights, Wednesdays the place serves paninis and martinis for $5, Thursdays are BYO wine night—no corkage fee—and Fridays half-priced appetizers are served in the early evening. Each month Lyric Opera Kansas City and a local bank co-sponsor a night of song at the restaurant.

Throughout the year, Atlanta's La Tavola Trattoria offers special menus that focus on a specific region of Italy. This past March La Tavola introduced a La Grassa menu celebrating Bologna and the Emilia-Romagna region (with dishes including fennel salad with pear, celery heart leaves, prosciutto and Parmigiano-Reggiano topped with balsamic vinegar, along with rabbit cacciatora served over soft polenta); an Abbondanza menu focused on South Central Italy.

La Tavola also mounts an annual Tomato Fest at the height of tomato season. The menu includes less-common varieties of tomatoes such as ananas, green zebras and ponderosa pinks; last year they were served with concoctions of pasta, seafood and more. A grilled pork t-bone was paired with grilled apricots, roasted tomatoes and white corn polenta.

Sales see a bump of about 10 percent when La Tavola presents these special menus.

Every Thursday in Boulder, CO, Mateo serves a threecourse Burgundy-tasting menu. The practice accomplishes two things for the popular place: It puts butts in seats on an otherwise-sluggish night, and it introduces a somewhat intimidating varietal to customers who might otherwise be afraid to try it. It's a no-brainer for the restaurant, which has an award-winning wine program. For $42, guests enjoy dinner with four wines, and the sommelier is ready to answer questions about the Burgundies offered. A recent meal included a charcuterie course, followed by chilled local asparagus with eggs Mimosa and aged sherry vinaigrette, grilled leg of Colorado lamb with flageolet legumes, sauce verde and thyme jus and warm pot au chocolat.

In May, diners were asked to decide whether beer or wine is the better food accompaniment at Cork's Beer vs. Wine Dinner. Guests at the Westmont, NJ, contemporary restaurant were served a four-course menu, each course paired with a sampling of both a wine and a beer. Wine representatives and brewery employees provided running commentary on each pairing during the meal. Guests were encouraged to keep score. The $45 dinner included Cabrales Blue with honey roasted Anjou pears, scallop ceviche with crispy shallots and micro cilantro, a spicy Vietnamese-style marinated skirt steak with an Asian chop chop salad and a chocolate tart with cayennespiced walnuts.

El Gaucho in Tacoma lists 27 different martinis on its menu. So it was a natural extension for the restaurant to recently host an evening with four different vodka makers. The producers provided tastings during an informal reception. Guests paid $40 each for the food and beverages.

Food Fight, which operates a number of themed restaurants in the Madison, WI, area, has honed the art of using promotions to generate income. At the company's Johnny Delmonico's concept, for example, no one needsto ask "where's the beef?" because Certified Angus Beef pops up at every turn. Nightly happy hours mix tenderloin sandwiches with specialty martinis and cocktails. A date night prix fixe meal includes an appetizer, soup or salad, steak, sides and dessert. Fresco's, when it opened, promoted a Smallest Steak in the World appetizer (center-cut tenderloin, roasted fingerling potato, sharp cheddar cheese, bacon and creme fraiche) and an entree called Filet Mignon "drug through the garden," which teams the filet with a russet tater tot, herbal salad, tomato black truffle juice and bacon.

Food Fight founder and CEO Monty Schiro says the company's themes bubble up during brainstorming sessions. "Ideas are generated with the notion that nothing is too far over the top," he observes. "Then, of course, we work backwards, throwing out the crazy ones. However, once in awhile, the crazy ones work really well!"

Schiro likes themes because they create excitement for a restaurant or a particular evening—not just for guests, but for the staff as well. "When the ideas are home runs, they give the ‘authors' a shot that inspires them to come up with more," he says. "Overall, a lot of energy and goodwill are generated."