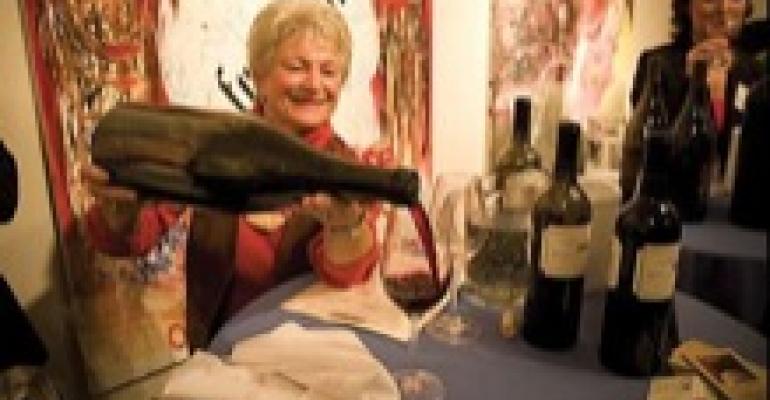 The Magic of Modest Markups

Committed inhabitants of the heartland such as myself enjoy a few benefits, high among them is an extraordinarily low cost of living, which includes, among other things, eminently reasonable prices for wine by the glass at good restaurants. At one of Cleveland's most popular and expensive restaurants, I can't pay more than $12, but if I were feeling the pinch, I could content myself with a $6 pinot grigio.

But go to New York City and wine by the glass can quickly take your check into triple digits. You don't blink at a $14 glass of wine there. To pick a restaurant at random, 11 Madison Park, say, which is comparable in style and price to the Cleveland restaurant, I can order a gamay for eight bucks, OK, and go as high as $26 for a cab, but the majority of the choices are in the $11-$17 range. The rule of thumb is what you pay for a glass is what the restaurant paid for the bottle. That's how restaurants make their margins. And I wasn't complaining, until I sat down at the new Landmarc, which had just opened in the Time Warner Center, an incarnation of the three-yearold Tribeca restaurant.

It was late and I wanted a quick bowl of carbonara and a glass of wine. But they don't do wine by the glass. Their half-bottles are their wine by the glass program. I had a half-bottle of a rioja (Tempranillo 2003) for $14, the same price I'd have paid at most other restaurants for a single glass, and it was perfect. There was enough pasta to warrant the two six-ounce pours I got from the bottle. I knew it hadn't been opened earlier in the week and been sitting around for a while, and I knew that it was the wine that it said it was.

Had I been feeling extravagant, I could have had a half bottle of the 2003 Quintessa Meritage for $63. Or say I was a young chef or serious about learning wines; I might home in a varietal I'd never heard of, the Aligote, a white grape grown in Burgundy. I could well give that a go for $14. These prices are only slightly above retail, not the 300 to 400 percent markup customary at restaurants. With any luck, more restaurants will consider adopting the practice.

"I came up with this craziness," said chef and owner Marc Murphy. "Everybody needs a gimmick, your own little thing. I thought ‘yeah, this'll do it.'"

It is crazy. This is how most restaurants make their costs. I asked Murphy if he knew of other restaurants that had a similar philosophy.

He didn't, and neither did his wine rep, Gabrielle Palay, who works for Frederick Wildman & Sons. "Is it a crazy idea?" she said, repeating my question. "It's a great idea. I don't understand why more people don't do it. They move a lot of wine."

I asked David Lombardo, Landmarc's wine and beverage director, how much they sell, and he said, "Let me put it this way: Our cellar holds 10,000 bottles and I refill it once a month." He put it another way: "Last week I sold ninety-six halfbottles of Sancerre." (2005, Pascal Jolivet and Guy Saget, $16 and $18 respectively.) His list is composed of between 350 and 400 bottles, about 65 of which are half bottles.

Landmarc in Tribeca is thought of as a neighborhood restaurant, and Murphy and Lombardo hoped, as they opened the new place, to develop a solid local clientele in a city jammed with restaurants. "We said, ‘Let's develop loyalty by offering wines at great prices,' at a time when most other New York restaurants were bumping them up," Lombardo said.

Murphy goes through his reasoning this way: "I can sell the Meritage for $300 and I can sell it for $125. I'll make more on the bottle if I sell it for $300. But the thing is, I'm gonna sell six bottles at $125 while the guy next to me is going to sell one. And who's gonna be happier? The six people who drank a great bottle of wine at a great price? Or the guy who paid the standard markup to my competitor next door?" Murphy asked.

Lombardo was more diplomatic: "I don't trash other people's wine programs. I understand they have to make their costs. We just chose to go a different way."

I would love to see more restaurants consider that way as well.