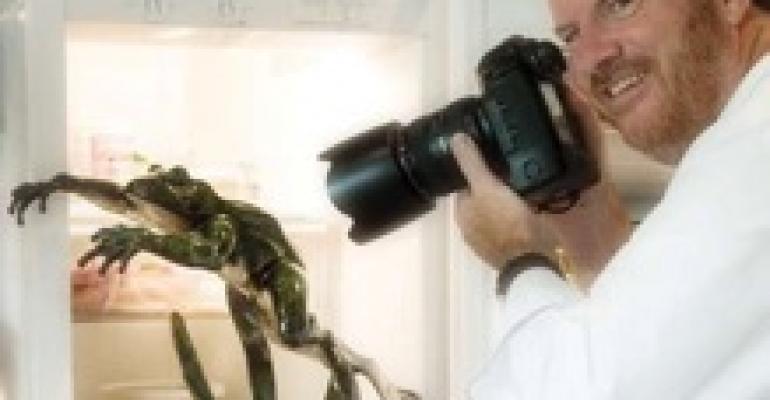 Ready For His Close-up

Before becoming the answer to a culinary trivia question ("Name the first U.S. chef to own his own restaurant in France) by opening Le Monte Cristo in the town of Moneteau in Burgundy, Bob Waggoner had already worked in the kitchens of a galaxy of Michelin-starred French greats: Jacques Lameloise, Charles Barrier, Pierre Gagnaire, Gerard Boyer and Mark Meneau. In all, the California native spent 11 years in France before returning to the U.S., where for the last 10 years he has been the executive chef at Charleston Grill, a four-diamond restaurant located in the Charleston Place Hotel in Charleston, SC. The cuisine there blends Lowcountry cooking with his French-influenced techniques. "This is the most ostentatiously formal and pleasing restaurant in Charleston, with superb service, grand food, and an impeccably trained staff," says the New York Times. Of the restaurant's recent makeover, Charleston City Paper declares that "Waggoner's food has redefined itself in multiple geographies, and this is its genius."

You're holding that camera like a pro.
Photography is a long-time hobby of mine. I just finished taking all the pictures for my new cookbook.

Did the publishing company pay extra for the work?
They did. I took the money and put it in a 529 plan to help pay for my daughter's college tuition. She's 14, so we're going to need it in a few more years.

Ever sell your photos before?
Sure. Four different stores in town stock my 24- x 36-inch images—mostly Charleston scenes. I've got some 40- x 60inch shots hanging in the casual restaurant at the hotel, too.

Sounds like a good way to help pay for an expensive hobby.
It is, although I found out in an audit last year that the IRS gets suspicious when a chef takes big write-offs for photo gear.

Uh-oh.
It went OK. I could show income, so I came out clean.

This fishing equipment looks impressive, too.
Fishing has been up there for me since I was a kid in California. It's just so relaxing.

That a deep sea rod and reel?

It is, but I stick close to the harbor. There's nothing like the open ocean, but I can get a little queasy when I can't see the shore.

We see the makings of a nice fish soup in your refrigerator.
Most of that is left over from a sendoff party for my wife and daughter.

Where'd they go?
To France. They go for two months every summer. Christine, my wife, is from there and our daughter Joyce was born there. They do the family thing.

So you're going solo right now.
Temporarily. I'll catch up with them for three weeks later.

Who makes the meals when the family's together at home?
My wife. She's a great cook. I do the mise en place, though, because I'm just faster.

Tell us some favorite dishes.
We love the French classics. Blanquette de veau, beef Burgundy, rabbit. We do raclette parties. A lot of it goes better in the winter when it's cooler here.

What attracted you to Charleston Place 10 years ago?
I'd done the hotel thing before, which to me meant a lot of walking around with a clipboard and going to meetings. The restaurant was big for my style of cooking—130 seats—but they gave me everything I asked for.

And today?
It's one big happy food fest now. We bring in the best products, and all we really have to do then is make people happy.

PHOTOGRAPHY: I. WILSON BAKER/REDUX PLUS