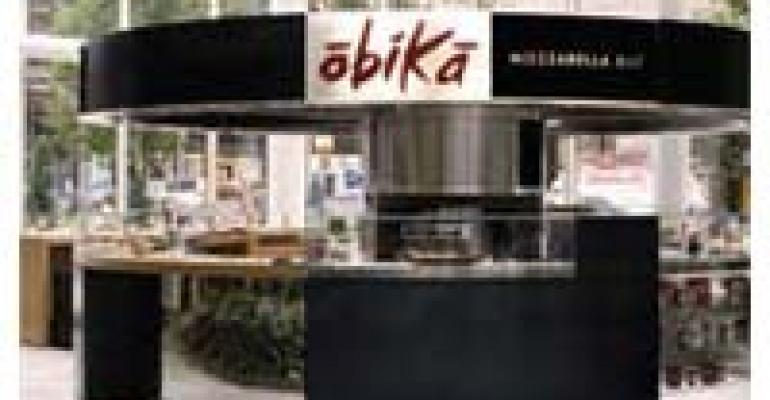 Concepts of Tomorrow: Much Ado About Mozzarella

Fresh mozzarella is nothing new, but building a restaurant concept around it — well, that's a novelty. Nancy Silverton, Mario Batali and Joe Bastianich hinted at the idea when they planted a mozzarella bar at the center of Osteria Mozza's dining room in Los Angeles a couple of years ago. But it wasn't until late in 2008 that an Italian chain of mozzarella bars brought its narrowly focused vision to this country with the opening of the first Obikà in New York City.

Obikà is the brainchild of Silvio Ursini, an executive at Bulgari, known mainly for jewelry and luxury gift items. He took his inspiration from his local salumeria in Naples, which can barely keep up with demand, and a trip to Japan, where he was impressed with the style and care used to prepare and present sushi.

The result is a hybrid, a chic Asian-inspired space with a minimalist look but a decidedly Italian menu. The original design by Labics, an Italian architectural firm, was adapted to the New York space by American consultants. The interior combines light wood, steel and glass surfaces for a contemporary flair. Patrons sit at a communal table or perch at the counter on stools, where they can watch their meals prepared; clear containers display pillows of mozzarella and marinated vegetables in place of raw fish. The name, Obikà (loosely translated, Neopolitan for “here it is”), has a vaguely Asian style. And cooking, as in a sushi bar, is minimal.

The original Obikà, inspiration for other knockoffs, opened in Rome in 2004; today, there are seven in Italy, two in London and units in Kuwait and Tokyo. Anthony and James Fauci, partners at Innovative Hospitality Concepts, are the eastern U.S. master developers who worked with restaurateur Reto Cantone to open the first U.S. unit. They want to grow to at least 20 locations over the next decade.

When Anthony Fauci decided to develop an Obikà, he made a few tweaks to accommodate the American market. Probably the biggest point of departure is the layout, which is more compact and self-contained than its older cousins in Europe and Asia. The New York Obikà is really more of a kiosk, located inside a popular sculpture garden, a glass-enclosed public gallery on Madison Avenue on the site of the former IBM building. Instead of 90 to 120 seats, this location can accommodate up to 34 guests, but the atrium contains 100 public seats that many Obikà patrons occupy.

The menu also reflects American tastes and the realities of a strong Euro. The original Obikàs stick to the classic mozzarella from Paestum in Italy's Campania region, which has a Protected Designation of Origin cachet — and price tag to match. But this location is mixing it up with an American knockoff, Bufala di Vermont. Two versions of the Italian product (smoked and regular) are offered on an $18 tasting plate with the domestic version. One item, nduja, a spicy, spreadable salami, can't be imported into the U.S. legally, so a California producer was found. And wild salmon from Alaska appears on the menu here. “As long as it works with the concept, they'll let us do it,” Fauci says.

Fauci was drawn to Obikà because it's not chef-driven, which means it can operate in a smaller footprint. “You don't need large spaces for heavy gas grills and ovens and the supplementary systems needed for them,” he says.

Open from 7 a.m. to 6 p.m. daily, the kiosk is tailored to the breakfast, lunch and small bites business; on weekends, Obikà serves Italian brunch. The menu is divided into six sections: tasting (small portions of different mozzarella varieties); breads; salads; primi piatti (soups, pastas), desserts; and beverages such as espresso, teas and fresh juices. Breakfast choices include pastries (brought in from a popular local bakery), panini and croissant-style sandwiches, juices and fruits, yogurt and coffee drinks. The Italian Brunch is a buffet with all the menu selections.

Because it is an ingredient-centric concept, attention to quality is paramount. Many of the ingredients — from mozzarellas, bottarga from Sardinia, porchetta from Tuscany, fig marmalade, prosciutto crudo, mortadella from Bologna, caponata from Sicily — are flown in three times a week, while specialties such as burrata and stracciatella are brought in weekly.

The main target for this new concept, at least in New York, has been office workers on their way to work or breaking for lunch who are looking for something fun and stylish. The IBM Atrium is located amid a sea of corporate offices, so traffic is never a problem. In a place where everyone wants what they want, in a New York minute — keeping guests happy, however, can be tough.

“We work to get the staff to understand that people don't have a lot of time, and they want value for their dollar. It was a big challenge to fine tune that and get it done right,” Fauci says. Besides boning up on product information, staff learns how to walk the fine line between providing good service and not rushing customers.

“I had a hedge fund manager who said ‘I love your food; if you can guarantee I'll get out of here in 32 minutes, I'll come in with my office regularly,’” he recalls. “They come in every week.” On weekends, tourists have been filling the seats occupied by office workers during the week. “We are a major draw for tourists, especially Europeans,” Fauci says.

Trying to turn out any kind of volume from a cramped kitchen has been a test as well. “We really get slammed between 11 and 2:30,” Fauci says. One tweak that helped was shifting the espresso machine over eight inches to ease the traffic.

From the one location, Fauci plans to branch out first in New York and then to other major metropolitan areas. “The idea is to get a foothold in Manhattan and get a buzz going,” Fauci says. IHC has leases on three additional New York spaces and expect to open as many as five Obikàs in the city. Fauci says he also is scouting out locations in Miami, Philadelphia, Washington DC, Boston and Chicago.

Fauci is considering freestanding locations as well as upscale malls and airports as logical destinations for the kiosk design. But as a restaurant and hotel developer, he understands that malls and airports carry some risks. “The problem is this: We have seriously high standards when it comes to our products. When you get into malls and airports, there is a control issue. You lose a lot of control. That's something we have to be conscious of,” he adds.

Right now, at least in the U.S., Obikà has the field all to itself.