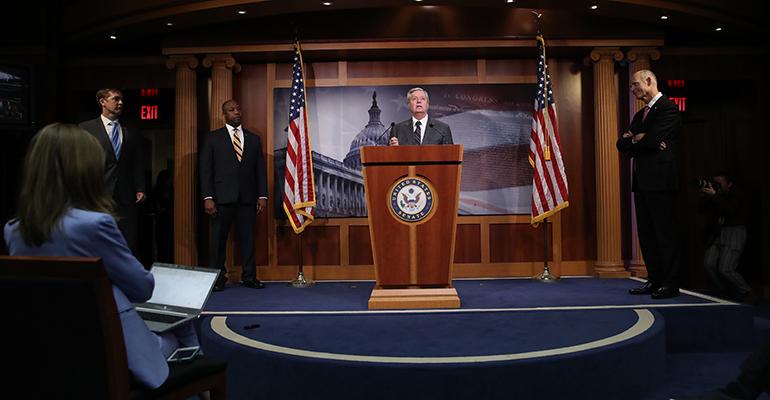 Win McNamee / Staff / Getty Images News
States would get $400 million in election assistance for 2020 voting amid the coronavirus pandemic.
Operations>Legal

Restaurants, other businesses among provisions in COVID-19 response

The U.S. Senate and the Trump administration have negotiated a $2 trillion stimulus package with the aim of helping citizens and businesses deal with the coronavirus pandemic’s impact.

The Senate approved the bill late Wednesday in a 96-0 vote. It still requires approval of the U.S. House, which is likely to come Friday, as well as President Donald Trump’s signature.

“We are still reviewing the draft text of the agreement, but it is clear that Congress is really trying to keep restaurants operating. The bipartisan agreement looks to be a strong step forward, and we applaud the ongoing efforts of the administration and Congress,” said Sean Kennedy, the National Restaurant Association’s executive vice president of public affairs, in a statement earlier Wednesday.

The restaurant industry has been deeply challenged as it has struggled amid the state and city restrictions to help stem the spread of the COVID-19 virus.

The $2 trillion bill, which follows other coronavirus economic relief measures passed earlier, includes these provisions, as outlined by Bloomberg:

Large Businesses: About $500 billion can be used to back loans and assistance to companies, as well as state and local governments.

Individual checks: Direct payments to lower- and middle-income Americans of $1,200 for each adult, as well as $500 for each child. Sen. Chuck Schumer (D.-N.Y.), the Senate minority leader, said checks would be cut April 6.

Restricted Business Aid: Any company receiving a government loan would be subject to a ban on stock buybacks through the term of the loan plus one added year. Recipients would also have to limit executive bonuses and take steps to protect workers.

Hospitals: About $150 billion for hospitals and other health-care providers for equipment and supplies.

Oversight: The Treasury Department would have to disclose the terms of loans or other aid to companies, and a new Treasury inspector general would oversee the lending program.

Trump-Business Exemption: The bill would bar any business owned by President Trump or his family from getting loans from Treasury. Businesses owned by members of Congress, heads of executive departments and Vice President Mike Pence also would be blocked.

Elections: States would get $400 million in election assistance for 2020 voting amid the coronavirus pandemic, allowing them to increase the ability to vote by mail, expand early voting and online registration.

Update March 26, 2010: This story was edited to reflect Senate passage of the legislation late Wednesday night.