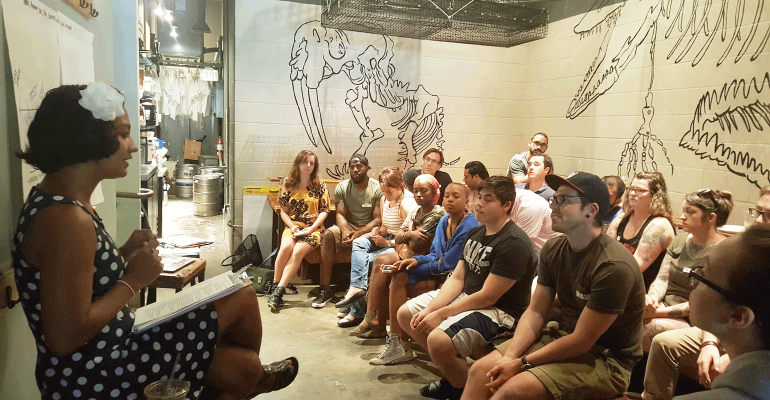 Efforts to enlist bar and restaurant employees to help prevent sexual harassment and assault are gaining momentum around the country.

Training programs such as those administered by Washington, D.C.-based Safe Bars are teaching workers how to recognize and intervene in situations where a patron — or employee — may be in danger of being victimized.

“Alcohol is the No. 1 date rape drug, so we have the responsibility to combat this when we see it in our establishments, and to educate people in the bar and restaurant industry about seeing the signs and learning how to intervene,” said Stacey Wright, co-founder of Bartenders Against Sexual Assault (BASA), which supports Safe Bars training.

Research from the National Institute on Alcohol Abuse and Alcoholism has found that about half of sexual assaults involve alcohol use, either by the victim or perpetrator, or both.

BASA is seeking to raise awareness around the issue and establish a national training program to enlist bar and restaurant employees in the effort to create safer environments.

Lauren Paylor was an assistant general manager and head bartender at Drink Co., which operates four bars and restaurants in Washington, D.C., when she went through the Safe Bars training program last year, along with several coworkers. The training sessions are two hours long, and intensive

As a bartender, she said, she’d been taught to pay attention to her surroundings and how much alcohol her guests were consuming, but the Safe Bars training added another dimension to her awareness.

“This training reinforces that you play a vital role in the things that occur in your establishment, and that you are an important piece of the puzzle,” said Paylor, who now works for Kimpton Hotels & Restaurants. “It helps you see what steps you can take when you encounter these very uncomfortable situations.”

The two-hour Safe Bars training includes some background information about sexual aggression and sexual assault, and the role that alcohol plays in these behaviors. Sessions include interactive discussions about how best to handle situations in which a potential perpetrator, usually a man, is making unwanted advances on a potential victim, usually a woman.

“Our trainings are very participatory and experiential,” said Lauren Taylor, who runs the original Safe Bars training program in Washington, D.C. “We don’t come in and wag our fingers at people and tell them what to do. Rather, we elicit what it is that they already do, and then we build on that.”

Opening up communication around the topic is one of the main objectives, she said. Once the staff begin discussing how they have handled these types of situations and seen them handled by others, the Safe Bars trainers can make suggestions for the best ways to step in and help.

“We talk about how to recognize that someone is not into something, and we share a framework for intervening,” Taylor said.

Taking hospitality to the next level

Jamie Leeds, chef/owner of Hank’s Oyster Bar and other venues in Washington, D.C., said she decided to implement the training at her restaurants after some bartenders created an “anti-Valentine’s Day” cocktail menu that was insensitive toward domestic violence.

“Safe Bars reached out to us, and we asked if they would present their workshop for our team,” Leeds said.

She had all of the bartenders, bar managers and general managers attend. Managers were expected to disseminate the information to the rest of the staff.

“This was a great learning opportunity for our staff to take the idea of hospitality to the next level — that great service is more than a smile or quick cocktails. It’s about reading the needs and wants of our guests by being aware of any signs of distress and offering the support needed,” Leeds said.

She said she would recommend the training to other restaurant and bar owners.

“Our team walked away educated, empowered and with a deeper level of what hospitality means,” she said. “It was a great experience for us.”

One of the biggest takeaways for workers who go through the training, according to Taylor of Safe Bars, is the fact that most instances of sexual assault are committed by someone whom the victim knows. Studies suggest this is the case in 75 percent to 90 percent of sexual assaults, she said.

“One of the things that people who have gone through our training say is that they’ve been watching for the ‘pickup’ guy,” Taylor said, “but now they are watching the couples and the people who come in with friends as well.” Wright of BASA likened the growing movement to the early days of teaching the industry about preventing drinking and driving.

“It’s not just that we’re looking at preventing and intervening in these situations,” Wright said. “We are looking at changing the culture, and that’s not an easy undertaking. We need to get people to understand that this is a really deep, wide, pervasive issue, and that a lot of it stems from attitudes toward women — that some men feel entitled to harass women in bars.”

More restaurants and bars are recognizing the need for staff to be aware of sexual harassment and potential sexual assault.

At Twelve Mile Limit in New Orleans, signs in both the men’s and women’s restrooms tell patrons to alert a bartender or manager if they feel unsafe or or uncomfortable, or if they witness such a situation. “Even if we’re busy — we want to know,” the sign says.

T. Cole Newton, the owner of Twelve Mile Limit, penned a column on the subject of harassment for the Tales of the Cocktail website last year, in which he detailed strategies for intervention. They included watching for signs of unwanted advances, intervening before being asked for help, and informing other staff, including managers and bouncers, of any such situations.

Sexual harassment in a foodservice establishment can be a legal liability for restaurant and bar owners, especially when it involves staff who make unwanted advances on other staff.

Wright said part of BASA’s mission is to address staff-on-staff harassment, as well as harassment that involves patrons.

“You can’t very well prevent it from happening to your patrons if there’s an underlying attitude [of tolerance] in your establishment,” she said. “If people are being harassed in the back of the house, it’s really hard to stand in the front of the house, and say, ‘We won’t stand for this.’”