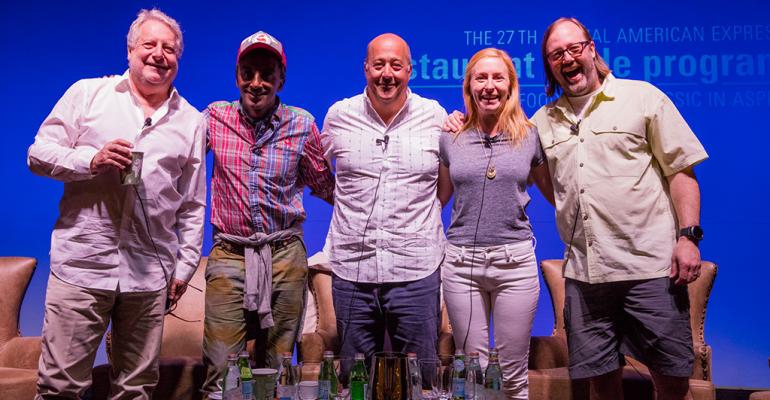 Why mentoring is crucial to hospitality industry

Zimmern: Mentorship has played a big part in the restaurant industry. It’s best described by a quote from Benjamin Franklin: “Tell me and I may forget. Involve me and I might learn.” It describes what we do in this industry.

Waxman (chef/owner of Barbuto and Jams): For a mentor/mentee relationship, you have to have passion in common. There’s an old adage that a teacher is only as good as the student. If a student doesn’t have anything going on, what’s a teacher going to do? In our world, it’s a chef’s role to elicit whatever passion you have inside yourself. It’s a mentor’s job to help one believe in themselves and find their passion. Marcus (a mentee to Waxman) is more curious than anybody I know.

Zimmern: Marcus, do you remember your first contact with Jonathan?

Samuelsson (chef/owner of Red Rooster and Ginny’s Supper Club in Harlem): Yes. We were at a party in the mid ’90s and all the chefs there went to Jonathan. I had never met him. But we met later and I have always sought out his advice. It never starts as a business thing, but ends up there and he passes along advice that he’s gathered from his time in California and all these years later. All trends start someplace, somewhere and Jonathan has lived through and seen so much of what has happened in our world.

Zimmern: What do you tell people who are afraid to ask for help? From my standpoint, I’ve crossed paths with a lot of people who see that as a sign of weakness, while I see it as a sign of strength.

Samuelsson: I’ve worked with older people and watched them. Some of them went to Paris to work and got paid and I wanted to know how I could do what they’ve done, so I asked. I’ve always had mentors who helped open the door for me.

Zimmern: Mentorship is a necessary part of development. Chefs want to know they are part of some family tree. Wiley, where did you and Christina first meet?

Dufresne (chef/owner of the now-closed WD-50 and Alder): It was in the basement of a restaurant I used to own. I make a point of saying hello to everyone when I get to work. In a restaurant it takes an army, and that army is working on my behalf. It isn’t unusual to have new people working in a kitchen and there was Christina with a bandana in her hair. She was the only person in the pastry kitchen at the time. She worked at Bouley but would comes to WD-50  a couple times a week to help out. It was the start of a great relationship. Ultimately we brought her on board.

Tosi (chef/owner of Milk Bar in New York, Toronto and Washington, DC): I remember that day well because when you meet the chef of a restaurant you’re dying to be part of its super nerve racking. I was a cook at Bouley (a French restaurant owned by David Bouley) at the time, but I like working at restaurants that are understaffed because it leaves you so much room to gain experience. WD was so different from Bouley and I wanted to gain experience from different types of restaurants. But before I began showing up there, I saved up and ate at the restaurant and during one of the courses Wylie came up to my table and asked me what I thought. It was the first time anyone asked me for my opinion about their food. I thought that was cool. And once I was there working, he taught me how to think about food. He taught me how to have an opinion about food. I made a chocolate cookie for a family meal and he would grill me. Do you think this is good? Could you make it better? What would you do differently? He taught me that there is no such thing as perfect.

Zimmern: Is learning to think on your own something you can relate to as you were coming up?

Dufresne: I am annoyingly curious. My parents encouraged me to be curious. That is a good thing and a part of learning. You should learn how to chop an onion, but you should also learn how to think. When someone asks me what I want my legacy to be, all I really want is that when you either work or eat at one of my restaurants I want you to think. It’s important for a cook to think about the many tasks they do, that they wonder and are curious while they’re learning. I have always made a point of walking around and asking people for their input.

Zimmern: When you built WD (a pioneer of molecular gastronomy), were you consciously thinking about teaching those with you to unlock the creative piece of themselves?

Dufresne: The sole reason we built the restaurant was to continue our culinary education as cooks, while diners could continue their culinary education. Where everybody could learn. Our industry is about culinary education all the time. There is no single person responsible for all the creativity. It’s always been about surrounding myself with people who could help us make a better experience.

Zimmern: What mentor taught you that philosophy?

Dufresne: I owe a lot to Jean-Georges (Vongerichten) and his thought process and his thinking about food. He’s a very cerebral chef. I stayed with him as long as I could (at his New York City restaurant Jean-Georges). He was an inspiration.

Tosi: The thing I learned from Wylie was how to build a family, how to build a team. Learning how to be a member of it and not just a leader of it. And, also, learning when to be a leader and when to be just a member. I learned from Wylie that when I’m creating, I ask myself if what I’m making is the best possible thing I can make or, even, does the world need what I’m making?

Zimmern: Jonathan, everyone is coming to you for advice for everything. How do you allocate your time?

Waxman (the 2016 James Beard Award Winner for Best Chef New York City): At the end of the day, you have to wait on people to see if they will take your mentorship or if they will come to you seeking it. I love the ones who are so shy and they say, “Chef, can I talk to you?” I love helping them. I love seeing people grow. And it’s sad when I see someone stumble, but that’s when I come in and help. As chefs we’re good at making food, but we’re bad at business. The hardest thing to do in this business is make money. I’m 65 and I can’t retire because I have no money in the bank. Isn’t that stupid? But finally I’ve learned to make some money.

Zimmern: Marcus, over the last six years you put every chip you had in the middle of the table and you bet on black, no pun intended. But by moving to Harlem, you helped transform a community, you transformed your life and you transformed how you look at food. But more importantly, you opened up as a human being. This expression of yourself right now is the best I’ve seen since I’ve known you.

Samuelsson: As a chef you’ve got to know yourself. I feel like I’m just getting to that point. I have lived through a lot of experiences. Success came early to me when I was 20, 24 but I believed that I wouldn’t really become the chef I’m meant to be until I am 50. I’ve been fortunate to know people who came up before me and helped me along the way.