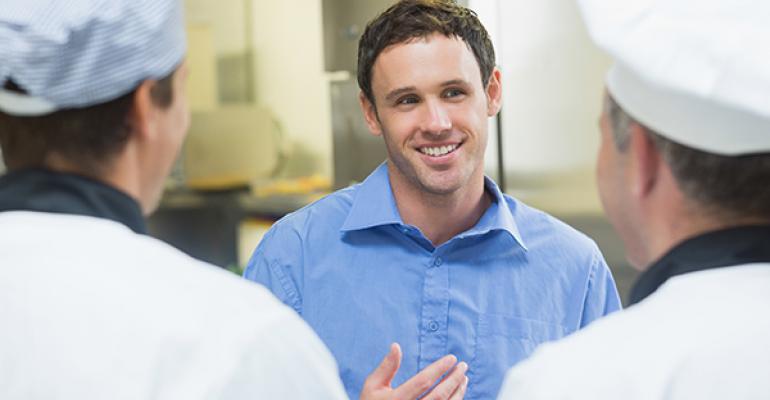 The long-term effect of the $15-per-hour minimum wage push for hourly workers has many operators duly concerned.  But they also will have to rethink how they pay their salaried workers when the U.S. Department of Labor issues new rules that govern overtime pay later this year. One effect: employees now categorized as midlevel managers could cost restaurants more, and they may no longer be allowed to perform routine non-supervisory duties as they currently do.

The DOL cites wage equity as the impetus behind this change.

"The assistant manager at a fast food restaurant who puts in 60-70 hours a week for $455 and spends almost all of their time performing the same work as the employees they supervise and who does not get overtime is getting a raw deal,” says Labor Secretary Tom Perez. "We are updating the rule to prevent this situation."

The DOL promises to release the new rules, already overdue, shortly.  The holdup likely involves the dollar amount that will become the overtime threshold. President Barack Obama wants the DOL to raise it significantly.

“Unfortunately, today, millions of Americans aren’t getting the extra pay they deserve,” President Obama says. “That’s because an exception that was originally meant for high-paid, white-collar employees now covers workers earning as little as $23,660 a year. So if you’re making $23,000, typically, you’re not high in management. If your salary is even a dollar above the current threshold, you may not be guaranteed overtime. It doesn't matter if what you do is mostly physical work like stocking shelves, it doesn't matter if you’re working 50 or 60 or 70 hours a week—your employer doesn't have to pay you a single extra dime.”

Bringing the overtime threshold up to date sounds like a reasonable idea. But a 30-page study conducted by Oxford Economics for the National Retail Federation (NRF) sees trouble ahead for employers. New rules would do a lot more than boost the pay for a few employees.

Here’s what the report found:

“The overtime threshold, currently set at $455 per week, today exempts an estimated 3.3 million retail and restaurant workers from overtime pay. Middle managers in these occupations often work 50-hour weeks and receive bonuses and other incentive pay. Many employers have created their current business and employment strategies based on the current threshold regulation.

“While it remains uncertain what sort of regulatory changes the Department of Labor may propose, an increase of the overtime threshold is likely to cause significant complications for business owners and create a series of unintended consequences, both legal and regulatory, that are likely to cost workers. In theory, raising the overtime threshold to $984 per week would make as many as 2.2 million workers—or some two-thirds of the total current workforce in retail and restaurant trades—eligible for overtime pay (and boost employers’ labor expenses by an estimated $9.5 billion annually). But it is highly unlikely that employers would simply pay the additional wages without making significant adjustments in the structure of their workplaces.

“These adjustments would potentially lead to a ‘hollowing out’ of the employment structure, creating a more hierarchical workplace; a rise in the use of part-time, entry-level workers as the hours of full-time workers are cut; a reduction in job-advancement opportunities for hourly workers who aspire to management ranks; and a fundamental increase in inequality within the labor force. They are also likely to boost the overall costs of doing business.”

The National Restaurant Association sees trouble ahead, too.

“‘We won’t get a sense of the precise impact until the proposal is released, but we are very concerned that the DOL will take an entire class of restaurant managers and re-define them as hourly employees,” says Angelo Amador, the association’s v.p. of labor and workforce policy.

The NRA sees these issues on the horizon:

• Managers could lose pay. If the DOL’s criteria no longer align with the duties restaurant managers typically perform, many will likely be paid on an hourly rather than salaried basis. That could mean lower pay, even with overtime.

• Incentives could disappear. Many restaurant managers and executives start their careers in nonmanagerial positions and move up to managerial jobs with new, performance-based incentives. A shift back to hourly pay for managers will remove an incentive for other employees to become managers, and make it harder for restaurants to move people up.

• Flexibility will be lost. Under current rules, as long as an employee’s primary duty is management, a manager has the flexibility to occasionally pitch in on duties traditionally performed by nonmanagerial employees, like preparing food or operating a cash register, depending on the restaurant’s needs at the time. Bureaucratic, inflexible rules on managerial duties could mean managers lose that ability. (See the current rules.)

New overtime rules could be both costly and problematic for operators. But low-level to midlevel restaurant workers who want to advance in the industry may be dealt the biggest blow. The NRF surveyed current managers about how they think the new overtime rules will impact their jobs.

• Nearly half (45 percent) of respondents said the changes would make them feel as though they are performing a job instead of pursuing a career.

• Under the new regulations, 41 percent of managers believe they would be paid less, since hourly employees are not eligible for bonuses. Turnover among hourly restaurant workers is already notoriously high. The unintended effects of the new overtime threshold rules could cause turnover rates for many managers to approach those levels, too. Most operators want more stability among their workforce, not less. Let’s hope DOL is very, very careful when writing the new overtime threshold rules.