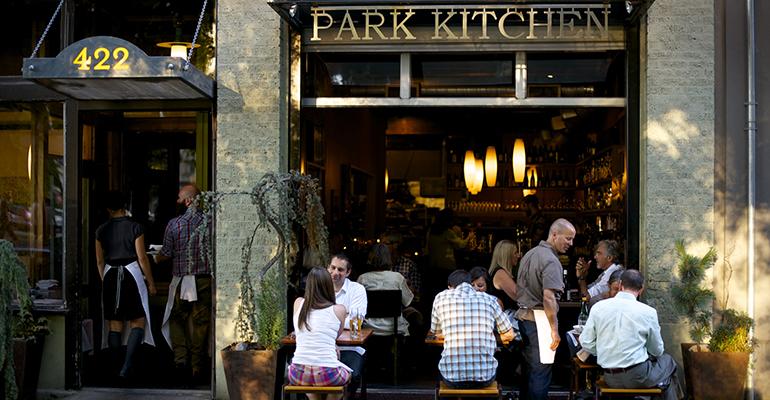 The no-tipping movement is catching on in Portland, OR, with a group of restaurateurs planning to use of a “gratuity-free” logo developed in New York and growing in popularity.

Multi-concept operator Andrew Tarlow in New York first debuted the gratuity-free logo for his restaurants, which include Roman’s, Diner and Marlow & Sons. His logo is open source with the hope that other restaurants will use it to communicate better to customers the hospitality-included positioning.

Among the restaurants in Portland announcing plans to use the logo and go gratuity free are Park Kitchen, The Bent Brick, Farm Spirit, Le Pigeon, Navarre and Luce.

Some of those restaurants, however, have gone a step beyond gratuity free, also moving to a “one-house” service model that blends back-of-the-house roles with front-of-the-house to further eliminate disparities in pay.

One of those operators in Portland is Scott Dolich, owner of Park Kitchen and The Bent Brick, who plans to complete the gratuity-free transition in both of his restaurants in July.

The move to the one-house model began months ago, after managers expressed concern about server compensation. Most were part-time, Dolich said, working from around 5 p.m. to 9:30 p.m. And though they would make as much as $40 per hour in tips, the restaurants couldn’t give them enough hours to make it sustainable.

Dolich wanted to be able to offer servers full-time work. So he started training servers to help in the kitchen, doing prep and line cooking, allowing them to add more hours to their schedules. Cooks, meanwhile, were also trained in service and bartending, allowing cooks and servers to rotate their roles.

“We’ve been doing that for a long time. Our chefs and sous chefs act as food runners every night, so that wasn’t that big a stretch,” Dolich says. “Initially there was a lot of chatter about ‘cooks are cooks’ and ‘servers are servers.’ But in the end we found that was bullshit.”

The move allowed the restaurants to attract professionals interested in learning all aspects of the business and who were better equipped to speak knowledgeably about the menu, he notes.

It will also improve turnover rates, he contends. “As long as they’re learning a new position, they will stay longer.”

Other positions would remain unchanged, including the floor manager, chef and sous chef, bar manager and porters.

To better compensate both sides, however, Dolich decided to go gratuity free. Menu prices will increase 18 percent, roughly the amount guests would add on as a tip, and pay rates will also increase.

In a few weeks, the starting salary for the cook/server position will increase to $15 per hour. Currently, cooks start at around $11-$13, and servers and bartenders receive the minimum wage of $9.25 with tips.

The move will also allow all employees to work full time, so everyone will get healthcare coverage, Dolich explains. Previously, cooks and managers had healthcare benefits, but servers typically didn’t because they didn’t work enough hours.

Under the new model, servers will earn roughly the same on an annualized basis, Dolich says. But they will have a steady pay rate, and not be vulnerable during slower seasons when fewer guests result in less in the way of tips.

With Oregon’s minimum wage scheduled to increase slowly to $14.75 by 2020, higher wages were inevitable. But Dolich argues there was no way the small restaurant could match a $40 per hour rate made on average by servers collecting tips.

“Personally, I’ve never liked the notion of tips,” he adds. “It has always been the most awkward aspect of dining, this aspect of servitude.”

With employees as an independent restaurant’s greatest asset—and expense—Dolich predicts attempts to address restaurant pay and profitability will turn the industry on its ear.

“I think restaurants will change more in the next two years than in the last 40, because of all of these issues,” he said. “Restaurants are going to have to come up with a lot of different models that work.”

But Dolich adds that his restaurants are small, with only 11 employees between the two locations.

“This may not work for everybody,” he admitted. “We’re small. We’re a little higher-end. Our customers are well-traveled and know a lot about food and they’ve seen models like this in Europe, Japan and China.”

Dolich says he hopes more restaurants will adopt use of the gratuity-free logo, but, in the end, “our biggest advocates will be our employees. We want our staff to be able to say truthfully that they’re being taken care of.”