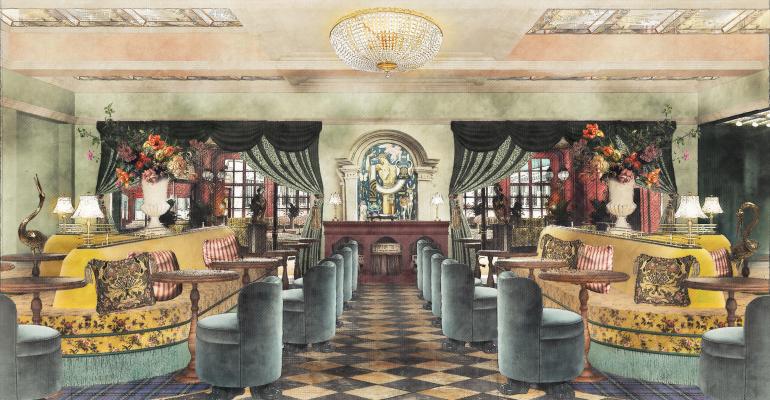 The 1940s property is getting a retro diner, vintage bowling alley, fine-dining restaurant and four other food and beverage concepts

The Consortium Holdings group is behind more than a dozen popular restaurants and bars in San Diego including Born & Raised, Ironside Fish & Oyster, Seneca, and Polite Provisions. Now they’re taking on their most ambitious project yet, with the purchase and forthcoming restoration of the historic Lafayette Hotel & Swim Club, which will include seven new food and beverage concepts.

The Lafayette closed to the public on Oct. 1 to undergo a $26 million restoration and transformation. It’s slated for a May 2023 debut.

This Colonial-style property opened in 1946 in San Diego’s North Park neighborhood. In its heyday, the Lafayette was a destination for the elite of Hollywood’s golden age, frequented by stars like Ava Gardner, Lana Turner, and Bob Hope. Consortium Holdings wants to honor the hotel’s glamorous past while creating a new hub that appeals to visitors and locals alike.

“We like environments that are independently operated and designed, so you can feel the heart and soul of the people behind the project,” CH founder Arsalun Tafazoli told Restaurant Hospitality. “We want to bring the property back to what it was built for, as a destination social and entertainment hub for the citizens of San Diego and those who visit. Hotels seem like a natural progression for us, as I feel food and beverage is always the quintessence of a great hotel.”

Brooklyn-based Post Company is leading the redesign of the 141-room property. They tease an aesthetic that blends the eclectic affluence of Charles Dickens’ Miss Havisham with attainable style, and they’ll touch everything from the lobby to the linens.

The lobby bar is inspired by the classic lobbies of Europe’s grand hotels, which once contributed to the social fabric of their cities.

“Somewhere in the ’50s, ’60s and ’70s, big corporations came in and built hotels where you could check in at any place in the world and be in the same environment,” said Tafazoli. “At that time, hotels took on less of a social role, and we want to go back to those roots.”

In addition to the lobby bar, CH will create seven distinct concepts. Beginners Diner is a 24-hour historical recreation of a 1940s Worcester lunch car. The Gutter is a vintage bowling alley, cocktail bar and game room inspired by Henry Frick’s personal bowling alley at the base of the Frick Collection art museum in New York. Mama Intento is a Mexican-influenced restaurant and agave bar serving mezcal and tequila. Faux Pas will channel early 20th century hotel fine dining restaurants by focusing on table service carts with carved-to-order prime rib and ice-cold martinis. The Pool Bar is inspired by Slim Aarons’ iconic sun-drenched photography. Mississippi Room is a rum bar, and Chef’s Table will feature a rotating list of guest chef events.

As Consortium Holdings gets ready to open its first hotel project, Tafazoli said they’re entering the process with humble trepidation, but that they are excited to put their stamp on the hotel industry. And for now, the Lafayette Hotel & Swim Club will operate independently of a corporate flag.

“This is an aspirational project. As the world becomes more corporatized, we yearn for more individual places.”