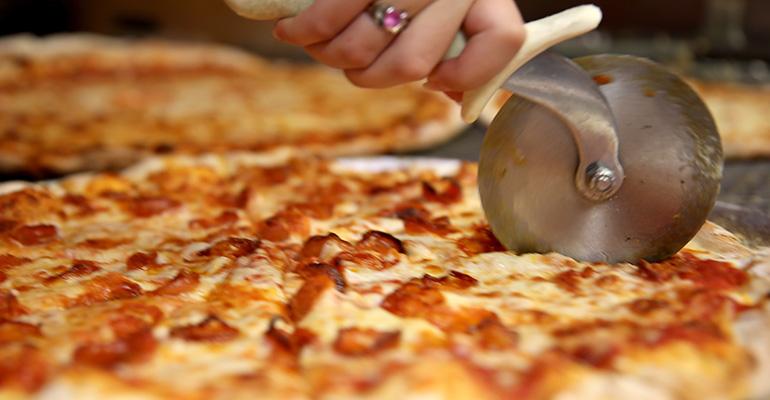 <p>Good news for pizza sellers: The price of cheese is expected to drop six percent this year.</p>
Food & Drink>Food Trends

Good news for operators who have dealt with surging costs for animal proteins and other key commodities during the last two years. A midyear outlook sees wholesale food prices, already down 2.9 percent through April, remaining steady or perhaps declining through the rest of 2016. Even pricey seafood items, including shrimp and lobster, could be bargains now.

Denver-based supply chain management firm SpenDifference is doubling down on the rosy forecast Restaurant Hospitality reported on four months ago. Here’s what the company is saying now.

“This is a tremendous year for commodity purchases,” says SpenDifferrence v.p. DeWayne Dove. “Prices for beef, pork and poultry are all at levels where restaurant chains can add protein offerings at lower menu prices to generate more traffic.” He notes that chains are stocking up on certain items to fuel limited-time promotions and that the outlook is so favorable some chains have made permanent menu additions.

Price points for some seafood items look good, too. SpenDifference seafood guru Andy Beaty reports that shrimp prices, which peaked at $7 per pound for medium-sized peeled and deveined product, have fallen to roughly $4.25 per pound.

“This is the time to stock up for year-end holiday menus and promotions geared to college football playoffs and the Super Bowl,” Beaty says. “Prices could begin to rise after summer when supply falls.” Cod and pollock prices have become operator-friendly too, he adds.

Even lobster prices could give operators a break this summer.

“Prices vary around the country, but the arrival of New England's lobsters will likely lower prices nationwide,” the Associated Press reported last week. “Prices tend to fall every year in the summer when many lobsters reach legal trapping size and catches increase.”

Other mid-year forecast highlights from SpenDifference:

• Poultry: chicken breast pricing is down about three percent; heavy demand later this year for chicken wings could force an increase. Turkey has returned to levels not seen since before the 2015 avian flu outbreak.

• Cheese: down six percent this year.

• Soy oil: No firm prediction here because cost remains volatile due to demand.

It’s not the perfect pricing scenario for restaurant operators, but it’s darn close. Operators who raised menu prices to accommodate higher costs for key ingredients are now positioned to see margins expand automatically. The job of keeping your restaurant’s food costs in line is going to be less of a worry than it has been in years.

The National Restaurant Association agrees that a favorable pricing climate should prevail throughout the rest of 2016.

“Restaurant operators can expect to see an overall general decline in wholesale food prices this year, especially in commodities like beef, pork and eggs, as herds and flocks are recovering from recent challenges,” says NRA research head Hudson Riehle. He says wholesale food prices were down 2.9 percent through April on a year-to-date basis. Even coffee looks good.

The only potential fly in the ointment: fresh produce, reflecting ongoing drought conditions in important growing areas. “Operators of salad-focused concepts could feel more of a pinch as the year progresses,” Riehle cautions.

Large chains have purchasing specialists who are already making the most of these favorable prices. Independent operators might want to contact distributors to explore opportunities within reach.