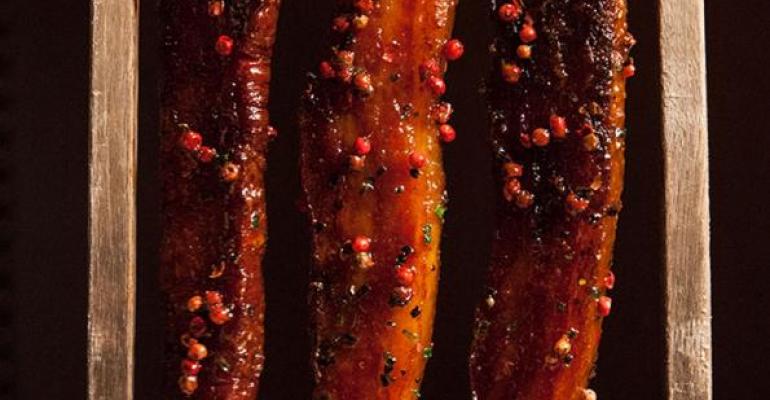 Scorched herbs find a place at the table

Used as a showy garnish, smoldering herbs are a hot item.

Smoky flavors are becoming increasingly popular in both food and drinks.

According to Datassential, smoked, charred and burnt menu mentions have more than tripled in the last decade, from two percent to seven. Mezcal and peaty whiskeys are proliferating in cocktails. And the growing number of restaurants with their own smokers are putting them on overdrive to cure meat and fish and to add new aromas to vegetables and even dairy.

But chefs and bartenders are finding another way of bringing smoke to the table by garnishing their food and drink with smoldering herbs.

Chef and restaurateur David Burke does that with his Clothesline Bacon, for which thick slices of bacon are slowly baked for three hours, basted frequently with a black pepper-maple glaze, then clipped to a miniature clothesline and served over a branch of smoking rosemary.

Avila spreads fresh rosemary on a sheet pan, sprinkles it with lemon water and then dries it out in the oven for about seven minutes.

Then for each bacon order he torches a sprig with his blowtorch, lets it burn down to smoking embers and places it under the bacon.

“It has kind of a wow factor. The customers really do like it a lot.” In fact, he said the $19 dish is his top-selling appetizer and he goes through 300 pounds of bacon a week.

Chef Michael Perez took a similar approach recently at his restaurant Colletta in Alpharetta, Ga. He said he recently served a dish of bone marrow, chanterelle mushrooms, lemon and parsley on grilled focaccia around a bowl of smoldering rosemary because it added a new layer of flavor to the dish and because it made the entire table smell like an Italian kitchen.

Bartender Michael Sturdivant scorches thyme sprigs for his Thyme Squared cocktail at The Cedar Social in Dallas. The drink combines bourbon, lemon juice, simple syrup and Bigallet Thyme Liqueur, and garnishes it with burnt thyme. He ties thyme sprigs together with a lemon twist and then torches them “just enough to burn the little leaves.”

He said he was inspired by the aroma of chef Justin Box’s rack of lamb, which is seasoned with thyme.

Smoldering herbs even have a place in desserts, such as at Uncle Jack’s Steakhouse in New York City, where the s’mores jar, a periodic special of chocolate pot de crème, graham cracker crumbles and marshmallow topping is accompanied by smoldering rosemary, evoking the resinous smell of a campfire.