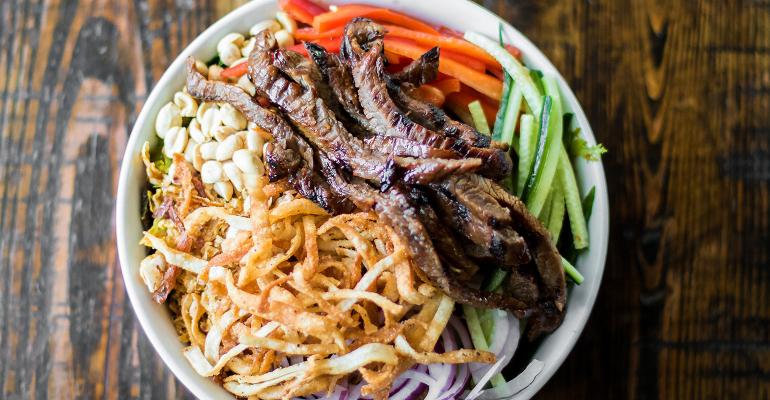 Most fans can’t agree which style of American barbecue is best — Texas, Kansas City, Carolina or Memphis. But a growing number of chefs agree that Korean flavors are a deliciously good match for any of them.

Boneyard Bistro specializes in slow-cooked American barbecue and regional styles, such as Texas brisket, South Carolina pulled pork and Santa Maria, Calif.-style tri-tips and beef ribs, but Robins also like to add a touch of global flavors, including Korean, to his menu now and again.

For example, Boneyard previously offered venison saddle galbi, which means “ribs” in Korean, topped with house-made kimchi and rolled into pinwheels and then grilled. He likes to use gochujang, a fermented Korean red chili paste, in brisket and in marinades, or as dressing for spicy slaws. Kimchi Smoke mashes up Korean and American flavors with the Chonut, a doughnut topped with smoked brisket and smoked kimchi. (Photo courtesy of Kimchi Smoke)

Robins is currently reworking Boneyard’s menu and is considering adding an international-influenced barbecue section that he says would definitely include Korean flavors, as well as Latin, Moroccan and others.

More chefs are using Korean flavors, in part, because they are both familiar and foreign to diners, say Jet Tila, celebrity chef and author of the recently published “101 Asian Dishes You Need to Cook Before You Die.”

“They’re familiar: the soy, sweet, almost-teriyaki-like,” said Tila. “[Yet, there’s] something slightly perceived to be a bit foreign.”

But they won’t likely be foreign for long, predicts Tila. He uses a lot of gochujang in television appearances and believes it will go mainstream. Additionally, his new cookbook includes several Korean barbecue recipes.

“I wasn’t planning to do it this way,” said Cho, a real estate broker-turned-self-taught-chef who was born in Korea but raised in New Jersey. “I just serve what I like.”

He’s also cooking up innovations such as The Chonut, smoked brisket with chipotle sauce, smoked kimchi, cheese and bacon on a glazed donut; and Cholander Fries, Cho’s version of poutine or disco fries, made with seasoned French fries topped with house-smoked kimchi, pulled pork, bourbon-chipotle sauce and cheese.

“It’s American barbecue with some Korean flavor,” explains Cho. “Most people love it, some people don’t understand it. I have to explain it. You can’t really get this anywhere else.”

Cho and Tila attribute the growing interest in Korean flavors, at least in part, to the rise of Korean-American chefs such as David Chang and Roy Choi whom they credit for having brought Korean food to the forefront. Others point to the growth of first-generation Americans and children of Asian immigrants who have become chefs, as well as the growth in non-Asian chefs fascinated with Asian food.

Howard Hsu and Anita Hsu, owners of Sweet Auburn Barbecue in Atlanta, are among those first-generation American chefs helping to showcase Korean flavors. The siblings grew up eating at their immigrant parents’ Chinese restaurant as well as being exposed to other Asian cuisines, including Korean.

“When we opened Sweet Auburn we wanted to be authentic and a bit unique at the same time,” said Howard Hsu. “We wanted to pay homage to barbecue but we also felt like barbecue or grilled meats or open-fire meats was worldly and we wanted to bring our ethnic background to our restaurant.”

In addition to classic Southern barbecue, Sweet Auburn’s menu also features Korean-influenced dishes such as the Southern Seoul Korean sandwich, made with beef marinated Korean-style with soy, sugar, garlic, onion, sesame seeds and citrus, then grilled and served on a potato bun with a spicy aoli, sliced cucumber, daikon, carrots, and cilantro.

The owners of Sweet Auburn Barbecue pay homage to their heritage by putting Asian-inspired dishes on the menu. (Eric Sun Photography)

There’s also a bulgogi — which translates to “meat” in Korean — salad, made with the same marinated grilled meat on a bed of greens along with fried wontons, cucumbers, red peppers peanut and a spicy peanut dressing.

The addition of Korean-influenced dishes to the menu at Dinosaur Bar-B-Que, a Southern barbecue concept with nine locations, came from a bottle of gochujang brought to the table by founder John Stage during menu development for the 2015 opening of the Chicago unit.

“He brought gochujang to the table and I dug into some Korean flavors,” said Executive Chef Leland Avellino. “From there, our Korean barbecue-influenced dishes were born.” The dishes include the Korean BBQ Skirt Steak, grilled and served with house-cured chow-chow and Korean barbecue steak sauce; Jumbo BBQ Wings, spice-rubbed, pit-smoked and grill-finished with the option to dress in a hot Korean barbecue sauce; and porchetta, a Korean-style pork belly rolled, smoked and spiced with a center-cut rib and smoked hot sausage link.

Because the simplicity of Korean makes it easy to incorporate into and cross-utilize on a menu, Tila predicts more chain restaurants, not just independents, will likely be adding Korean influences to their menus.