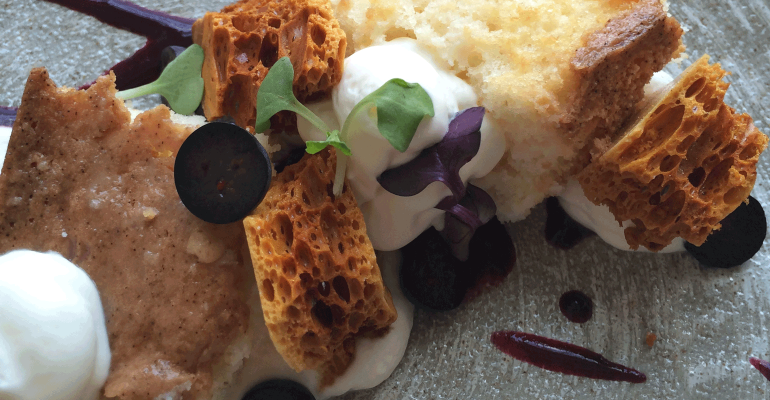 Churros and tres leches cake among sweets getting new spins

As Latin cuisine continues to grow in the U.S., desserts such as churros and tres leches cake have become familiar to American diners. Now, chefs at Latin and non-Latin restaurants are offering localized, Americanized and deconstructed versions of these treats.

“Latin cuisine may seem ‘same flavors’ to many chefs, but in reality, every family, every restaurant has a special way of using ingredients to let their specific flavors show,” said chef Vinson Petrillo of Zero Restaurant & Bar in Charleston, S.C.

At Zero, whose menu is not tied to a particular cuisine, Petrillo serves a deconstructed tres leches cake, the classic three-milk-soaked sponge cake. Petrillo’s version showcases the unique tastes and textures of young coconut, spongy cake and honeycomb.

“I work hard to try and re-create truly classic flavors from many countries and transform them into a dish that is mine,” he said.

Petrillo’s hard work seems to be paying off: The cake is “one of the most successful dishes I’ve ever put on a menu,” he said. “I wanted to make this dish different. I grew up eating tres leches, but I found it always too sweet,” Hernandez said. “My goal was to bring more depth and dimension to this dessert without making it too sweet.”

“I really enjoy dulce de leche, and I think that alfajores is the perfect dessert,” Morris said. “We decided to have more dulce de leche and less cookie by creating this deconstructed version.”

On the menu since Ronero opened in December 2016, alfajores is the restaurant’s bestselling dessert. At Boiler Nine Bar & Grill in Austin, Texas, chef Emily Maddy adds a Texas touch to churros, the sweet Mexican fried dough, with churritos. Maddy’s bite-sized version of the dessert is dusted in cinnamon and sugar, and, for a little Texas flavor, is served with a side of sweet tea caramel.

“I had a great recipe for churros from a fantastic Honduran that I worked with at a previous job,” Maddy said. “The churritos are great for sharing, and the sweet tea caramel that it's paired with ties in Texas. It's one of our bestselling desserts that has been on the menu since opening day — a real crowd pleaser.”

“We realized that due to the high sales of our pork belly buns, we were accumulating a lot of pork fat, and developed this recipe to use that delicious fat,” Santiago said. “The cookies were a hit and have become a staple of El Super Pan — an authentic shortbread made old-school-style with real lard.”

Santiago also makes chipotle chocolate chip cookies, in which the popular American cookies get a kick from Mexican chipotle peppers, or smoked and dried jalapeño pepper.

“I choose to combine Latin and American ingredients because they go together, just like us Latin-Americans," he said.