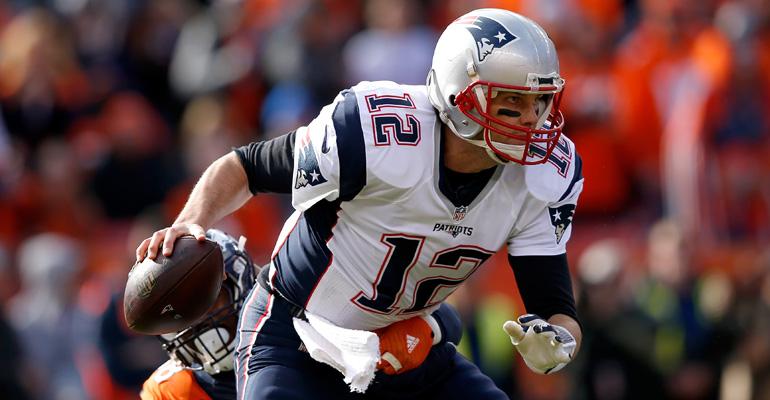 Health-centric food options haven’t been part of the menu strategy for successful sports bar operations so far. But some of dishes found in New England Patriots quarterback Tom Brady’s cookbook should hold appeal for sports bar patrons who want to chow down on healthful meals without feeling like a wimp. Cost for operators to gain access to the 89 “seasonally inspired” recipes contained in Brady’s TB12 Nutritional Manual? $200.00.

Did we put the decimal point in the wrong place? Nope, Brady is asking two hundred bucks for his book. That’s roughly $2.25 per recipe. If that’s a fair rate, the most recent edition of Joy of Cooking should cost about $11,000.

Part of the Brady book’s stratospheric pricing is due to its high-end specs. “The manual is printed and hand assembled in the United States, and is printed on thick 100 pound text paper. The covers are made from natural wood with a laser-etched TB12 logo and title,” his website says. The format is that of a loose-leaf binder, the idea being that book owners will clip in additional recipes Brady plans to release later.

But it’s Brady’s celebrity that accounts for most of the markup. He’s justifiably famous for his on-field achievements (Brady is one of two players to win multiple Super Bowl MVP and NFL MVP awards; Joe Montana is the other) and, perhaps even more so, his longevity. Drafted in 2000, he’s ancient—age 38—by NFL standards.  Brady credits his primarily vegetable-based diet with keeping him not just in the game but at the top of it. This eating style also keeps Mrs. Brady—supermodel Gisele Bundchen—at the top of her game—fashion—as well.

Here’s what’s on the don’t eat list at the Brady-Bundchen household:

So what does the Brady family consume?

"Eighty percent of what they eat is vegetables,” Campbell says. “[I buy] the freshest vegetables. If it's not organic, I don't use it. And whole grains: brown rice, quinoa, millet, beans. The other 20 percent is lean meats: grass-fed organic steak, duck every now and then, and chicken. As for fish, I mostly cook wild salmon," he told the Boston Globe.

The marketing materials for Brady’s yet-to-be-released book offer just a hint of its contents. Recipes for avocado ice cream and sweet potato gnocchi with escarole are the only ones to have surfaced so far. The rest will be revealed when the book ships in early June.

Sports bar operators shouldn’t fear that Brady’s style of eating can’t find commercial success in the restaurant world. It already has for Dr. Andrew Weil and restaurateur Sam Fox. That’s all they serve at their True Food Kitchen concept, which now numbers 12 units and has seven more on the way. www.truefoodkitchen.com

A menu featuring dishes that adhere to Dr. Weil’s anti-inflammatory diet would be a tough sell in a sports bar situation. But the same approach, given the Brady imprimatur, could give sports bars or other restaurants that cater to sports fans a definite edge. For example, to draw a crowd for the Sunday night matchup between the Patriots and the Arizona Cardinals on NFL opening weekend this year, you could advertise “30 HD TVs, 16 craft beers on tap, 6 Tom Brady-approved specials.”

Don’t want to spring for a $200 book? The alternative would be to order True Food: Seasonal, Simple Pure, in which Weil and Fox provide 125 original recipes that have earned “greatest hits” status at True Food Kitchen. The hardcover version sells for $17.28 at Amazon.com. The paperback goes for $12.86.

Don’t feels sorry for Brady if you opt for the less-expensive way to gather information about his diet. The initial printing of his $200 TB12 Nutrition Manual has already sold out.
Contact Bob Krummert: [email protected]