Evette’s Chicago, a restaurant in that city’s Lincoln Park neighborhood, combines Lebanese and Mexican cuisines through dishes such as this one, for which owner Mitchell AbouJamra combines grilled chicken with red onion, radish, tabbouleh, whipped feta, cucumber yogurt and Aleppo chile oil and serves it in a flour tortilla.

At Bar Zazu at Resorts World Las Vegas, executive chef Nicole Brisson and chef di cucina Arnold Corpuz use the femur bones from the Creekstone Farms Black Angus beef that they dry-age for other menu items.

The bones are sawed in half, slow-roasted and topped with pickled mustard seeds, gremolata, pea shoots, lettuce spears and trumpet mushrooms that are marinated in sherry vinegar, salt, thyme and olive oil and then roasted.

At The Dutchess, a Burmese restaurant that just opened in Ojai, Calif., chef and partner Saw Naing created his version of this beloved dish from his childhood.

He starts by importing tea leaves from Myanmar and preserving them in a blend of canola oil, ginger, garlic, salt and “lots and lots of lime juice.” He cures them for 2-3 weeks, a process that removes the leaves’ bitterness and gives them a flavor he says is similar to cured olives.

“You can actually go months and months with this preservation process, so I’m excited to start experimenting with that down the line and really understand how the flavor evolves,” he said. “We then save the oil and reuse it to ferment more tea leaves, so each batch just gets richer and richer.”

Originally, Naing was going to serve the salad as pictured, with its components laid out to be assembled by guests, but ultimately decided it would work better served already mixed. Along with the tea leaves, pictured in the center are tomatoes, sesame seeds, peanuts, fried shallots, fried garlic, lime and mint, which are part of the traditional preparation, along with cilantro, which is not normally used, but Naing said he loves it.

“My mom actually keeps scolding me that I use cilantro because she feels it overpowers the tea leaves, but I just love this herb so much and I see it as putting my own California take on the dish,” he said.

He also adds nontraditional radishes and turnips to the dish for crunchiness, as well as local lettuces such as Napa cabbage and red gem lettuce, which aren’t pictured.

At FNG, Troy Guard’s restaurant in the Highlands neighborhood of Denver, chef de cuisine Charles Rivera and his team roast sweet potato wedges and then finishes them in a hot sauté pan until lightly caramelized. Then the potatoes are tossed in a glaze of agave syrup and sambal-style chile sauce. They’re topped with Thai basil, cilantro, mint, green onions and Fresno chiles dressed in nuoc cham — a sauce of sweetened fish sauce and vinegar — and finished with fried shallots.

Vegan Walks up to a Street Cart
Melanie Dunea

For this dish at Spring Café Aspen New York, so-named because the original location is in Aspen, Colo., owner Sabrina Ruben was inspired by halal street cart food. She and her team marinate cauliflower in a combination of cumin, turmeric, coriander, ginger and garlic. That’s roasted and layered on millet-and-flax lavash bread with shredded romaine lettuce, avocado, shaved white onion, cherry tomatoes and a white sauce made with aquafaba mayonnaise blended with oat milk, rice vinegar and garlic. It’s finished with an habanero chile-based hot sauce.

The dish is only available at the New York City location. 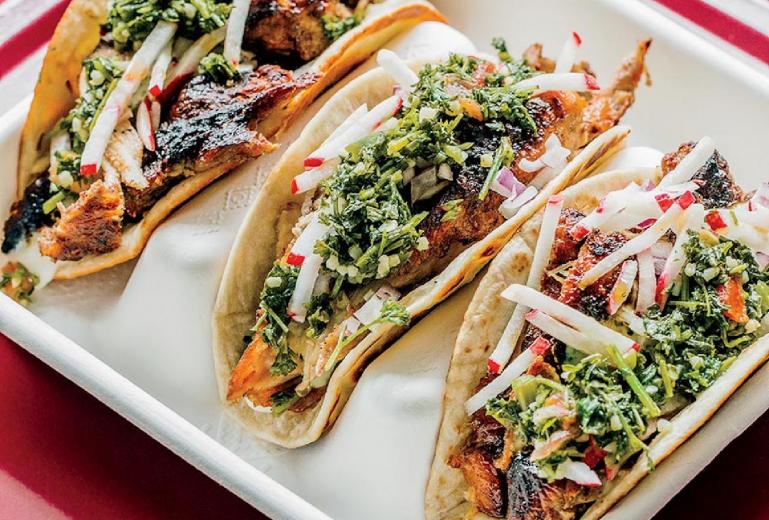