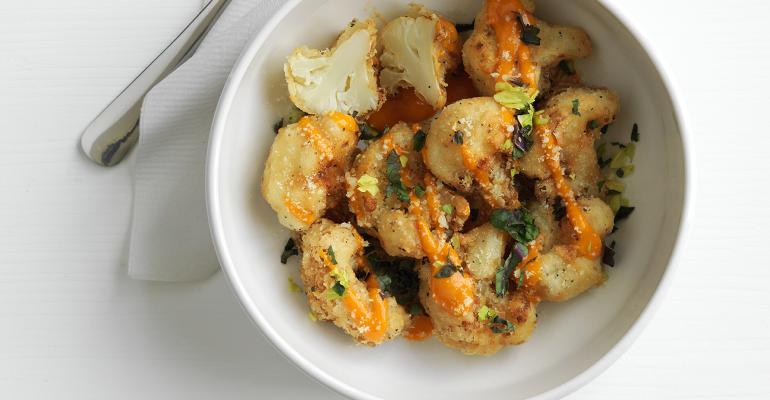 As more Americans choose to eat vegetarian or vegan meals, restaurants with menus that celebrate meat are adding plant-based dishes that are as exciting and flavorful as their animal-based counterparts.

In May, the restaurant, which has locations in Santa Monica and West Hollywood, Calif., added four plant-based dishes to the menu — all vegan versions of on-trend appetizers or entrees.

The new dishes include poke made with diced beets; a vegan “bacon” guacamole burger made with a Beyond Meat burger patty; Mediterranean chickpea panelle, meant to evoke a falafel sandwich; and nidi bolognese made with almond-milk ricotta and mushrooms instead of meat. The pasta even comes with grated “cheese” made from olive oil powder.

Before adding the items, the only options for non-meat eaters at BOA Steakhouse were a few vegan sides or a vegetable plate.

“I always felt bad about serving it to people. It’s kind of boring,” Neflas said about the vegetable plate. “With these options, we’re looking to capture a wider audience. It’s opening us up to a brand-new dining sector.”

The wider audience Neflas referred to is out there. About 37 percent of Americans said they always or sometimes eat vegetarian meals when dining out, according to a recent survey from the Vegetarian Resource Group, a non-profit organization that aims to educate the public about vegetarianism and veganism.

Also making a strategic move to appeal to vegetarians and vegans is Cincinnati-based Buffalo Wings & Rings, which is best known for chicken wings. The chain recently introduced cauliflower “wings,” made with fresh cauliflower florets that are hand-breaded and fried to order, topped with a roasted garlic sauce and a sprinkle of Parmesan cheese. First introduced as a limited-time offer in October 2016, the vegetarian “wings” were so well received that the chain added them to the permanent menu in May. So far, Masadeh said the item has been popular with customers who want a vegetarian choice, women, and groups who order it as an appetizer to share.

“We wanted to offer a dish that was not only delicious, but one that would give our vegetarian guests the same wow factor as someone ordering a 16-ounce bone-in filet, or 24-ounce bone-in rib eye,” executive chef Justin Diglia said. In Chicago, Honey Butter Fried Chicken is all about its signature fried chicken served with honey butter, but it’s also got vegetarians covered. Two years ago, chef and owner Christine Cikowski added an option to swap fried chicken for locally sourced, fried tofu strips on any sandwich.

“This is a way for our customers, meat eaters or not, to have a nutritious and wholesome alternative that is first and foremost delicious,” Cikowski said. “It is also important to us to not dismiss our vegetarian customers’ desire to have a full meal, rather than just piece one together with sides or a salad.”

Other meat-centric restaurants are consciously offering sides or appetizers substantial enough to make a meal. Bazaar Meat by José Andrés, at the SLS Las Vegas, offers a vegetarian take on steak tartare made with beefsteak tomatoes.

“Our ‘beefsteak’ tomato tartare is both a play on words — the variety of tomato we use is called beefsteak — and a light, refreshing break from the onslaught of meat our guests experience,” said Bazaar Meat executive chef Alex Pitts.