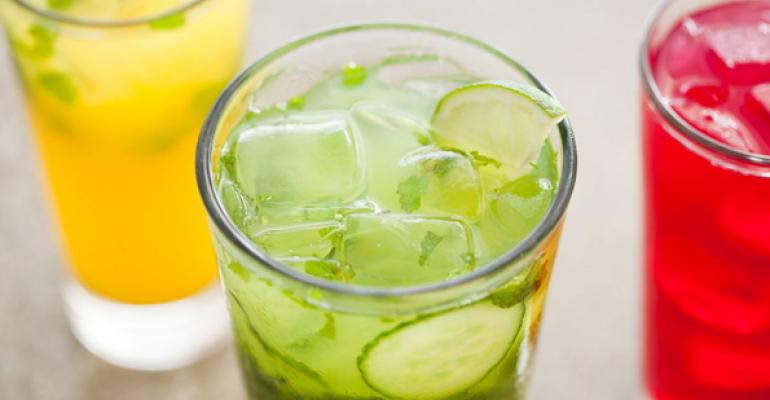 If you’re still trying to figure out a way to benefit from having superfoods on your menu, take a look at what two market-savvy concepts are trying now that warm weather is here. McDonald’s—yes, McDonald’s—is introducing a blueberry pomegranate smoothie while healthy fast casual newcomer LYFE Kitchen has rolled out a seasonal menu packed with superfood-based items. The shared strategy: both concepts selling “superfoods” without describing them as such to customers.

You’d think McDonald’s would be the first to tout the availability of a superfood-related item on its menu. But the company is playing is straight. Here’s how the chain positions its drink:

“The newest addition to the McCafé Smoothie line focuses on the latest trend in berries—made with a luscious blend of blueberries and raspberries and a splash of pomegranate juice. The tart pomegranate juice with the sweetness of blueberries and raspberries presents a unique taste. Starting at 220 calories for a small size, the new smoothie offers choices from some of the USDA’s MyPlate recommended food groups, such as dairy and fruit. Additionally, the Blueberry Pomegranate Smoothie is freshly prepared for each individual customer.”

All good, and the top-line nutrition numbers on the blueberry pomegranate smoothie are attractive. The 12-ounce size referred to above has 220 calories, 2 grams of protein, 0.5 grams of fat and just 50 calories.

Given this long list of ingredients, it’s probably wise for McDonald’s to stay away from the superfood label and let nutritionally aware customers figure it out for themselves. That said, this drink makes a strong statement about the direction McDonald’s might be going with part of its menu in the future.

LYFE Kitchen, on the other hand, has been all about healthful dining during its short existence. Headed by former McDonald’s execs and sporting a culinary team that includes chefs Art Smith, Tal Ronnen and Jeremy Bringardner, the two-unit concept has big plans for growth. Its spring/summer menu is packed with healthful items, many of which are pumped up with superfood ingredients.

Among the seasonal salads LYFE Kitchen now offers are these two:

• Kale Caesar! “With the popularity of kale at an all-time high, LYFE Kitchen is adding sweet, succulent baby kale to its Caesar salad,” the company says.

New drink items from LYFE include the following duo:

• Strawberry-Rhubarb Chia Water. Effervescent Strawberry-Rhubarb Chia Water is billed as “a beverage that helps cleanse the body and soothe the throat.” It’s fortified with chia seeds—“an amazing superfood that provides energy, lasting hydration and serves as a great source of omega-3s and omega-6s,” the company points out—but LYFE doesn’t make those claims on the menu.

• Beet-Hibiscus Cooler. “While the beverage world remains transfixed with green juices,” LYFE Kitchen says, it is exploring “the next ‘it’ ingredient—beets.” Beets are indeed a trending ingredient, and have been after beet juice became the legal performance-enhancing drink of choice among athletes at the 2012 Olympics.

LYFE Kitchen is designed from the ground up to go all in on healthful dining. McDonald’s is just playing nutritional catch-up. Yet both are taking the “stealthy healthy” approach to superfoods, menuing them as they would any other ingredient. No matter where your restaurant sits on the healthful dining spectrum, this strategy—let the superfoods fan find you—looks like a smart one to follow right now.