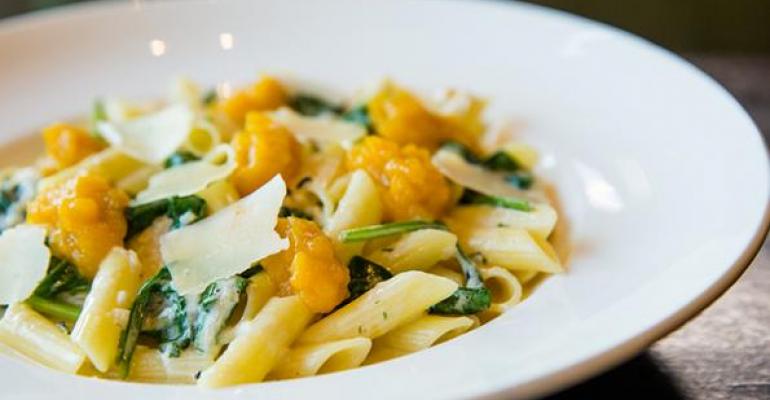 The next generation of gluten-free menu items is heightening flavor, customer satisfaction, profits

The gluten-free movement has traversed a variety of stages: In the beginning, it seemed like a trend — or worse — a fad. Then came replacement bread and pasta that looked and tasted like cardboard. In recent years this trend has proven it’s here to stay, and gluten-free retail products and menu items have gotten better by leaps and bounds.

So what’s next for no-gluten foods?

“At first, I thought this would be happening for six months, and then we’d be onto the next trend, but now, here we are, three years later,” says Johan Engman, owner and founder of the Rise & Shine Restaurant Group, a group of restaurants in San Diego.

Engman’s girlfriend follows a gluten-free diet. She’s been an honest sounding board and guinea pig for his new menu ideas, he says, adding, “She’ll tell me if it’s no bueño.”

While Engman has a personal investment in this topic, he also sees having great gluten-free menu items as smart business. Ignoring the demand for gluten-free options means missed opportunities that can’t even be measured.

“I think some people may write it off as, ‘it’s only a small percentage of the population,’ based on some statistic that they’ve read,” Engman says. “But you have to think of the group. If you have a group going out to a Sunday brunch, and there’s one gluten-free person who says, ‘Can we please go to this one place, because I can eat there?’ You can’t really measure that. It’s not just about trying to appease one person, it’s about not having 10 people come in at all.”

Johan has made a few adjustments that led to his idea of the perfect gluten-free menu synergy, which is “when it doesn’t change the dish or the flavor, but makes it gluten-free, that’s such a huge benefit to offer that to people who wouldn’t be able to eat it otherwise.” He cites his housemade gluten-free pizza dough and hollandaise sauce made with rice flour as perfect examples.

Akasha’s approach to gluten-free on the menu

Akasha Richmond, chef/owner of Akasha, a restaurant in Culver City, Calif., with a focus on New American cuisine, agrees with Engman that gluten-free dining is here to stay.

“Remember, we’re in California,” Richmond says. “I’ve seen so many fads come and go, but this one is different.”

So for a long time, Richmond has been incorporating gluten-free options onto the menu and making sure her servers are ready to answer questions.

Richmond’s menu approach is to present a good selection of menu items that are naturally free of gluten, like rice bowls, quinoa dishes, flourless chocolate cakes and crème brulée. She doesn’t force it, in other words.

A lot of the world cuisines that have shaped Richmond’s culinary identity lend themselves well to gluten-free menu items, like Vietnamese and Thai, with their abundance of rice noodles and rice-paper wraps. Many Italian cookies, like meringue, amaretti or walnut, are naturally gluten-free.

Another factor, the decision of many diners to cut back on carbs, also makes gluten-free options a must. Some of Richmond’s dishes that are popular with everyone also happen to be gluten-free, like chicken with roasted squash and greens or trout with a Sicilian relish.

“We get so many people who just want protein and vegetables,” she says. “It’s not like we’re trying to make gluten-free versions of everything.”

To help placate gluten avoiders, Richmond has found a great gluten-free pasta supplier in Italy and a killer gluten-free bakery in town. The gluten-free pasta holds its own among the regular housemade pasta at Richmond’s Italian restaurant, AR Cucina, also in Culver City.

“I try to go to Italy once or twice a year, and you can’t imagine how much good gluten-free pasta there is in Rome,” she says, adding that at least one dedicated pot of water for the gluten-free pasta is always available in the kitchen. “These brands from Italy are so good. Gluten-free people come in and they’re so happy.”

Likewise, Richmond reports customers “going crazy” for the gluten-free bread. To avoid having customers go crazy in a bad way, it’s essential that the entire staff — front and back of the house alike — understand what it takes, consider questions and requests from customers seriously and follow procedures to keep everything as safe as possible, Richmond says.

“They know. They’re used to it,” she says. “All the chefs hate it…until they have a child who needs a gluten-free diet.”

How to develop a gluten-savvy staff

While many customers with celiac disease aren’t shy about speaking up, that shouldn’t have to be the case, and it’s actually a violation of the customers’ privacy, according to Cynthia Kupper, CEO of the Gluten Intolerance Group of North America (GIG). Kupper, whose group helped establish the gluten-free certification logo, has worked with restaurants for 18 years teaching them how to make safe food for everyone. She notes that many restaurant operators don’t understand what it entails.

In many restaurants, servers are asking whether a diner is requesting gluten-free food because of an allergy, or if it’s by choice, presumably to gauge how careful the kitchen should actually be. That’s the wrong approach, Kupper says.

“This sends a message that unless I share my medical history, they won’t prepare my food safely,” she says. “There’s a legal issue; they’re not allowed to ask me for my medical history. If they treat a gluten-free request two different ways, unless I’m willing to tell you I have celiac disease, I may not get a safe meal and I may end up sick.”

Kupper attributes some of the lack of understanding to the fact that unlike a peanut allergy, in most cases, a bad reaction to gluten won’t happen instantly, making it less of the restaurant’s problem.

“If I get gluten in a restaurant, I’m not going to pass out or keel over, like you would with a peanut allergy,” she says. “It takes an average of 4 to 24 hours to have a reaction, and then it’s harder to pinpoint where I got gluten. So restaurants don’t see the immediate impact.”

To avoid making guests ill, Kupper advises restaurants to keep practices and procedures very consistent, and look to make some low-cost and no-cost tweaks to their food handling, storage and hygiene systems that can make a big difference (see “Gluten-free hacks,” below).

“I really do believe restaurants want to do the right thing, but sometimes it’s hard to know what the right thing is. That’s why it’s good to work with organizations like GIG and we have a certification program,” she says. “Training is so important. The front of the house has to know what the procedure is. What are the questions they’ll be answering? If they don’t know, they shouldn’t fake it, because gluten-free customers can spot that lack of confidence.”

The gluten-free community tends to be outspoken, and social media has only amplified its voice. But there is good news, Kupper adds.  “If they like you, they really like you.”