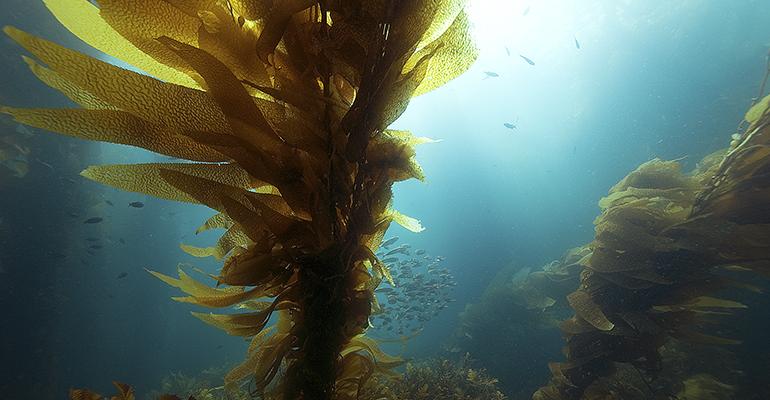 Frankenfish or 3D ocean farming? You make the call

It’s not that alternative sources of sustainable seafood don’t exist. It’s just that chefs and/or their customers don't want the fish they produce. Neither “frankenfish” —i.e., the genetically modified (GMO) farm-raised Atlantic salmon just approved by the Food and Drug Administration—nor abundant-but-underutilized “trash” fish seem to be the answer for restaurants.

Let’s look at GMO salmon first. The FDA ruled it safe to eat earlier this month. The agency also declared these fish do not have to be labeled as genetically engineered when sold. The key benefit of GMO salmon is that they grow to marketable size much faster than non-GMO salmon do—16 to 18 months instead of three years.

Fish producer AquaBounty Technologies c.e.o. Ron Stotish says the company’s AquAdvantage salmon is a “game changer that brings healthy and nutritious food to consumers in an environmentally responsible manner without damaging the ocean and other marine habitats.” So it’s sustainably produced, just not in the way many sustainable seafood proponents would prefer.

Which may be why so many companies have announced they will not sell GMO salmon. That list includes almost every major grocery retailer except Walmart and Publix, 9,500 stores in all. Red Lobster won’t offer it, either. “We have no immediate plans to serve genetically modified seafood,” the company told the Dallas Morning News.

It will take AquaBounty about two years to scale up production of GMO salmon. In the meantime, don’t expect what NRA categorizes as “underutilized/‘trash’ fish” to fill in the sustainable seafood availability gap.

Trash fish seemed poised to catch on last year, riding a 12 percent surge to top the “Movers and Shakers” list in NRA’s “What's Hot 2015” survey. However, many of the 1,575 ACF chefs who responded to the 2016 survey changed their mind. The result: Trash fish went from first to worst. It fell 11 percent on the year, finishing number one on the “What’s Not” section of the “Movers and Shakers” list. The steep decline seems to indicate that preparing and marketing trash fish is a challenge many chefs are not eager to take, despite the abundant supply and favorable food costs these species offer.

Where to turn? There is a source: GreenWave, a Fair Haven, CT-based nonprofit that is pioneering multispecies 3D ocean farming. GreenWave’s idea recently won the $100,000 top prize in the Buckminster Fuller Institute’s 2015 Fuller Challenge. It’s the most prestigious award in sustainability design.

Here’s a description of how the 3D ocean farming system works.

“GreenWave’s integrated model shifts the practice of aquaculture from growing vulnerable monocultures to creating vibrant ecosystems, which produce higher yields. The infrastructure is simple: seaweed, scallops and mussels grow on floating ropes, stacked above oyster and clam cages below. From these crops ocean farmers can produce food, fertilizers, animal feeds, pharmaceuticals, cosmetics, biofuels and much more. The farms filter harmful pollutants out of water, sequester CO2, support biodiversity, and are thus designed to restore rather than deplete our ecosystems.”

Note that hurricane-proof anchors on each farm’s edges keep the whole works from being swept out to sea in storms.

The Fuller Institute was impressed by the replicability of 3D ocean farms.

“GreenWave’s flagship farm on the Thimble Islands has the capacity to grow 10 tons of sea vegetables and 250,000 shellfish annually on one acre with zero input and no fresh water requirements. This same one-acre farm is able to filter millions of gallons of ocean water daily. The model’s low entry barrier requires 20 acres of leased ocean, a boat, and $30,000 of start-up costs, and can provide a higher than median income (around $70,000 per year).”

With start-up costs like these, some coastal area restaurant operators might think about funding one or more dedicated 3D ocean farms that would supply their restaurants directly. If you’re one of them, GreenWave is eager to help you get started.

The organization “provides new farmers with grants, low-cost seed, free outdoor gear from Patagonia and training for two years,” reports The Guardian. “And they guarantee to purchase 80 percent of crops over five years at triple the market rate. The crops are then sold to restaurants around the country.”

Much of the national press coverage so far has focused on the idea that 3D ocean farming’s “sea vegetables” (i.e., super-nutritious kelp and seaweed) are the important part of the 3D ocean farming effort.

Could be, but from the restaurant operator’s perspective, kelp and seaweed may suffer from the same problems trash fish does: Customers won’t order them. Taste and texture issues are another concern. But the sustainable shellfish 3D ocean farming produces couldn’t be easier to prepare and sell. If you’re a chef or operator who’d like to go all in on sustainable seafood, think about giving GreenWave a look.