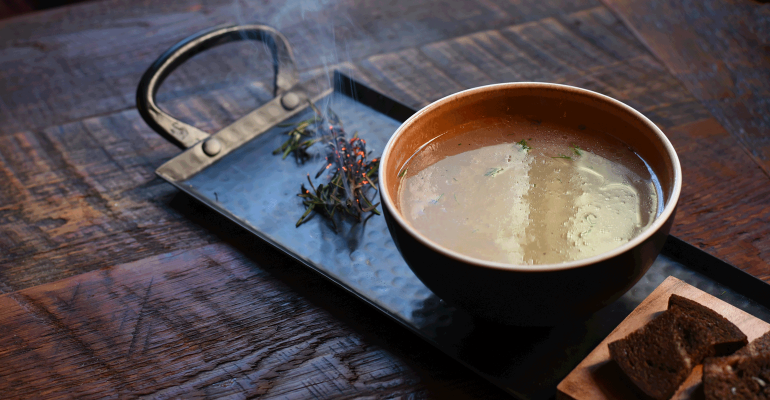 Borscht, goulash and other classics find fans among chefs and diners

At Kachka in Portland, Ore., chef and owner Bonnie Morales serves the food of the former Soviet Union, including a modern take on her Belarusian family’s borscht recipe, which she grew up eating.

“People always ask for borscht,” Morales said. “Borscht is a category of soups. Dozens of different [versions] — cold or hot — can be called borscht.”

Common in Morales’ family and currently on the menu at Kachka is a hot borscht made with beets and short ribs. She serves it as her family did, with a side of black bread and spicy mustard to be stirred into the soup.

Borscht and other retro soups of Russian, Balkan and Eastern European cuisines are hot on restaurant menus right now (well, except when they are served cold).

According to the latest research from Datassential, soup varieties such as borscht, matzo ball and goulash are appearing on more menus than last year.

Like Morales, Jeremy Salamon draws on his heritage, in this case Hungarian, to craft the menu at The Eddy, a globally inspired neighborhood restaurant in New York City where he is executive chef. To that end, Salamon recently added to his menu an oxtail and ancho borscht with almonds, labneh and cilantro.

“I've been interested in Eastern European soups because of their layers,” Salamon said. “Soups such as goulash, halaszle and borscht are made with concentrated stocks using not one but a variety of animal bones. It’s usually laced with really earthy tones such as beets or hearty paprika. They come out tasting decadent, rich and soulful.” At the Eddy in New York City, Executive Chef Jeremy Salomon translates his interest in Eastern European in soups into an Oxtail and Ancho Borscht with almonds, labneh and cilantro.

Salamon also makes goulash, a Hungarian soup of meat and vegetables seasoned with paprika, and is looking forward to warmer weather when he will add his favorite Hungarian chilled cherry soup to the menu.

Goulash is also on the menu at San Francisco’s Paprika, a Czech, Hungarian and German-influenced spot. The paprika goulash is made with tender pork and potato gnocchi.

Both chefs and diners alike are more interested in these types of soups. According to Datassential's Global Flavors Keynote report, 66 percent of consumers are likely to order globally inspired soups.

With borscht, it’s especially helpful that beets are trendy at the moment, according to Datassential.

Among the factors driving diners’ renewed interest in older soups is a resurgence of modern diners, luncheonettes and Jewish delis, Datassential said.

While matzo ball soup is the signature dish at the deli, the upstairs menu features p’tcha, a spin on the traditional Ashkenazi Jewish dish made from boiled calves feet and served in gelatin form. The 2nd Floor version turns the dish into a slow-cooked soup made with veal bone broth, garlic and fresh parsley.

“Americans are very nostalgia-oriented people, and they find mystery and intrigue in escaping to other time periods,” said David Teyf, 2nd Floor’s executive chef. “The taste of a traditional Eastern European soup brings that to the table, and I believe this is why we are seeing an uprising of them on restaurant menus.” A matzo ball-meets-wonton soup is on the menu at Nickel & Diner in New York City.

Nickel & Diner, also in New York City, features elevated interpretations of American diner food, while incorporating the flavors and ingredients of the restaurant's nearby neighborhoods of Chinatown, Nolita and Soho. Chef James Friedberg's signature dish is a multicultural chicken soup, a “matzo ball wonton soup mashup,” made with a traditional chicken consommé base with roasted chicken breast, ricotta dumplings instead of matzo balls, and finished with fresh ginger, leeks and dill.

“I chose to put a chicken soup on our menu because not only is it comforting, but it is universally recognizable,” Friedberg said. “Our version nods to the melting pot that is New York City; hence, my take on a matzo ball — ricotta dumplings — and the addition of ginger, which is widely used in Asian cuisine.”

Other chefs are finding that the versatility of these old-world soups allows them to play with on-trend ingredients, adding freshness to comforting old favorites.

Rooster Soup Co. in Philadelphia, the brainchild of James Beard Award-winning chef Michael Solomonov and his partner Steve Cook, is a globally influenced retro luncheonette serving egg and cheese sandwiches, blue plate specials and, of course, matzo ball soup. The smoked matzo ball soup is made with a chicken stock flavored with turmeric and fenugreek, and topped with chopped dill. The stock is made from spare chicken parts leftover from making fried chicken sandwiches at the group’s Federal Donuts concept. Additionally, all profits go to support vulnerable Philadelphians through Broad Street Ministry’s Hospitality Collaborative.

Mixing Old World and New World ingredients is the entire point of Ambar, Ivan Iricanin’s modern Balkan restaurant in Washington, D.C. A traditional Balkan veal soup made with organic veal and root vegetables, served with crème fraiche and a lemon wedge, is among the restaurant’s best-selling dishes.

“I believe that these soups are more and more all over the menus because of the Eastern European spices and methods of making, which is not that common for the American diners,” said executive chef Dejan Pilovic. “Our veal soup recipe is something that in our culture we transfer from older to younger generations, and although there had been slight changes, this soup remains unique with traditional Balkan spices and stunning flavors.”

A menu of traditional and non-traditional Russian dishes inspired by family recipes, including borscht, are the focus of Teremok, a fast-casual chain founded in Moscow, in 1998, that recently opened its first location outside Russia, in New York City. The borscht is re-imagined for American diners with beets, carrots, cabbage, garlic, tomatoes, bacon, and a topping of sour cream and herbs. Also on Teremok’s menu is a Russian fish soup called ukha, a chowder made with smoked salmon, carrots, soft cheese, and topped with housemade chips and herbs.

Our hot and hearty soups will warm not only your body, but also your soul pic.twitter.com/iN3VgR2I7i

But it’s not only chefs and diners who grew up eating these soups who are ordering them.

Morales counts among her patrons new immigrants from Russia, Belarus, Georgia and Ukraine, those who cry over their bowls because they haven’t had a particular dish since their grandmother passed, as well as people entirely new to Russian cuisine.

“We have lots of regulars,” Morales said. “The response has been kind of overwhelming.”

Meanwhile, at 2nd Floor, Jeremy Lebewohl hopes to introduce a new generation to the foods he and his brother grew up eating.

“[Our target customer is] anyone looking to be transported back in time,” he said.  “We want to be a place where guests can come enjoy a drink and some nosh with friends, and maybe even try something new.”