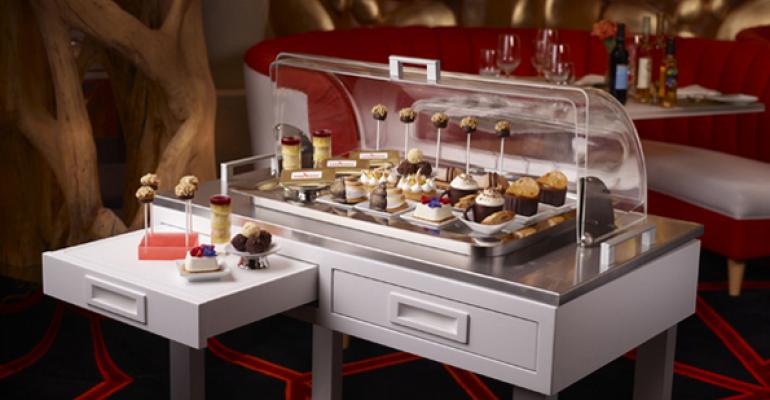 <p> When it comes to desserts, seeing is buying for many restaurant patrons.</p>
Archive

Tablet technology that sits on tabletops and upsells customers as they eat? It’s no wonder casual dining giant Chili’s will roll out Ziosk tabletop tablets in 823 units over the next few months. The chain’s tests found that check averages rise when tablets flash drool-worthy images that prompt patrons to place dessert orders while still eating their main course. But if seeing desserts is buying, wouldn’t the old-fashioned dessert cart or an improvised equivalent do the same at your place?

Chili’s isn’t replacing waitstaff with tablets. Guests still place their initial food and drink orders with a server. The tablet takes over from there.

Ziosk and Chili’s describe the setup this way:

“With the primary purpose of enhancing the guest experience, the Ziosk 7-inch tablet will be displayed on each table in the restaurant, giving guests the ability to interactively peruse menu items and specials as well as order beverages and desserts whenever the craving strikes. Additionally, when not engaging with their server, guests can play games together, share their real-time feedback with the brand and pay the check right at the table the moment they choose.”

This system should produce benefits on several fronts for Chili’s. A big one looks to be an increase in the number of high-margin desserts sold. Chili’s v.p. of brand strategy Krista Gibson tells the Wall Street Journal that dessert sales rose almost 20 percent in units where Ziosk tablets were tested.

The key takeaway for other operators here is that the Chili’s test results demonstrate that when guests see what a restaurant’s desserts look like—and if they can see them before they’re full from eating their main course—they will order them more frequently. The visuals and the timing both matter.

One old school approach to creating dessert sales—the dessert carts that first began rolling through dining rooms during the heyday of continental cuisine—gets the visual part right. Experiencing the sights and aromas of scrumptious desserts tableside makes it harder for customers to resist. The same goes for restaurants where servers present a tray of dessert options when attempting to sell customers desserts.

The problem with either approach is the timing. When servers inquire at the end of the meal if “anyone saved room for dessert,” they learn that many haven’t. The result: fewer sales.

Most dessert purchases in full-service restaurants are impulse buys—86 percent, according to a Northstar Research Partners study. The Chili’s test indicates that customers seem to be more likely to yield to their impulses during a meal than after.

There are a couple of ways restaurants that don’t have super-slick tablets on their tables can up their game on dessert sales. Many operations already display pictures of desserts on menus or on tabletop merchandising materials. Either method lets customers know what the dessert possibilities look like and gets them thinking about ordering one when the time comes. Other restaurants have a staffer circulate through the dining room with a tray of dessert choices, showing patrons what their options are early on in the dining sequence.

Neither of these methods makes an immediate sale like the Ziosk tablet does. That’s the beauty of the Chili’s approach. But at least they get customers thinking about what they might order later on. If your rely on descriptive menu language alone to sell desserts, and if you notice patrons craning their necks to check out those desserts when servers deliver them to nearby customers, you may be missing out on sales. Chili’s got a 20 percent boost in dessert category sales for its efforts. Might your restaurant be able to do the same?