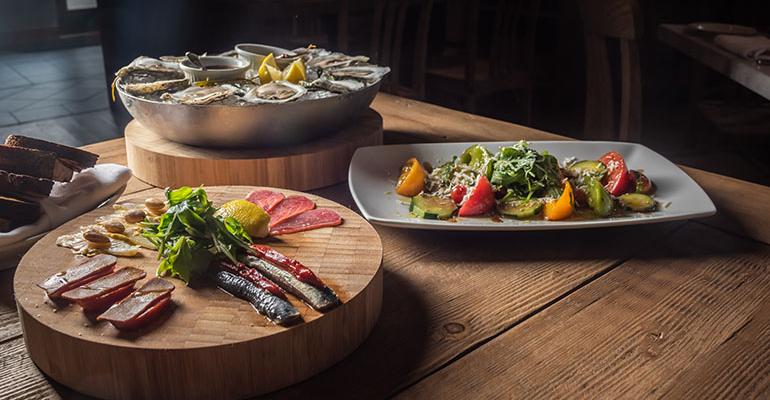 At a reopened, scandal-free Esca, the chef focuses on seafood 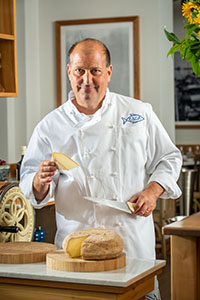 “I mean, the fish is the fish. It’s not like you’re going to go out and find a new species,” said Dave Pasternack, the New York City chef who pretty much introduced America to crudo — the raw fish style that is Italy’s answer to sashimi.

Pasternack has been the executive chef of Esca since the seafood-focused restaurant opened in 2000 as part of what at the time was the burgeoning empire of Mario Batali and Joe Bastianich.

In the aftermath of Batali’s sexual misconduct scandals that emerged starting in December of 2017, sales reportedly suffered and Pasternack ended up teaming up with restaurateur Vic Rallo, who also co-own Barca on New York’s Staten Island, to buy Esca.

They shut it down in May, refreshed it and reopened it in early September.

Related: The Young Man & The Sea

“I ran the business basically for 20 years without him,” he said of Batali. “I was guilty by association.”

Now free of that association, Pasternack has revamped the menu, adding a Berkshire pork Milanese — pounded thin, breaded and served with a hot pepper salad — and a 24-day dry-aged Prime sirloin steak.

“I always thought customers wanted a little bit more variety. Five people go out, there’s a good possibility that one of the five doesn’t eat seafood,” he said, his verbal cadence reflecting his heritage as a native of Long Island, which stretches east of New York City into the Atlantic Ocean and where he grew up fishing, and where he now lives with his wife and daughter and continues to fish in his spare time. 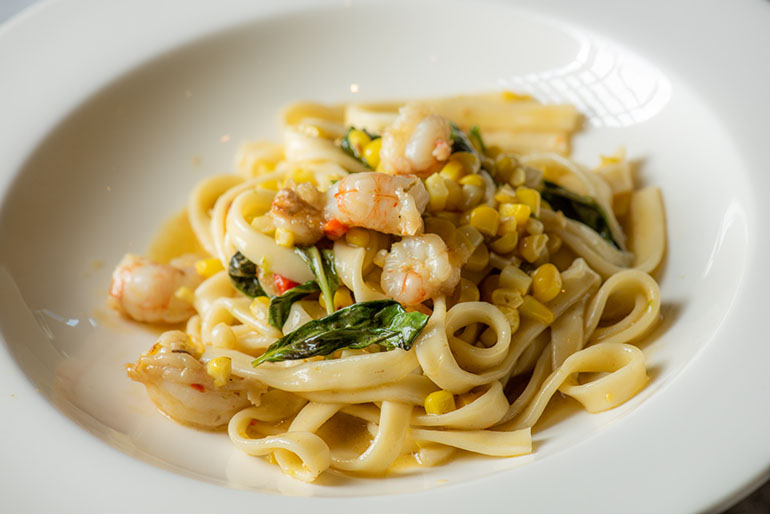 Classics like spaghetti with lobster, sheep’s milk ricotta gnocchi and sea urchin pasta with crabmeat are still on the menu, and seasonal newcomers abound, like the Portuguese sardines he had one weekend in September, which he grilled and served with charred Meyer lemon compote.

That garnish was made by charring the lemons and then letting them steam until they were tender, and then adding Calabrese olives and oregano.

“That’s the kind of acidic salty combination that goes with oily sardines,” he said.

He also was stewing monkfish heads, in a sauce of late-summer heirloom tomatoes with capers and small black Taggiasca olives from Liguria.

In another move at menu expansion, Pasternack has installed a slicer for cured meat and fish, some made in-house, but not all of it. 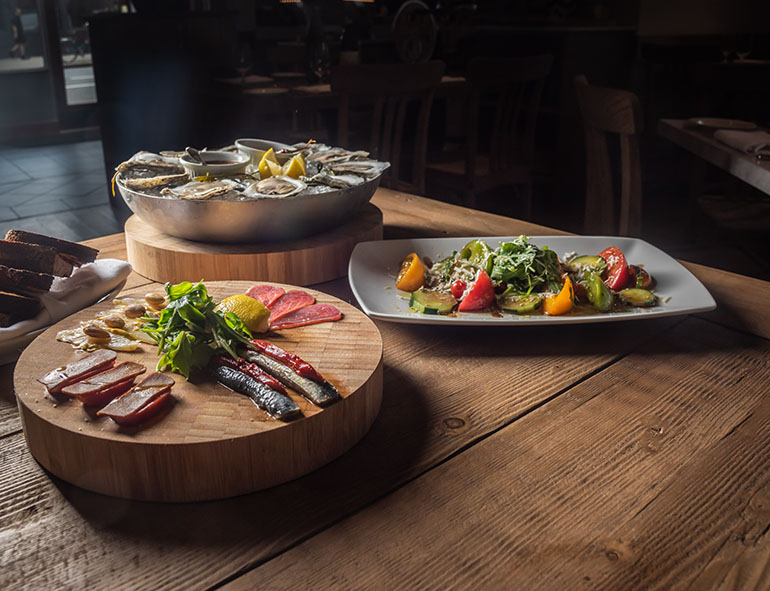 “There are people doing it much better than I could ever make it,” Pasternack said.

Mostly, though, Pasternack’s approach to cooking in general and cooking seafood in particular is not to mess it up and to let the ingredients speak for themselves.

So his fluke crudo is garnished simply with chervil. Skipjack gets a little Marcona almond. Bonita is accompanied a little pressed red mullet roe, or bottarga.

“Basically, a bonita is a large anchovy,” he said. “It’s a real fatty, creamy fish. You add a little bit of a different flavor to it — a little saltiness, that nuttiness that the bottarga has, goes perfect with it.”

Wild salmon recently got some dried pomegranate seeds. Blackfish got some sumac syrup.

“I found these really cool wasabi sesame seeds with black seabass,” he said.

“You start by tasting the fish,” he explained. Blackfish benefits from something acidic that brings out “its shellfishy flavor,” he said. “It needs something to enhance it, because it’s a very mild fish.”

Although “the fish is the fish,” there used to be a lot more of it, Pasternack said a little ruefully. 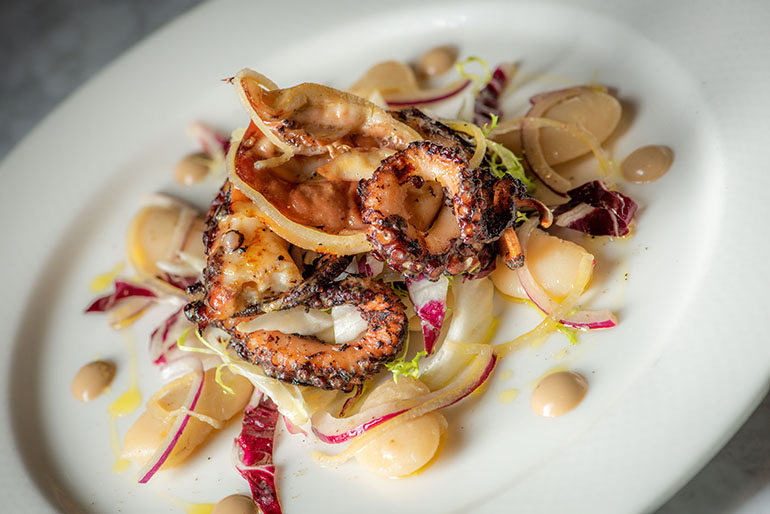 “There used to be a bunch more stuff, like, under the table,” he said. Like shrimp the size of the tip of a pencil, French squid with whole bodies less than an inch across, “true, true baby octopus,” smaller than bite-sized.

“They would label them sardines. You just hoped you didn’t get caught,” he said.

“But everybody kind of plays by the rules now,” he added with a shrug.

But isn’t that necessary to help preserve our fisheries for future generations and safeguard the treasure trove that is our waterways?

“Yeah, it’s good,” he said a little begrudgingly. “You lose out on some things, but it’s good. You try and source some of that stuff, but it’s very hard to find. You work with what’s available.”

That said, and despite everyone following the rules — or maybe thanks to it, since the whole point of sustainable fishing is prosperous oceans — Pasternack said the local fisheries are in good shape and supply most of the large quantities of fish that he buys.

“The people who were most unhappy when I was closed were my fishmongers,” he said.

“Right now there’s plenty of black seabass, you catch a lot of mahi mahi out east [toward the tip of Long Island]. Striped bass is just starting up now.”

Even rare bluefin tuna is on his menu — as a carpaccio with Sicilian olive oil and chives.

“My philosophy is that if the [New York] Department of Environmental Conservation and the National Marine Fisheries [Service] say that it’s okay to fish it … then I’ll buy it. If they say that you can’t buy it, then I don’t buy it.” 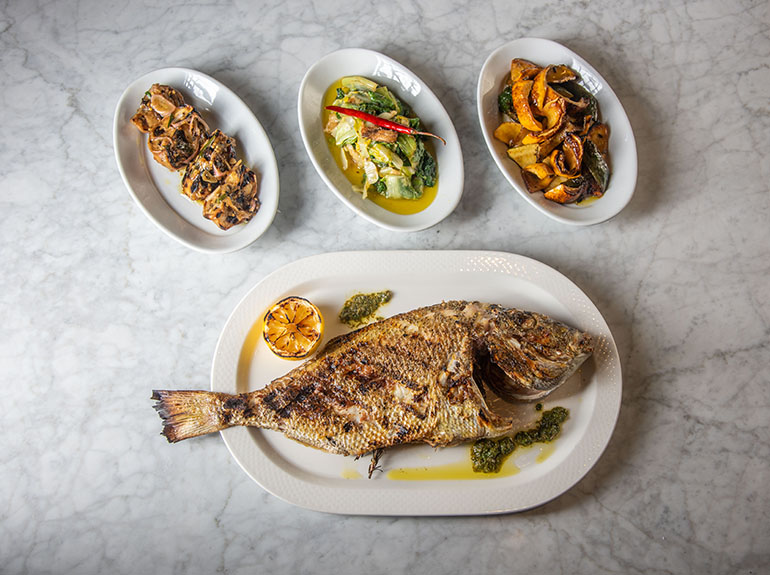 Occasionally he’ll veer out of the North Atlantic if customers have special requests, like Kumamoto oysters from the Pacific Northwest, but he likes to stay local not only for philosophical reasons, but as he says it, “I get the best clams in the world come from here. It’s been like that for 50 years.”

For the fall, Pasternack is eyeing more mushrooms, Kohlrabi and root vegetables.

“I take local striped bass, roasted root vegetables and then a vinaigrette with apple cider. How much ‘fall’er can you get than that?” he said.

“I keep it simple. If you’re spending good money to buy a great piece of seabass, why [mess] it up with all the other [extraneous ingredients] on top of it? The people are paying for seabass.”